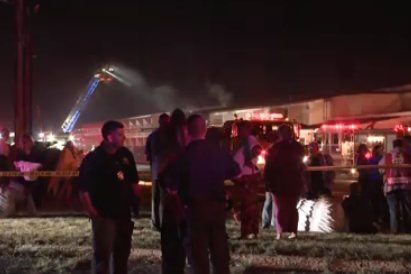 A mother and her five children have died in a massive fire at a motel in Benton Harbor, Michigan, according to authorities. The Berrien County Sheriff's office told CBS News that the 26-year-old mom and her children -- between the ages of two and 10 -- died in the fire at the Cosmo Extended Stay Motel.

There was no word early Saturday morning on what caused the blaze.

CBS South Bend affiliate WSBT reports that a 2-year-old is in the hospital and is being treated for injuries. Officials said that several other people were also sent to the hospital.

Twenty-seven motel rooms were occupied at the time of the fire. Police said the entire motel was affected.

WSBT reports that they spoke with a man who believes the fire may have started inside his room.

"As I woke up my bed was on fire. I said 'Oh my God.' I got my sheets and wet them and I tried to throw them on the bed and as I throw it on the bed it didn't work," said Leroy Johnson, who lives in hotel. "So I asked the person above me for some salt. As I throw salt on there I hurry and jump out and once I jump out the hole room explode flew."

The Berrien County Sheriff's Department is leading an investigation into what caused the blaze and the state fire marshal will also investigate.