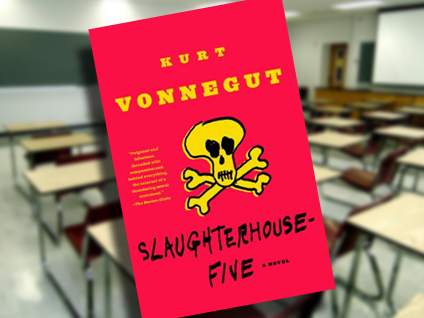 REPUBLIC, Mo. — Two books have been banned from the libraries and curriculum at Republic High School after a parent complained that their content taught principles contrary to the Bible.

The district's school board voted Monday to remove Kurt Vonnegut's "Slaughterhouse-Five" and Sarah Ockler's "Twenty Boy Summer," but to allow Laurie Halse Anderson's "Speak" to be used in the district's high school, The Springfield News-Leader reported.

Superintendent Vern Minor said the board based its decision on whether the books were age-appropriate.

"We very clearly stayed out of discussion about moral issues," Minor said. "Our discussions from the get-go were age-appropriateness."

Wesley Scroggins of Republic, who had challenged the books and lesson plans last year, said he was mostly pleased with the decision.

"I congratulate them for doing what's right and removing the two books," said Scroggins. "It's unfortunate they chose to keep the other book."

It took a year to reach a decision because the complaint prompted the 4,500-student district to form a task force to develop book standards for all its schools, Minor said.

The panel considered existing policies and public rating systems that already exist for music, TV and video games before adopting new standards in April. Those standards were applied to the three books, Minor said.

"It was really good for us to have this discussion," Minor said. "Most schools stay away from this and they get on this rampage, the whole book-banning thing, and that's not the issue here. We're looking at it from a curriculum point of view."

Minor said most people supported keeping "Speak," which is taught in English I and II courses, because although it had one short description of a rape, it had a strong message at the end.

But he said those who read "Twenty Boy Summer," available in the library, thought it sensationalized sexual promiscuity and included questionable language, drunkenness, lying to parents and a lack of remorse. And he said "Slaughterhouse Five" contained crude language and adult themes that are more appropriate for college-age students.

Minor said students will be allowed to use those two books for extra class material if they have their parents' permission.

The Springfield News-Leader writes that Superintendent Minor will next propose a policy that blocks R-rated movies from being shown to high school students.

"That's on my list of other board policies," he told the school board earlier this week.

Minor's description of his proposal to the News-Leader - setting maximum MPAA rating levels for movies shown to elementary, middle and high school students - would prevent teachers from using such films as "Schindler's List," "Saving Private Ryan," "Glory" and Roman Polanski's "Macbeth" in their curriculum.