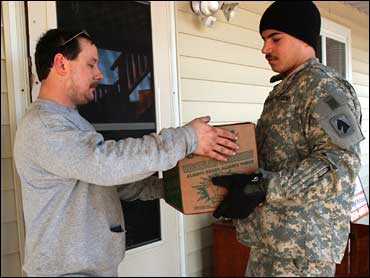 In the first real test of the Obama administration's ability to respond to a disaster, senior Kentucky officials are giving the federal government good marks for its response to a deadly ice storm.

Yet more than 300,000 residents remained without power Monday and some areas had yet to see aid workers nearly a week after the storm, a fact not lost on some local authorities.

The winter blast turned out to be the worst natural disaster in Kentucky's history, reported CBS News correspondent Hari Sreenivasan. More than 5,000 utility workers were working around the clock to get people back online.

"We haven't seen FEMA. They haven't been here," said Jaime Green, a spokeswoman for the emergency operations center in Lyon County, about 95 miles northwest of Nashville, Tenn.

Federal authorities insisted they responded as soon as the state asked for help and promised to keep providing whatever aid was necessary.

FEMA has been under the microscope since the Bush administration's botched response to Hurricane Katrina in 2005, which Barack Obama and other Democrats made a favorite topic on the presidential campaign trail. FEMA was reorganized and strengthened after that, and it has avoided the onslaught of negative feedback Katrina generated.

The agency hasn't been tested the same way it was after the hurricane, however.

Gov. Steve Beshear raised Kentucky's death toll to 24 on Monday, meaning the storm has been blamed in at least 55 deaths nationwide. And while it also knocked out power to more than a million customers from the Southern Plains to the East Coast, it's still considered a medium-sized disaster, the kind FEMA has traditionally been successful handling.

The Kentucky disaster will be closely watched, said Richard Sylves, professor of political science at the University of Delaware, particularly because Obama hasn't yet named the top FEMA officials, many of whom must go through Senate confirmation.

"If it's perceived not to be handled very well, or if there's a sense that there's insensitivity at the federal level to the plight of people suffering, I imagine the people President Obama has appointed to senior positions in FEMA will be grilled in their confirmation hearings," said Sylves, who has written four books on federal disaster policy.

Beshear asked Obama for a disaster declaration to free up federal assistance Thursday, two days after the storm hit, and Obama issued it hours later. Trucks loaded with supplies began arriving at a staging area at Fort Campbell, Ky., on Friday morning, said Mary Hudak, a spokeswoman for the Federal Emergency Management Agency.

On Saturday, Beshear ordered all of the state's Army National Guardsmen into action to distribute supplies, many of which came from FEMA. Sreenivasan reported that the 4,600-strong force was checking on rural residents door-by-door.

Beshear has consistently praised Obama, a fellow Democrat, for the attention he's devoted to the disaster.

"We have had tremendous and quick response from President Obama and his administration," Beshear said Monday. "I don't think any of our folks that have dealt with disasters before ever recall as quick a response as we got last Wednesday."

Trina Sheets, executive director of the National Emergency Management Association, based in Lexington, Ky., said that from what she's heard, FEMA's response has been very good so far. Her group represents emergency management directors from all 50 states.

"The governor's declaration request for an emergency was turned around very, very quickly by FEMA and the White House," said Sheets, who just had her power restored Monday after four days without it. "And President Obama has spoken with the governor of Kentucky on several occasions throughout the event."

Sheets said she hadn't heard any complaints so far about the federal response.

"FEMA and the Kentucky National Guard are doing everything they can to get things back up and running," Sen. Jim Bunning said.

By Monday, FEMA officials were checking in on supply distribution points in some rural areas. FEMA official Don Daniel stopped by to ask emergency management officials in Grayson County, who had criticized FEMA's absence late last week, what they needed.

More generators, they told him, to keep essential services such as hospitals and water supplies running.

"If they need more, they'll get them," Daniel said. "That need has to be met."

Federal authorities hadn't made it everywhere yet, however.

Brocton Oglesby, director of emergency management in Hopkins County, said he has seen virtually no contribution from FEMA in the county, where more than half of the 27,000 homes remained without electricity.

"They need to be here - at least a presence, a liaison to work with us, to start feeding information and gearing up for the next stage," Oglesby said. "That's where they're going to be needed the most."

Oglesby's seen FEMA show up after other disasters to assess the damages and write checks. Beshear asked for FEMA to have a role on the front end this time, though, and Oglesby said that hasn't happened.

"As soon as they want to come in and start working, we're ready to go," he said.

Oglesby said he would like FEMA to bring in outside electricians to help go door to door to make sure the electricity is operational in each house once it comes back on.

"Right now, mom and pop are going to have to fend for themselves and find an electrician," Oglesby said. "This is where we're needing FEMA's presence."