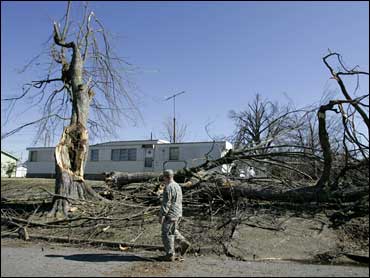 Almost half a million homes and businesses are still without power after last week's ice storm that has left 55 people dead.

The hardest hit state was Kentucky, where CBS News correspondent Hari Sreenivasan reports every National Guard member in the state has been called into service - 4,600 strong. They are checking on rural residents door by door.

It's the worst natural disaster in the state's history.

More than 5,000 utility workers have been working around the clock, there are still more than 255,000 people without power, Sreenivasan reports.

In neighboring Arkansas, 119,000 are in the dark. The ice storm's devastation reaches into Indiana, Ohio, Oklahoma and Missouri, where about 44,000 homes and businesses remain without power.

Kentucky Gov. Steve Beshear is asking President Barack Obama to speed up federal aid dollars as costs spiral past $45 million for emergency work to restore power, hand out water and food and clear debris across the state.

Beshear raised his state's death toll to 24 on Monday. He said in a letter to Mr. Obama that 10 of the deaths were from carbon monoxide poisoning and at least nine others from hypothermia.

Mr. Obama signed federal emergency declarations last week for Kentucky, Arkansas and Missouri after ice and snow blamed for power outages that peaked at 1.3 million customers from the Southern Plains to the East Coast.

Gov. Beshear said he would ask the president to upgrade the federal response by declaring a major disaster, which would open the door for immediate financial assistance. The current disaster declaration provides for federal assistance with material, such as generators and bottled water being distributed by the Federal Emergency Management Agency.

The Democratic governor said the tab for the cleanup already exceeded $45 million, the threshold for receiving a major disaster declaration. "That number may well increase," Beshear told The Associated Press.

Near Crayne, Ky., Bill and Gwen Wilson have been living without power for a week now, Sreenivasan reports. They wear their coats around a natural gas fireplace for warmth, and use a barbeque grill in the tool shed for a stove.

"It may not be a perfect meal but we have a meal," Gwen said.

But she is on her last tank of the oxygen that she needs at night, Sreenivasan reports.

"It's all right, I'm still breathing," she said.

Kentucky had the most power outages last week, a state record of 700,000 customers. By Sunday night, the figure had dropped to less than half that. Still, it could be weeks before some people have power again.

"It's going to be a long haul for us," Beshear said Sunday as he toured hard-hit areas in and around Elizabethtown. "We've thrown everything we have at it. We're going to continue to do that until everyone is back in their homes and back on their feet."

In Arkansas, many residents in the northern part of the state will spend another week without electricity as utility crews work to replace thousands of poles and eventually work house to house to restore power.

In Kentucky, thousands of National Guard troops, some wielding chain saws, cleared debris from roads and rolled through neighborhoods in Humvees to deliver chili and stew to relieved residents.

"The kids were looking out the windows and yelling, 'Yay! We're saved!"' said Bryan Bowling, 30, who's been hunkering down with 18 people next to a fireplace inside his generator-powered home in rural Grayson county, some 90 miles southwest of Louisville.

"It's just good to know that people care," said Bowling, who has a 7-year-old and a 4-year-old.

Emergency generators were in demand, and 52-year-old David Strange was out Sunday installing the units at rural homes in west Kentucky. Strange bought 200 generators and was selling them for markups of around $50 to $100, including delivery down remote country lanes, earning the nickname "the generator man."

His customers included an elderly couple fearful they couldn't run a dialysis machine. "I just don't know how to put what he's done for us into words," said Janeen Timmons, 62, the dialysis patient.

By Sunday night, 93 of Kentucky's 120 counties along with 71 cities had declared a state of emergency, according to Monica French, a spokeswoman for the Kentucky Division of Emergency Management.

In Hardinsburg, one door-to-door check of houses without electricity is being credited for saving the lives of an elderly couple. The Kentucky National Guard said in a press release that two airmen visited the couple's home Sunday and found the wife apparently confused and the husband complaining of nausea.

Both were treated and released at a hospital. Authorities said carbon monoxide levels were more than twice what is considered lethal, and blamed the poisoning on a faulty gas furnace.

Diana Burba was among thousands of people who received cases of bottled water from the National Guard. Burba has no power, and she can't drink the muck coming out of her faucet.

"It's like muddy water comes out," Burba said in her Bonnieville mobile home.

"You don't know how much you depend on it," she said of amenities like clean water and electricity. "When you don't have it, life kind of halts."

The troops, utility workers and good-natured civilians took advantage of temperatures near 50 across much of the region to make headway on repairs. The National Weather Service warned the melt could cause some flooding, but temperatures could dip back into the 20s and teens by Monday night.