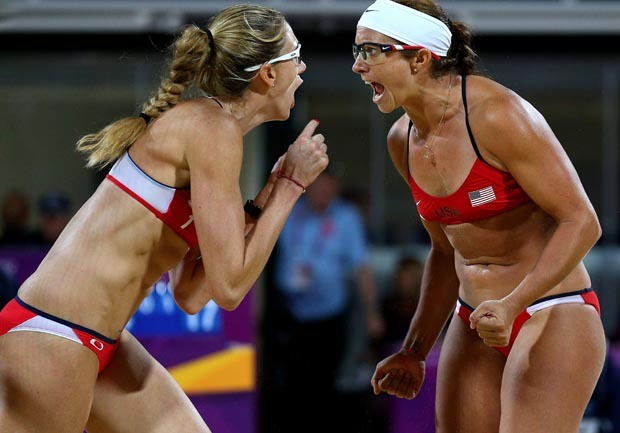 (CBS News) Family was the compass that led Misty May-Treanor and Kerri Walsh Jennings on their paths to their recording-setting Olympics win Wednesday in London.

Both woman, who together made history by winning their third consecutive Olympic gold medal in women's beach volleyball, learned love of the game from their parents.

May-Treanor, 35, is the daughter of Butch May, an American professional beach volleyball player who competed in the 1968 Olympics in Mexico City. Her mother, Barbara, was a ranked tennis player, and according to her official website, young Misty grew up playing volleyball with her parents at the Santa Monica Pier. May-Treanor was 8 when she entered her first volleyball tournament with her father.

At Newport Harbor High School, she helped her team win two state championships in indoor volleyball and she played volleyball for the Long Beach State 49ers from 1995 to 1999. May-Treanor captained the 1998 team that was the first women's NCAA volleyball team to have an undefeated season.

Playing in the Olympics seems to be another May family tradition. In addition to her and her father, May-Treanor's cousin, Taylor Dent, is an Olympian, having competed in tennis at the 2004 Olympics in Athens, where May-Treanor picked up her first gold medal.

Jennings' love of the game was passed down from mother to daughter. Like May-Treanor, Jennings, 33, grew up in California, the daughter of Margery Lee and Timothy Joseph Walsh. Her mother was a high school volleyball player.

Jennings led her Archbishop Mitty High School indoor volleyball team to three state championships. She also was on a championship basketball team in one of those years.

At Stanford University, she won national titles in 1996 and 1997 and was a four-year first-team All-American.

It has been widely reported that May-Treanor and Jennings, called by many the greatest beach volleyball team of all time, actually played against one another both in high school and in college.