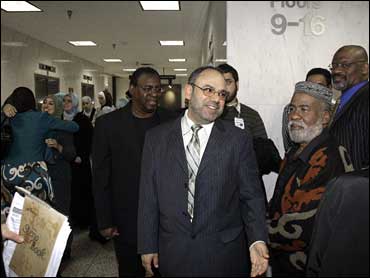 A judge declared a mistrial Monday for most former leaders of a Muslim charity charged with financing Middle Eastern terrorists after jurors failed to reach a verdict.

One of the defendants, former Holy Land Foundation for Relief and Development Chairman Mohammed El-Mezain, was acquitted of most charges.

The outcome came about an hour after a confusing scene in the courtroom, in which three former leaders of the group were initially found not guilty. But when jurors were polled, three said those verdicts were read incorrectly.

In all, five former Holy Land leaders and the charity were accused of providing aid to the Middle Eastern militant group Hamas. The U.S. government designated Hamas a terrorist group in 1995 and again in 1997, making financial transactions with the group illegal.

The mistrial was at least a temporary victory for the five former Holy Land leaders, who said they ran a legitimate charity that helped Muslim children and families left homeless or poor by the Israeli-Palestinian conflict.

Jurors said Thursday that they had reached a verdict after 19 days of deliberation. But a magistrate ordered it sealed until Monday so that the judge and all the prosecutors who handled the case could be present.

After a long weekend of waiting, things quickly got confusing in the courtroom Monday.

Three former leaders of what was once the nation's largest Muslim charity were initially found not guilty of funneling illegal aid to terrorists. Charity fundraiser Mufid Abdulqader was cleared on all counts. Two others — former chairman El-Mezain and the group's New Jersey representative, Abdulrahman Odeh — were acquitted on most counts.

Then as U.S. District Judge A. Joe Fish was going through the typically routine process of asking each juror about his or her findings, three of them surprisingly said the verdicts read in court were wrong.

The move caught the jury forewoman off guard.

"When we voted, there was no issue in the vote," she said. "No one spoke up any different. I really don't understand where it is coming from. All 12 made that decision."

About an hour later, Fish said he received a note from jury saying 11 of 12 feel further deliberations will not lead them to reach a unanimous decision. He declared a mistrial shortly after that.

Fish said he plans to send the case back to court for reassignment, although it's not clear if the government will retry the defendants. A gag order preventing those involved from speaking about the case still stands, the judge said.

The jurors did say it found El-Mezain guilty of one count of conspiracy to provide material support to a foreign terrorist organization, but acquitted him of 31 other charges.

Even before the confusion, jurors had not reached verdicts on charges against Holy Land Foundation for Relief and Development as well as former chief executive Shukri Abu Baker and former chairman Ghassan Elashi.