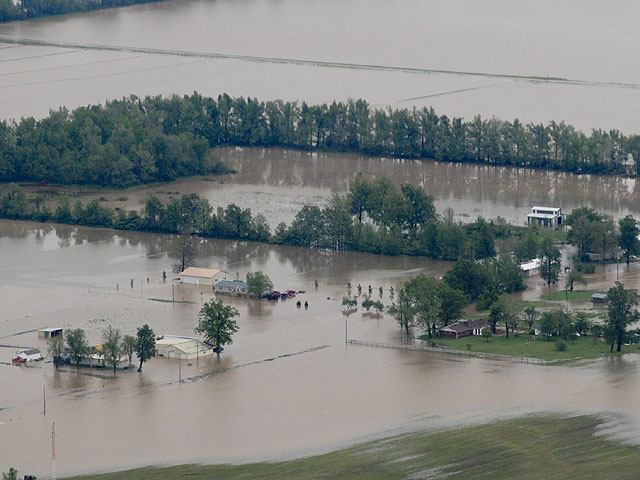 POPLAR BLUFF, Mo. - A powerful storm system that spawned a deadly tornado in Arkansas caused rivers to swell Tuesday across the Midwest, straining levees that protect thousands of homes and forcing panicked residents of one town to flee for higher ground.

Six inches of rain fell Monday alone in the southeastern Missouri community of Poplar Bluff, bringing the four-day total to 15 inches. The deluge caused the Black River to pour over a levee in 30 places, and forced 1,000 homes to be evacuated.

Deputy Police Chief Jeff Rolland said it was a "miracle" that the levee had held until late morning. He credited emergency crews for their work to bolster weakened areas of the barrier and for evacuating residents.

The damaged levee failed a federal inspection after a 2008 flood. Tony Hill of the U.S. Army Corps of Engineers told The Associated Press Tuesday the levee protecting Poplar Bluff received an "unacceptable" rating in 2008.

That's the lowest of three rankings the Corps gives to levees.

Hill said the private district that operates the levee was unable to make repairs. Because the problems weren't addressed, the levee no longer qualifies for a federal program that provides money for such repairs.

The levee extended from Poplar Bluff to the town of Qulan downstream, in a sparsely populated area.

Butler County Sheriff Mark Dodd said water pouring through the breach between the two towns was unlikely to make it far enough upstream to threaten Poplar Bluff, a town of 17,000 residents about 130 miles south of St. Louis. Authorities planned to evacuate only homes closest to the breach.

The already-swollen Black River was rising even further, pouring over more than three dozen spots along the levee that protects the southern part of the town of 17,000 residents in the Ozark Mountain foothills, surrounded by the Mark Twain National Forest.

The storm system has dumped relentless rain on several states over the past week, including Arkansas, Illinois, Indiana, Kentucky, Missouri, Mississippi and Tennessee. As the worst of the system moved north and east into Illinois, Wisconsin, Kentucky and Tennessee, the region was bracing for a second round of storms expected to roll into Oklahoma and Arkansas later Tuesday.

The storms spawned at least one tornado Monday in Arkansas that killed four people and carved a wide swath of destruction through the town of Vilonia, 25 miles north Little Rock. And flooding in the northwest of the state caused at least four other deaths.

The National Weather Service office in North Little Rock sent survey teams to Vilonia and nearby Garland County to investigate the damage from Monday's storm and assess how much of it was caused by tornados or straight-line winds.

"It wouldn't surprise me if we were to end up with a count of 10 or 12 tornadoes by the time all the surveys are completed," Robinson said.

Authorities in Mississippi say a 3-year-old girl in the city of McComb was killed when a storm from the same system toppled a large tree into her family's home. The girl's parents, who were in the room with her, were both injured.

More showers and thunderstorms were expected in the area on Tuesday, giving crews that worked overnight to sure-up the levee no rest.

Rolland said street department workers hurriedly filled small boats with sandbags overnight and were able to sure up a vulnerable section of the levee in Popular Bluff.

Crews rescued 59 people in 1½ hours late Monday after water spilled over the dam.

A full-scale levee breach could force the evacuation of some 6,000 homes from Poplar Bluff to Qulin and destroy or severely damage 500 homes in Poplar Bluff and its outskirts, Rolland said.

Already, 23 small businesses in the area's flood plain have taken on water, he said.

Flooding three years ago damaged or destroyed hundreds of homes in Poplar Bluff, raising questions about whether the levee is capable of protecting the town during times of heavy rainfall.

"Unfortunately, with few communities having those sorts of resources, you build them to the level you believe will be adequate. Unfortunately, extraordinary storms come along," Rolland said.

The hotels in town filled up quickly, and 300 people took shelter at the Black River Coliseum, the town's 500-seat concert venue, Rolland said. No deaths or serious injuries have been reported.

Families forced to flee their homes Monday watched as murky floodwater began creeping into their yards and homes. If the levee were to give way, many of those homes would be left uninhabitable. Sandbagging wasn't an option — the river, spurred on by 10 inches or more of rain since last week, simply rose too quickly.

"By the time we realized what was happening, it was too dangerous to sandbag," Butler County Presiding Commissioner Ed Strenfel said.

Governors in Arkansas and Kentucky declared states of emergency. Kentucky was bracing for record flooding over the next few days, partly because the Ohio and Mississippi rivers were both significantly above flood stage. In Cairo, Ill., where the rivers converge, eight families informed authorities that they were heeding voluntary evacuation order, police dispatcher Cheryl James said Tuesday.

The Army Corps of Engineers was considering the extraordinary step of intentionally breaching the Birds Point levee in southeast Missouri, just downriver of the confluence, in a bid to reduce the amount of water moving down the Mississippi. The move would soak 130,000 acres of farmland, and Nixon objected to the idea. A decision was expected Tuesday.

"We certainly don't think blowing that levee is the thing to do yet today, that's for sure," Nixon told "The Early Show." "The bottom line is, there are towns down there also. We want to study that closely. ... Hopefully we'll get a little respite in the weather."

Missouri was still cleaning up from tornado damage in the St. Louis area -- 2,700 buildings, including Lambert Airport, were damaged in the Friday night twister -- when spring flooding went from bad to far worse Monday.

A dam in St. Francois County was in jeopardy of bursting, with a few dozen homes potentially in harm's way. Levees were stressed along the Mississippi River in Pike and Lincoln counties, north of St. Louis.

But by far the biggest concern was Poplar Bluff. The Missouri National Guard sent 200 guardsmen and rescue equipment to the area. Several people had to be rescued by boat, including some who don't live in the flood plain, as heavy rain flooded several streets Monday night.

Police officers spent Monday going door-to-door in the southwest part of town, telling residents to get out. Not everyone did.

Along one road near the levee, children played knee-deep in water. Adults gathered on the porches, seemingly enjoying nature's show.

"I'm not worried. This is my favorite time of the year," 20-year-old Brandon Andrews said, pledging to ride out the flood in his trailer home, even as water lapped against its sides. He didn't have a boat and the water was already too high to drive through, but Andrews said he had been to the store and stocked up on hot dogs, chili and necessities.

Police Chief Danny Whiteley was hoping the water would recede soon enough that flooding would mostly be limited to basements. He wasn't optimistic.

"I guess you'd call it a perfect storm: It's just all come together at once," Whiteley said.