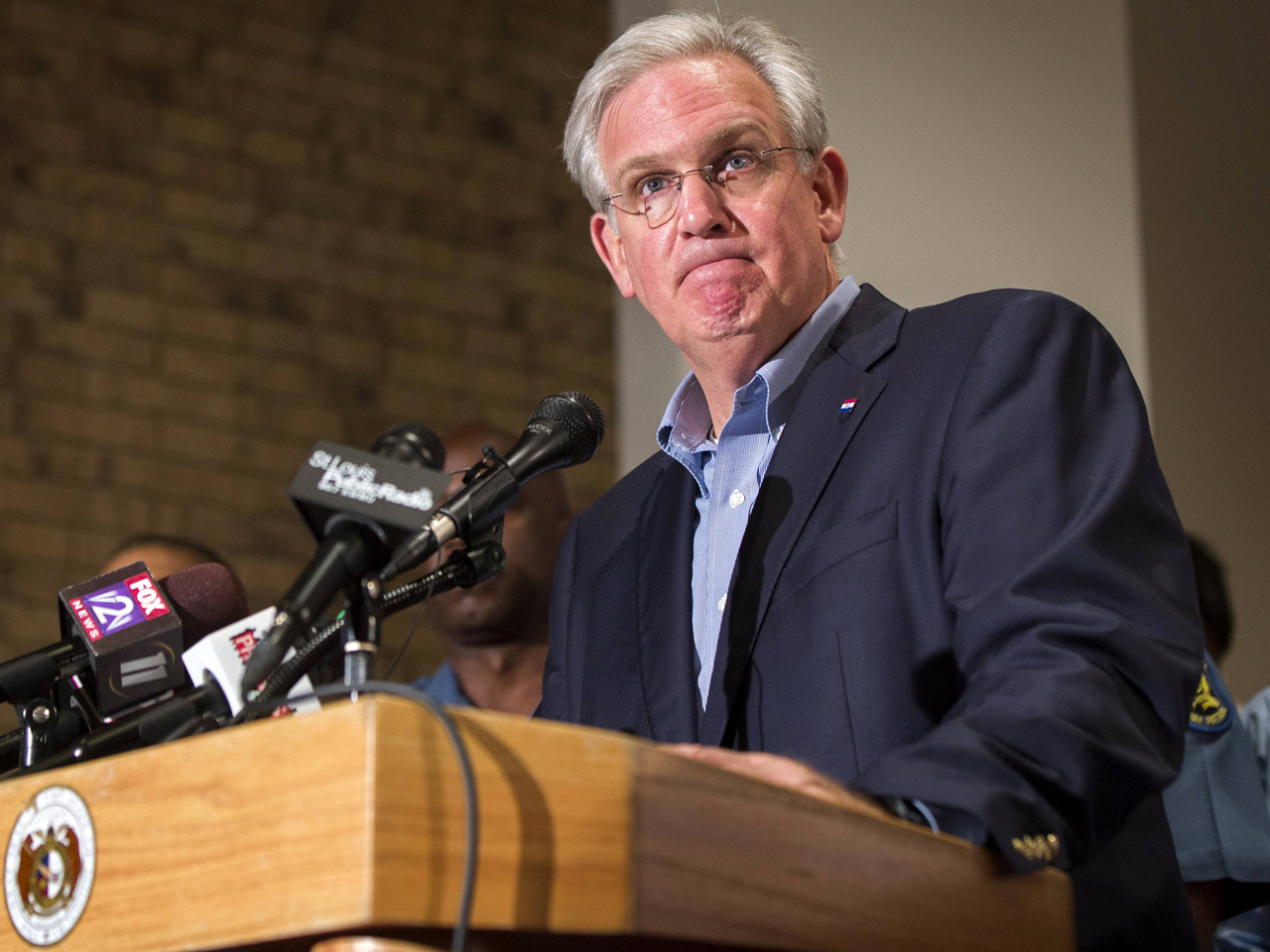 FERGUSON, Mo. -- Missouri Gov. Jay Nixon declared a state of emergency Saturday and imposed a curfew in the St. Louis suburb where a black teenager was shot to death by a white police officer a week ago.

Despite heavy rainfall and lightning, hundreds of protesters gathered Saturday night at a busy thoroughfare that has been the site of previous clashes with police. Dozens of officers, a much more visible presence than the night before, stood watch - including some with shields.

In announcing the curfew, Nixon said that though many protesters were making themselves heard peacefully, the state would not allow a handful of looters to endanger the community. The curfew will run from midnight to 5 a.m.

"We must first have and maintain peace. This is a test. The eyes of the world are watching," Nixon said. "We cannot allow the ill will of the few to undermine the good will of the many."

Darrell Alexander, 57, a registered nurse from nearby Florissant, Missouri, worried Saturday night that the curfew might spur anger and more violence.

"I think it's an antagonistic decision to not allow people to express their freedom of speech. It's an overreaction," he said.

Tensions in Ferguson flared late Friday after police released the name of the officer who fatally shot 18-year-old Michael Brown and documents alleging Brown robbed a store before he died.

Just before midnight, some in what had been a large, rowdy but mostly peaceful crowd broke into that same small store, Ferguson Market & Liquor, and began looting it, Missouri State Highway Patrol Capt. Ron Johnson said. Some protesters yelled at the aggressors to stop what they were doing, and about a dozen people eventually helped protect the convenience store.

CBS News correspondent Vladimir Duthiers reported from Ferguson that police in riot gear were on the scene, some with high-powered rifles trained on the crowd. Despite the tense standoff, rubber bullets were not used.

Nixon also said the U.S. Department of Justice is beefing up its investigation of the shooting.

Johnson, who is in charge of security in Ferguson, said there were 40 FBI agents going door-to-door starting Saturday, talking to people who might have seen or have information about the shooting.

Nixon and Johnson spoke at a church in Ferguson, where they were interrupted repeatedly by people demanding justice and objecting to the curfew.

"If there was an easy way to separate those who hurt from those who helped we would, but it's hard," Nixon said.

Johnson assured those in attendance that police would communicate with protesters and give them ample opportunity to observe the curfew.

"You saw people sitting in the street and they had the chance to get up," he said. "And that's how it's going to continue."

Brown's death had already ignited several days of clashes with furious protesters. Tensions eased Thursday after Nixon turned oversight of the protests over to the Missouri Highway Patrol. Gone were the police in riot gear and armored vehicles, replaced by the new patrol commander who personally walked through the streets with demonstrators. But Friday night marked a resurgence of unrest.

Local officers faced strong criticism earlier in the week for their use of tear gas and rubber bullets against protesters. Johnson said one tear gas canister was deployed Friday night after the group of rioters became unruly.

The officer who killed Brown was identified as 28-year-old Darren Wilson, a six-year police veteran who had no previous complaints filed against him.

The Ferguson Police Department has refused to say anything about Wilson's whereabouts.

Wilson has been on paid administrative leave since the shooting. St. Louis County prosecutor Bob McCulloch said it could be weeks before the investigation wraps up.

St. Louis County Executive Charlie Dooley asked Missouri Attorney General Chris Koster on Friday to take over the case, saying he did not believe McCulloch could be objective. Koster said Missouri law does not allow it unless McCulloch opts out, and McCulloch spokesman Ed Magee said the prosecutor has no plans to surrender the case.