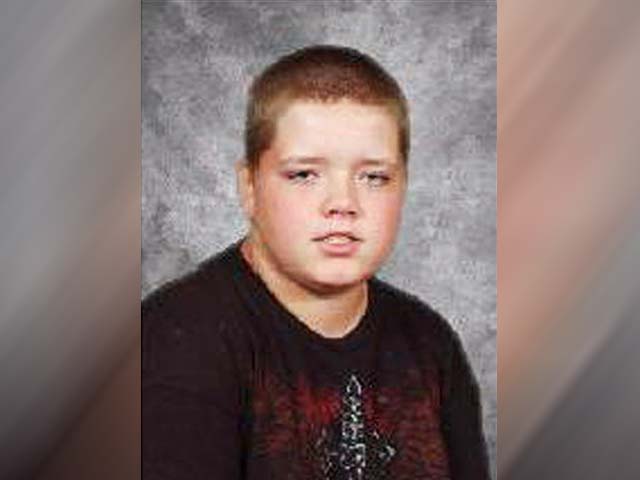 EDMONTON, Ky. - A troubled 15-year-old shot and killed relatives who had taken him in because his mother could not control him, then stole their car and fled with the younger girlfriend they had ordered him not to see, police and family members said.

Police who issued an Amber Alert for 15-year-old Christopher Endicott, fearing he might be in danger after his guardians were found dead in their home, instead charged Endicott Wednesday with murder in their killings.

The alert was issued Tuesday after Gary and Barbara Holloway's adult son found them dead in their bed Tue. at their home near Edmonton, more than 100 miles south of Louisville. The public was asked to be on the lookout for a 12-year-old girl who had been reported missing by her parents and was later found unharmed with the 15-year-old. She has not been charged.

"At the onset of the investigation we had to consider every possible scenario, the possibility that they were perpetrators as well as victims," state police trooper Bill Gregory said.

The Amber Alert described the Holloways' car, and police say a firefighter alerted them after he saw it in Barren County. Gregory said the firefighter followed the car until state police cruisers caught up with it. There was a short chase when police tried to pull the car over about 15 miles from where the couple was found, and the 15-year-old drove off the road. Police say he and the 12-year-old ran away but were caught quickly.

Police interviewed the two and said Wednesday morning that Endicott had been charged with murder, fleeing and evading, wanton endangerment, criminal mischief, reckless driving and driving without a license. They have not said whether he will be charged as an adult. The girl was released to her parent.

Family members said the Endicott was an eighth-grader at the local middle school who habitually got in trouble for bringing cigarettes to school, bullying other children, and talking back to his teachers.

Barbara Holloway, his second cousin, had taken him in three months ago, said her sister, Ruby Whitehead. Family members said his father is in prison.

"He's always been abandoned his whole life," said Elizabeth Osborn, a friend of the Holloway's son, Stephen. "... I guess the first people who showed him love, he didn't know how to take it."

Barbara Holloway would sometimes have to pick him up an hour after school had started because he had been suspended.

Then there was the relationship with the 12-year-old, which Osborn said both the Holloways and the girl's mother tried to end. There was no indication the girl was involved in the killing, and police said she was released after they questioned her.

"We had been trying to fight it and keep them apart," Osborn said. "Barb had grounded him from seeing her or talking to her."

Endicott was being held Wednesday at the Adair County Youth Development Center. In addition to murder, he is charged with fleeing and evading, wanton endangerment, criminal mischief, reckless driving and driving without a license. Authorities have not said whether he will be charged as an adult. The Associated Press generally does not identify juveniles charged with crimes.

Osborn said she and Stephen Holloway discovered the bodies Tuesday when they went to check on Barbara and Gary Holloway because they could not reach them on the phone. She said $1,000 had been taken and someone had dropped off the couple's dog at an adult day care center.

"We walked in the house, and they were in the bed dead," she said.

They called police, who issued the Amber Alert, which described the Holloways' car. Volunteer firefighter Moe Hensley told The Associated Press he heard the alert several times on his way home, then spotted the car and called a dispatcher, who contacted state police.

"I happened to be in the right place at the right time," he said.

There was a short chase when police tried to pull the car over about 15 miles from where the Holloways were found, and the 15-year-old drove off the road. Police say Endicott and the 12-year-old ran away but were caught quickly.

"It should have been more like, `We need these two people caught right away,"' she said. "... Not an Amber Alert that made people think they were in danger because they were never in danger."

But police defended the alert, saying they did not know exactly what had happened.

"At the onset of the investigation we had to consider every possible scenario, the possibility that they were perpetrators as well as victims," state police trooper Bill Gregory said.

State police say more charges could be filed after a grand jury investigation.