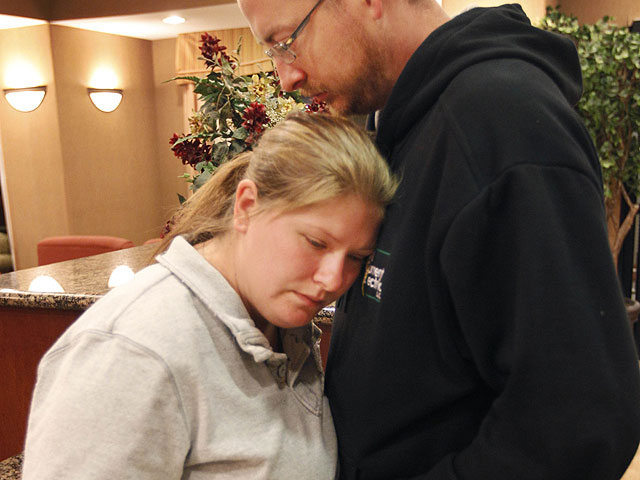 KANSAS CITY, Mo. - The mother of a 10-month-old girl who went missing from their Kansas City home said police told her she failed a lie detector test and accused her of being involved in her baby's disappearance.

Deborah Bradley said Friday that police never showed her the results of the test and denied knowing anything about what happened to her daughter, Lisa Irwin. Bradley and the baby's father, Jeremy Irwin, say Lisa was abducted from her crib late Monday or early Tuesday.

"They said I failed (a polygraph test)," Bradley, 25, told the Associated Press. "And I continued to say that's not possible because I don't know where she's at and I did not do this."

Irwin, 28, said he also offered to take a test but that police said that was not necessary.

Kansas City police spokesman Steve Young declined to comment Thursday on whether the parents have been tested, citing the ongoing investigation.

Bradley and Irwin, both dressed in jeans and sweatshirts, held hands and teared up several times during the 20-minute interview. They reiterated that their main focus "is to bring Lisa home."

"We need her. We have to have her. She's our link that ties everybody together," Irwin said.

They said police have treated them like suspects and that Bradley in particular has been preparing for the possibility of charges being filed against her.

The mother said detectives told her: "'You did it. You did it. And we have nothing."'

Irwin, an electrician, says he returned from work around 4 a.m. Tuesday and discovered Lisa was missing. Bradley says she last checked on the child around 10:30 p.m. and that when Lisa disappeared she was asleep in her bed with her 6-year-old son and a stray kitten they found earlier in the day. The parents say they discovered their front door unlocked, a window open and house lights blazing, lending credence to the theory that the baby may have been snatched by an intruder.

"The main problem I think that we're facing is that everybody (else) has an alibi," Irwin said. "I was at work. I've been cleared. All these other people we were worried about ... the FBI said they've been cleared. The only one you can't clear is the mother that's at home when it happens `cause there's nobody else there."

On Thursday, police told reporters that Bradley and Irwin were no longer cooperating with authorities in their investigations, but the family later released a statement insisting they had never stopped.

The parents reasserted their commitment to the investigation Friday, saying they are not angry with how things have gone and that they understand police have a difficult job to do.

"Don't get me wrong. I understand why they did what they did," Bradley said. "You see stuff like this everywhere. You watch the TV, and there's some crazy person doing something insane. There's been too many times stuff has happened. They have to assume what's worst ... but it felt like it was taken really, really far."

The parents also said their three cellphones had been stolen, but Young said the missing phones had not produced any leads.

Investigators focused their search Thursday on a heavily wooded area, sewers and an industrial park. About 100 officers scoured the industrial area and adjacent woods, while others were lifting drain covers and crawling inside.

But by Thursday evening authorities announced they were shutting down the command post about a mile from the family home. Police spokesman Darin Snapp sent out a news release saying authorities believed they had done everything they could "regarding geographic searches."

Lisa has blue eyes and blonde hair, is 30 inches tall and weighs around 28 pounds. She was last seen wearing purple shorts and a purple shirt with pictures of white kittens.