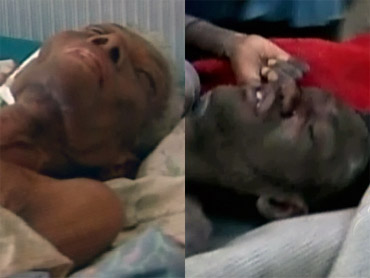 After being trapped in rubble for nearly 10 days, an Israeli Search and Rescue team saved a 22-year-old Haitian man from a collapsed three-story building. The man was transferred to an Israeli Defense Field Hospital and is in stable condition.

"American and French doctors were unable to rescue the trapped man and called upon the Israeli delegation's search and rescue teams who rescued the man within half an hour, from a tunnel, 2.5 to 3-meters long and were able to release him whole and healthy," said Maj. Zohar Moshe, a member of the rescue team.

Rescuers were directed to the man, trapped near the presidential palace, by local residents. CBS News correspondent Bill Whitaker reports rescuers found him dehydrated but uninjured.

Earlier Friday, a 84-year-old Haitian woman was pulled from the rubble 10 days after Haiti's killer earthquake, but a doctor treating her said she is in bad condition and may not survive.

Relatives of Marie Carida Romain say they freed her Friday from the ruins of her house.

Yves Romain, a 58-year-old telephone technician, said he and his family were sleeping in front of the collapsed home when they heard moaning from inside and called neighbours for help. After 20 hours of digging with bare hands, he said, they freed his mother.

The woman, looking skeletal and unconscious, was being treated at the capital's General Hospital. "She is very thin. She is in a state of shock and severely dehydrated," said Dr. Louis Auguste, who works at Long Island Jewish Medical Center in New Hyde Park, New York.

He said that while she had been buried for a long time, "there were always people who defy the norm."

The latest rescue comes as Haiti begins to wind down its search-and-rescue operation, instead shifting focus to keeping earthquake victims alive.

"We all hope that others have survived and can be found, but the more days that go by without signs of life, the dimmer these hopes will become," U.N. mission spokesman David Wimhurst said.

Haiti's government estimates the Jan. 12 quake killed 200,000 people, as reported by the European Commission. It said 250,000 people were injured and 2 million homeless in the nation of 9 million. Others offer smaller estimates.