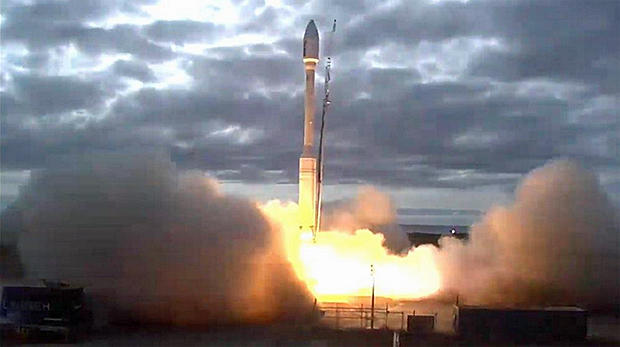 A renamed and upgraded Orbital ATK Minotaur-C rocket carrying 10 commercial Earth observations satellites vaulted into orbit Tuesday after a fiery Halloween takeoff from Vandenberg Air Force Base, the first flight of the four-stage solid-fuel booster since back-to-back failures derailed an earlier version of the launcher.

Using pad 576E at the sprawling Air Force base northwest of Los Angeles, the slender 104-foot-tall Minotaur-C flashed to life at 2:37 p.m. PDT (GMT-7, 5:37 p.m. EDT) and soared away to the south trailing a brilliant jet of flame from its Castor 120 first-stage motor.

All four of the Minotaur-C's stages appeared to fire normally and the six SkySat satellites were successfully released, one at a time at 20-second intervals, into a 315-mile-high orbit. The four nine-pound Dove cubesats were released a few minutes later.

The launch vehicle was out of contact with the ground at the point, but contact resumed later, confirming successful satellite deployments.

Going into Tuesday's flight, Planet boasted a constellation of 190 small satellites, 172 of which are actively imaging. Each Dove satellite, about the size of a loaf of bread, is capable of snapping 10,000 images every day covering an area the size of Mexico. Altogether, the fleet can photograph the landmass of the entire planet every 24 hours.

Once on the ground, the imagery can be quickly analyzed by customers using software designed to detect environmental changes as well as human activity.

The six new SkySats joined seven others already in orbit while the four Doves will join their sister craft in Planet's globe-spanning cubesat constellation after using their solar panels and atmospheric drag to maneuver into position.

The successful launch was a relief to Orbital ATK engineers. The last flight of an earlier version of the rocket, known as the Taurus XL, ended in failure in 2011 when the nose cone fairing protecting a NASA Earth science satellite during the booster's climb out of the thick lower atmosphere failed to separate.

It was the second fairing-related failure in a row for the Taurus, prompting NASA to move another satellite to a different launcher.

In the wake of the 2011 failure, Orbital upgraded the rocket, gave it a new name and a redesigned fairing system. During Tuesday's launch, the fairing separated as planned about three minutes after liftoff.

The Minotaur-C is capable of boosting payloads weighing up to 3,500 pounds to low-Earth orbit.