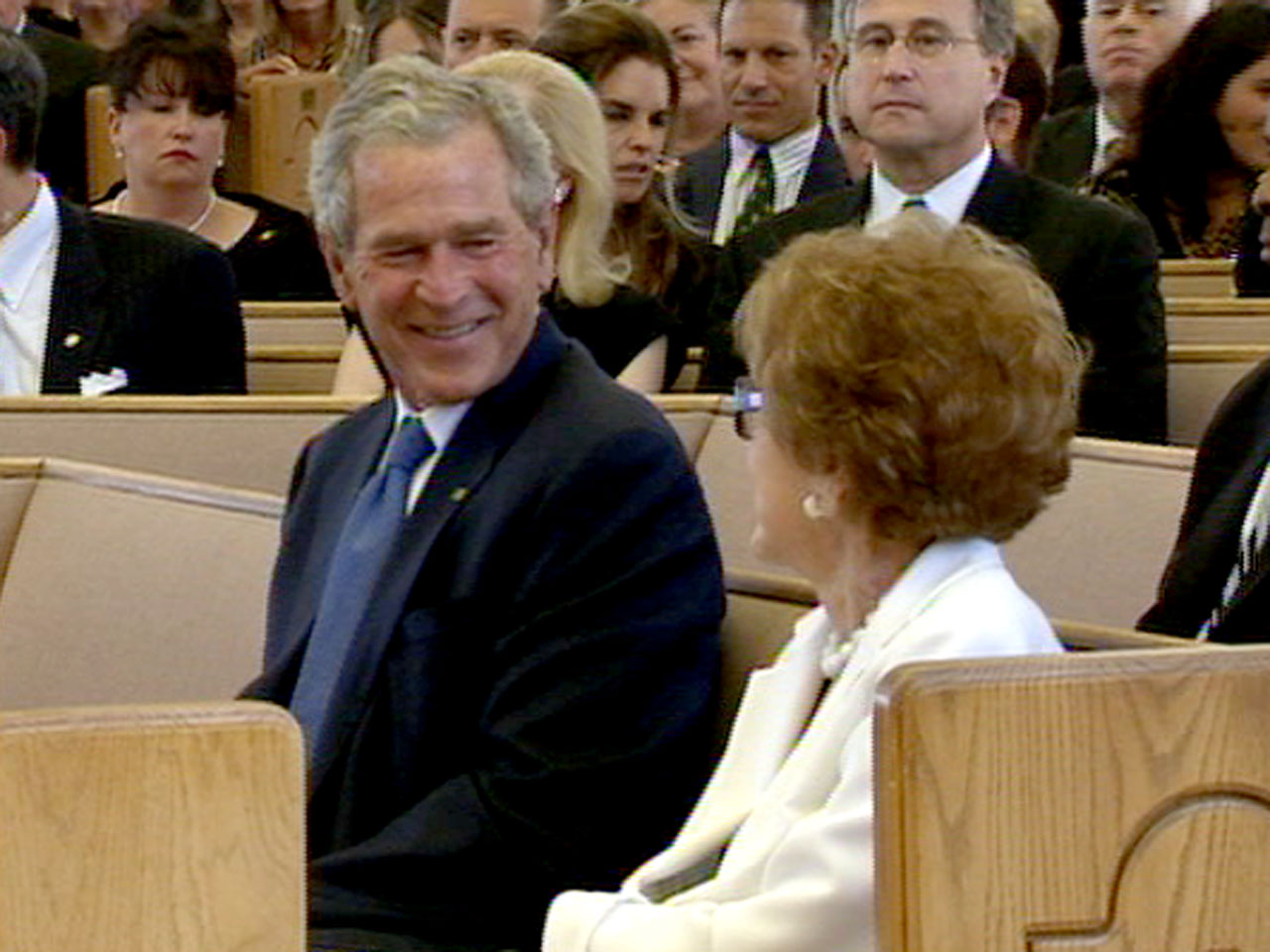 PALM DESERT, Calif. -- First ladies, past and present, and others who called the White House home remembered Betty Ford on Tuesday, not just for her decades-long work against substance abuse but for her contributions to a political era when friendship among lawmakers helped them govern.

Speakers, including former first lady Roslynn Carter and journalist Cokie Roberts, also hailed her as a force of nature whose boundless energy and enthusiasm, coupled with a steadfast determination to do what was right, pushed the country toward a commitment to equal rights for women and other causes.

Ford, who died at the age of 93 on Friday, reshaped the role of first lady with her plain-spoken candidness.

In doing so, she helped bring such previously taboo subjects as breast cancer into the public discussion as she openly discussed her own battle with the disease. She was equally candid about her struggles with drug and alcohol abuse, and her spearheading of the creation of the Betty Ford Center to treat those diseases has benefited thousands.

"Millions of women are in her debt today and she was never afraid to speak the truth even about the most sensitive subjects, including her own struggle with alcohol and pain killers," Carter said. "She got some criticism, but I thought she was wonderful and her honesty gave to others every single day."

Behind the scenes she was also aggressive and effective, said Roberts, who noted that Ford's late husband, President Gerald R. Ford, confided to her privately that his wife badgered him relentlessly into stronger public support of equal rights for women.

The former first lady mapped out plans for her funeral well in advance, including who would deliver her eulogies, and Roberts said she told her to be sure to let people know that politics does not have to as acrimonious as it is today.

"Mrs. Ford wanted me to remind everyone of the way things used to be in Washington, and I wouldn't be surprised if she timed her death so she could deliver the message of comity when it was so badly needed," she said as former President George W. Bush, a Republican, sat in the audience next to Secretary of State Hillary Rodham Clinton, a Democrat.

Bush, accompanied by former first lady Nancy Reagan, arrived just a few minutes ahead of Michelle Obama and the others. The former president, wearing a dark suit, blue tie and white shirt, chatted quietly with Reagan as they waited for the services to begin. He greeted Clinton as she took a seat next to him.

"It's very nice to see you getting together after the fact, but we wish some of you would get together beforehand," Roberts said of those in the audience.

Following the funeral, members of the public were invited to file past the casket and sign a guest book until midnight.

Later Thursday, her body will be interred at the presidential museum along with her husband on what would have been Gerald Ford's 98th birthday.

Ford, the accidental first lady, was thrust into the White House when Nixon resigned as president on Aug. 9, 1974, and her husband, then vice president, assumed the nation's highest office. Although she always said she never expected nor wanted to be first lady, she quickly embraced the role.

When Roberts' father, Democratic Congressman Hale Boggs, was the House majority leader and Ford's husband was the House minority leader, Roberts recalled, they could argue about issues but get together as friends afterward. Their families became close, as did the Ford and Carter families, despite Jimmy Carter defeating Ford in the 1976 presidential election.

On Tuesday, California Highway Patrol motorcycles and squad cars escorted Ford's hearse and her family members to the service in four black sedans and six SUVS. The hearse pulled up to the church's side entrance, and the casket was carried inside, followed by about two dozen mourners, including family members.

Other mourners arrived later by the busload, after the family was given private time inside the church. Family spokeswoman Barbara Lewandrowski said family members had also gathered over the weekend to reflect on Ford's life.

"They are reading emails and telling stories, enjoying each other's fellowship," she said.

A program prepared for the service featured a picture of Ford, the Emily Dickinson poem "If I Can Stop One Heart From Breaking," and the words, "The family thanks you for your support," followed by the signatures Mike, Jack, Steve and Susan, Ford's four children.

"We know of Mom's love, her love, her love of God and it's personal touch on her life bringing good out of evil, healing out of brokenness, joy and dancing, yes dancing. She was quite a dancer ... dancing out of sorrow," her son Michael Ford told mourners.

Outside the church, news media trucks were lined up on a nearby street. TV cameras were crowded onto big-rig flatbed trucks.

Earlier in the day, passers-by, some walking dogs or out for a jog, stopped to reflect on the former first lady's life.

"I don't know where a lot of people would be if it weren't for her," said Randy Gaynor, 47, a recovering alcoholic who stopped to talk to reporters outside the church. "There's been a lot of first ladies and they did a lot of things, but this will be long remembered after she's gone."