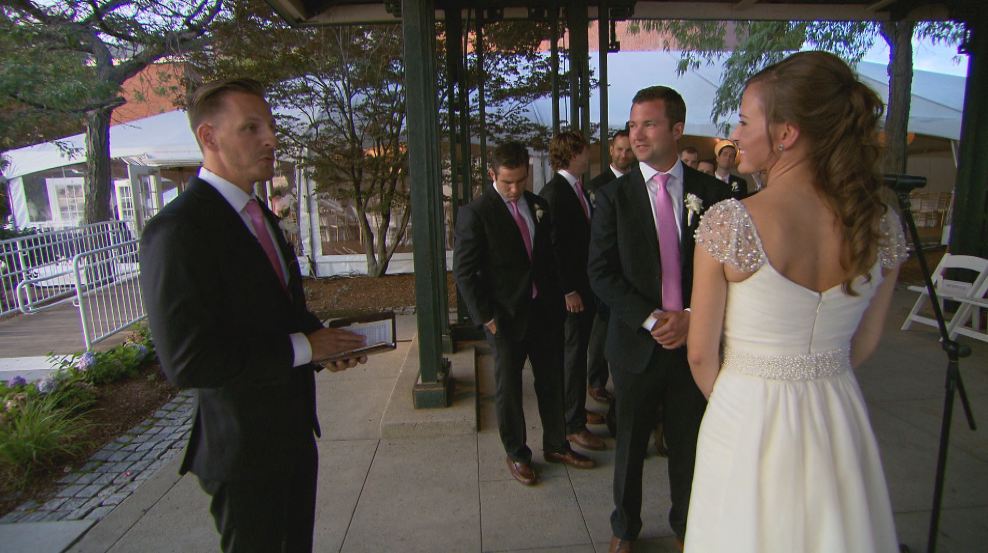 Less than half say religion is very important to them, and just half say they believe in God with absolute certainty, compared with nearly 70 percent of baby boomers.

The drop in religious beliefs is shaking up the way many Americans get married. The amount of Americans choosing to get married by a priest in a Catholic Church is down more than 60 percent since 1970. More and more, Americans are instead asking their friends to step in and do the honors, reports CBS News correspondent Adriana Diaz.

Megan Lantto and Patrick Bigelow included many of the traditional marital trappings on their big day - the white dress, groomsmen in matching ties, excited moms and musical accompaniment as the bride walked down the aisle.

But when it came to choosing a person to oversee their "I Do's," Megan and Patrick - both raised Catholic - broke from tradition. They asked Pat's college friend Matt Ferari to officiate the ceremony, not a Catholic priest.

Megan Lantto and Patrick Bigelow included many of the traditional marital trappings on their big day - the white dress, groomsmen in matching ties, excited moms and musical accompaniment as the bride walked down the aisle.

But when it came to choosing a person to oversee their "I Do's," Megan and Patrick - both raised Catholic - broke from tradition. They asked Pat's college friend Matt Ferari to officiate the ceremony, not a Catholic priest.

"Having a minister or a priest up there who doesn't know us would have seemed fake," said Bigelow. "I think Megan was probably a little nervous at first knowing Matt, um, but he's done a great job."

The majority of amateur officiants receive certification from websites like the Universal Life Church, a non-denominational online ministry. In 2014, the church ordained 250,000 people, and expects a 30-percent increase this year. The site says ordination is "fast, free and easy" with "no experience necessary."

"I for one happen to think that experience is pretty necessary to stand with a wedding couple to make sure that they are getting off on the right foot," said Steven Stark Lowenstein, who studied for five years to become a rabbi. He says clergy are specially trained to support couples through pre- and post- marital counseling. But in the digital age, he says spouses can overlook that traditional support.

"The world is changing so rapidly that religion is kind of being relegated to a back seat," Lowenstein said. "I don't believe that it has to be that way, but so many of the millennials don't event want to give us a chance."

Thirty-five percent of millennials - Americans between 19 and 34 - identify as nonreligious. That's compared to 17 percent of baby boomers and just 11 percent of those over 70. Lowenstein believes less religion will have an impact.

"I think people will grow up and they won't feel a connection to anything. And to me, the thousands of years of history of the Jewish religion give us the tools that we need to combat any challenge that we face today," he said.

Bigelow and Lantto are part of the 18 percent of Americans raised within a faith, who've given it up.

"I think part of my transition away from religion started when I became a little more political and I realized that I didn't really agree with the politics of my church and all that and I needed to make a decision for myself," Lantto said.

"I was raised Catholic, my mom probably rolling her eyes as she's watching this right now, but you know I just went my own way. We were a generation that kind of chooses their own path," Bigelow said.

As for their friend Matt Ferari, he believes he was able to bring something special to his friends' wedding that a religious figure could not.

"I think I can connect the dots between Patrick and Megan and how they've evolved as a relationship," Ferari said. "Which I think makes it more of a personal ceremony.

The Pew study did have some good news for believers. Although fewer Americans affiliate with a religion, those who do do so with conviction -- two-thirds of adults who identify with a religion say they pray every day.