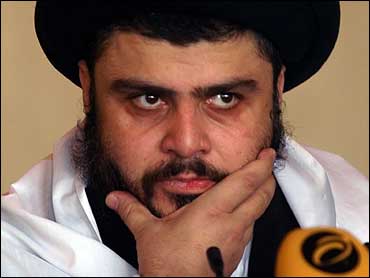 The leader of Iraq's biggest Shiite militia has quietly resumed seminary studies toward attaining the title of ayatollah - a goal that could make firebrand cleric Muqtada al-Sadr and his Mahdi Army an even more formidable power broker in Iraq.

The endgame among Iraq's majority Shiites also means long-term influence over Iraqi political and financial affairs as the Pentagon and its allies look to scale down their military presence in the coming year.

Al-Sadr's backers remain key players in the showdowns across the region, where fears of even more bloodshed are rising following Wednesday's triple car bombing in one of the area's main urban hubs. At least 25 people were killed and scores wounded.

Al-Sadr - who was last seen publicly in May - is confronting the most serious challenges to his influence, which includes sway over a bloc in parliament and a militia force that numbers as many as 60,000 by some estimates.

Becoming an ayatollah - a revered status among Shiite Muslims - would give the 33-year-old al-Sadr an important new voice and aura.

It also would give him fresh clout to challenge his top rival, the Supreme Islamic Iraqi Council, which looks to Iranian-born Grand Ayatollah Ali al-Sistani as its highest religious authority and has its own armed wing, the Badr Brigade, which have been largely absorbed into Iraqi security forces.

Al-Sadr often stresses his Iraqi and Arab roots and rejects suggestions that he is beholden to Persian Iran, the world's Shiite heavyweight and the benefactor of many Shiite politicians.

As an ayatollah, his views and fatwas, or religious edicts, would resonate with even more authority as the battles heat up for sway over Iraq's Shiite heartland.

"If ... Muqtada becomes a religious authority, the entire movement will grow stronger," said one of the aides who described al-Sadr's seminary studies to the AP.

The al-Sadr associates - three in all - spoke on condition of anonymity because they are not authorized to share the information with the media. Their accounts, made in separate interviews, were in broad agreement.

Muqtada Al-Sadr currently has the relatively low title of hojat al-Islam, which leaves his supporters no choice but to seek religious guidance from top establishment clerics - many of whom al-Sadr sees as out of touch with common Iraqis and accuses of acquiescing to Washington's demands.

The aides said al-Sadr was currently on a path to achieve ayatollah rank possibly by 2010 or earlier. His studies were under the supervision of senior clerics in the Shiite holy city of Najaf - where al-Sadr's Mahdi Army fought grinding urban battles with U.S. forces in 2004.

In 2000, al-Sadr enrolled in "outside research" - roughly the equivalent of a doctoral program. Afghan-born Grand Ayatollah Ahmed Issaq al-Fayadh, one of Najaf's four top clerics, supervised him when he joined, but al-Sadr's attendance has been spotty since 2003.

Successful candidates qualify for ayatollah upon completion of the rigorous Islamic studies. But it's also necessary to have a family pedigree in Islamic scholarship and a following among seminary students and laymen.

Al-Sadr should have no problem. His father, Grand Ayatollah Mohammed Sadeq al-Sadr, is the namesake for the teeming Shiite district in Baghdad known as Sadr City - called Saddam City before the 2003 U.S.-led invasion.

Significantly, the aides said, the main focus of al-Sadr's studies has been the Shiite doctrine known in Arabic as "wilayet al-faqeeh," which supports the right of clerical rule. The concept was adopted by Iran's Khomeini, but carries little support among Iraq's Shiite religious hierarchy.

Al-Sadr has not been seen in public since May but is believed to travel frequently between Iran and Najaf. His whereabouts are never revealed by his aides and he rarely gives media interviews.

Al-Sadr also is seeking to give the Mahdi Army a more religious bloodline, the aides said.

Some militiamen are taking seminary lessons for three hours a day, five days a week in private homes and out-of-the-way mosques to escape the detection of the U.S. military.

The aides said only those who pass seminary exams will remain in the militia, which has been splintered by defections from factions favoring closer ties with Iran and opposing an order in August to put down weapons for six months.

The move was seen as an attempt by al-Sadr to reclaim control of the militia and weed out mutineers. It has been credited for a noticeable reduction in violence, but appears to have emboldened the U.S. military to step up a crackdown against Mahdi leaders.

The cleric's absence from the public eye has raised some questions about his control of the movement, although his aides said he has been in regular contact with key lieutenants. His loyalists hold 30 of parliament's 275 seats, the largest share by a single party.

Al-Sadr pulled out his ministers from the Shiite-dominated government in April and later pulled out from the umbrella Shiite alliance in parliament.

Tensions in southern Iraq have risen sharply in recent weeks as the United States and Britain prepare to scale down their presence, leaving behind a potentially dangerous power vacuum.

Next week, Britain plans to hand over control of Basra province, the most important in the south. The Pentagon has diverted much of its attention to battles in central and northern Iraq against Sunni extremists, including al Qaeda in Iraq.

In his latest statement, however, al-Sadr counseled his followers to be patient in the face of "predicament" and commended them on their adherence to his order to stand down. But the aides said al-Sadr's own patience may be running thin and a showdown with the Supreme Islamic Iraqi Council may be imminent.

"If this continues for much longer, the Sadrist movement will strike back," warned one of the aides. "This could have grave consequences for everyone."