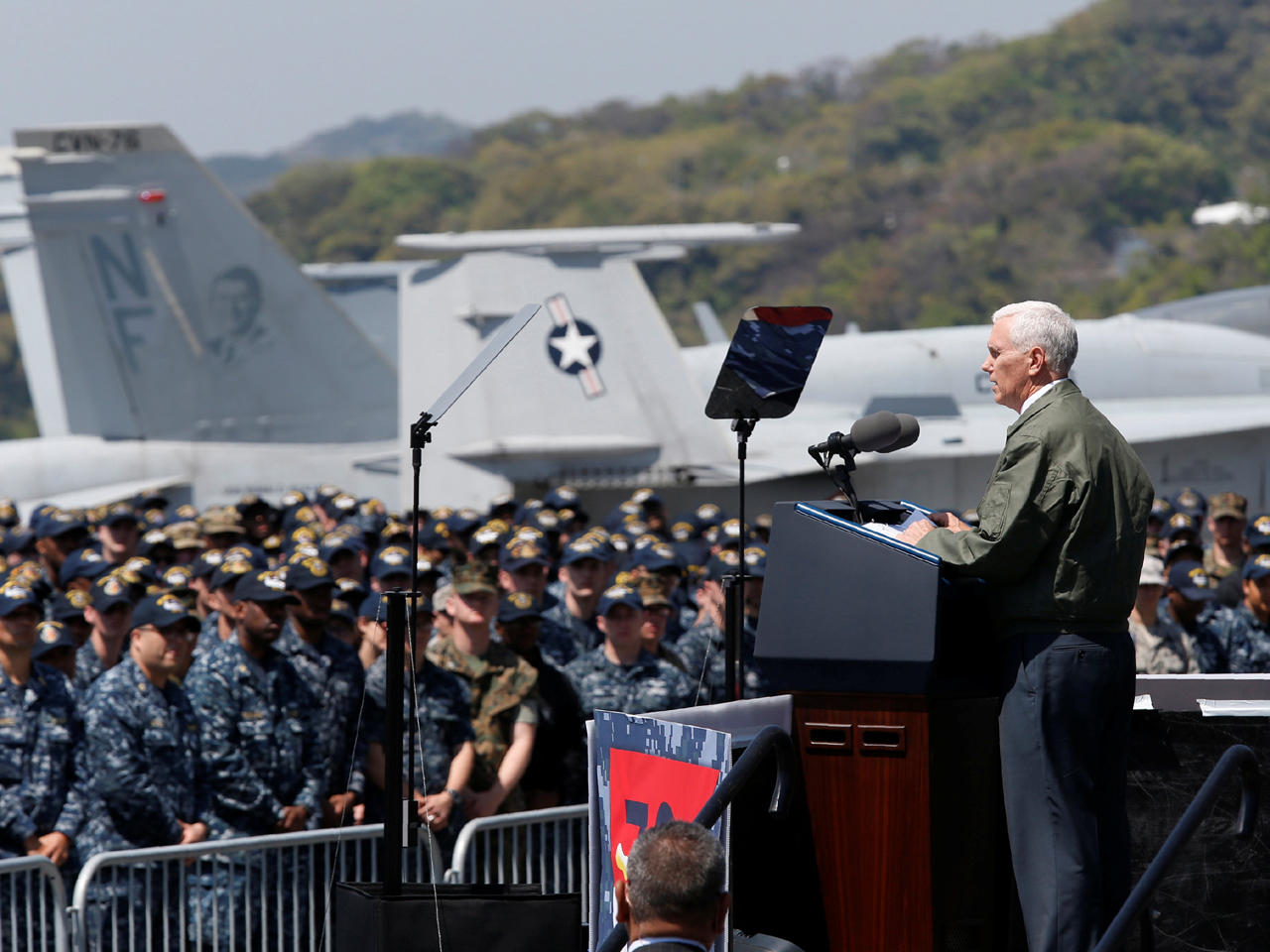 YOKOSUKA, Japan -- From the wind-swept deck of a massive aircraft carrier, Vice President Mike Pence on Wednesday warned North Korea not to test the resolve of the U.S. military, promising it would make an “overwhelming and effective” response to any use of conventional or nuclear weapons.

Pence, dressed in a green military jacket, said aboard the hulking USS Ronald Reagan that President Donald Trump’s administration would continue to “work diligently” with allies like Japan, China and other global powers to apply economic and diplomatic pressure on Pyongyang. But he told the sailors, “as all of you know, readiness is the key.”

“The United States of America will always seek peace but under President Trump, the shield stands guard and the sword stands ready,” Pence told 2,500 sailors wearing blue fatigues and Naval baseball caps on a sunny, windy morning aboard the carrier at the U.S. Yokosuka naval base in Tokyo Bay.

“Those who would challenge our resolve or readiness should know, we will defeat any attack and meet any use of conventional or nuclear weapons with an overwhelming and effective American response,” Pence said.

The vice president said the U.S. would honor its alliance with Pacific Rim nations and protect freedom of navigation in the South China Sea, the sea lanes vital to global shipping where China has been staking claim to disputed territory.

From two continents, Pence and Defense Secretary Jim Mattis warned that North Korea’s latest failed missile launch was a reckless act of provocation and assured allies in Asia that the U.S. was ready to work to achieve a peaceful denuclearization of the Korean Peninsula.

CBS News’ Pamela Falk says U.S. Ambassador to the United Nations Nikki Haley told reporters on Tuesday that, “there is one message to North Korea; the United States is not looking for a fight, so don’t try and give us one.”

Mattis denounced North Korea’s attempted missile launch as he began a Middle East tour, telling reporters traveling with him to Saudi Arabia, “the leader of North Korea again recklessly tried to provoke something by launching a missile,” he said. The term “reckless” is one the North Koreans have used to describe ongoing large-scale U.S. and South Korean military exercises, which the North calls a dress rehearsal for an invasion.

Mattis did not identify the type of missile but said it was not of intercontinental range, meaning it could not reach U.S. territory. He did not comment on what might have caused the missile to fail.

Another official, speaking on condition of anonymity to discuss an intelligence matter, said the missile was a Scud variant that the U.S. calls a KN-17.

Mattis credited China with trying to help get the North Korea situation “under control” with the goal of denuclearizing the peninsula.

Pence’s speech on the aircraft carrier followed meetings Tuesday in Tokyo with Japanese Prime Minister Shinzo Abe, where he noted that “all options are on the table.”

Abe said that it was a “matter of paramount importance for us to seek diplomatic efforts as well peaceable settlements of the issue.”

“But at the same time,” the prime minister said, “dialogue for the sake of dialogue is valueless and it is necessary for us to exercise pressure North Korea so that it comes forward and engages in this serious dialogue.”

The Trump administration has signaled a forceful U.S. stance on North Korea’s recent actions, dispatching Pence to the Demilitarized Zone dividing North and South Korea on Monday in a show of American resolve. But it remains unclear what might come next.

Behind the heated rhetoric, Mr. Trump’s strategy in the region looks somewhat similar to predecessor Barack Obama’s -- albeit with the added unpredictability of a new president who has shown he’s willing to use force.

Pence said Mr. Trump was hopeful China would use its influence in the region to pressure the North to abandon its weapons program. But the vice president expressed impatience with the unwillingness of North Korea to move toward ridding itself of nuclear weapons and ballistic missiles.

“China expresses serious concern with recent trends about North Korea’s nuclear and missile development. China is unswerving in its commitment to realising the denuclearisation of the Korean peninsula, maintaining the peace and stability of the Korean peninsula, and continue to solve matters through dialogue and negotiations,” spokesman Lu Kang said, according to Reuters.

In Moscow, Russian Foreign Minister Sergey Lavrov told reporters he hopes “there will be no unilateral actions like those we saw recently in Syria and that the U.S. will follow the line that President Trump repeatedly voiced during the election campaign.”

China made a plea for a return to negotiations. Foreign Ministry spokesman Lu Kang said tensions need to be eased on the Korean Peninsula to bring the escalating dispute to a peaceful resolution. Lu said Beijing wants to resume the multi-party negotiations that ended in stalemate in 2009 and suggested that U.S. plans to deploy a missile defense system in South Korea were damaging its relations with China.