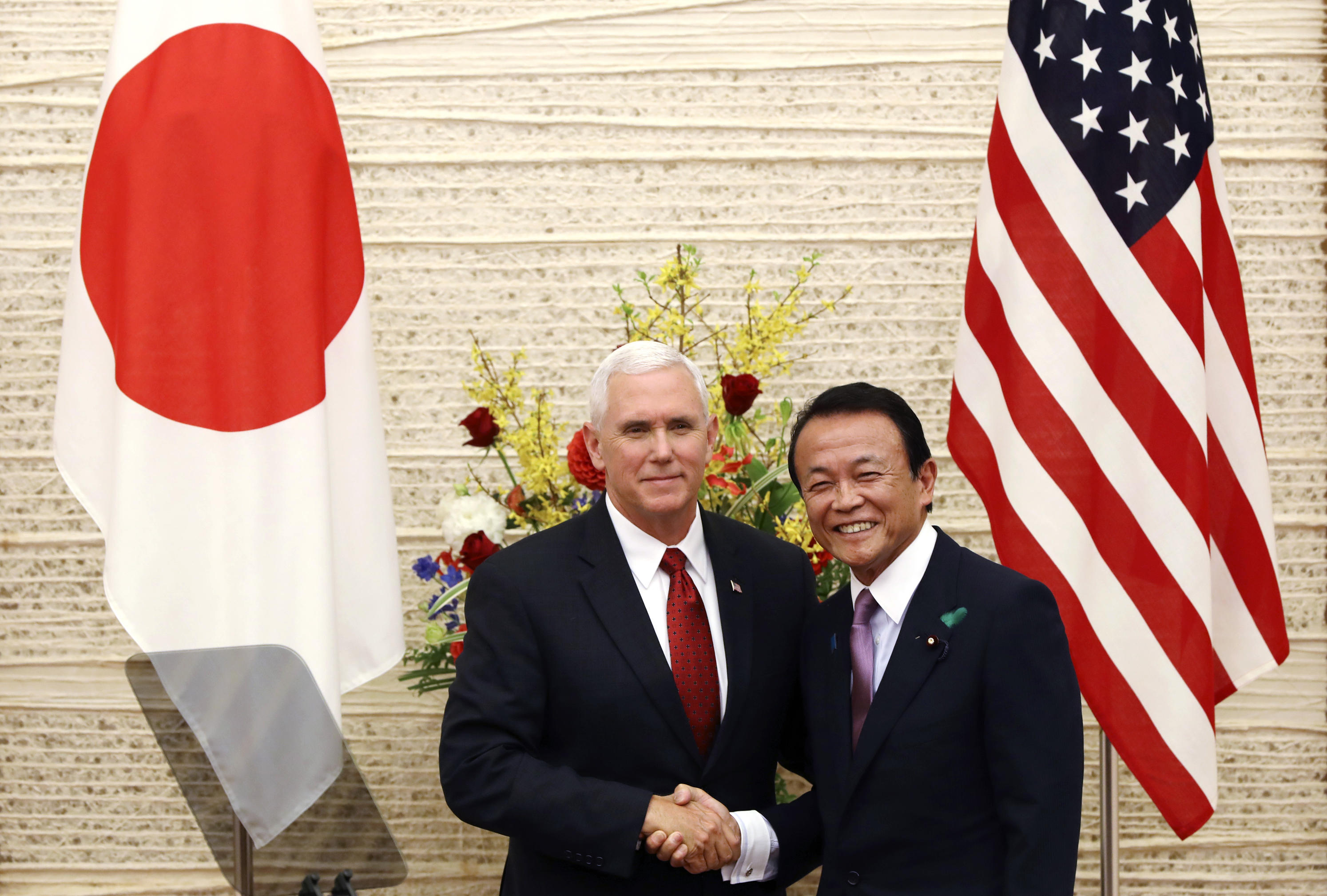 TOKYO -- The U.S. will not relent until it achieves its objective of ensuring the Korean Peninsula is free of nuclear weapons, Vice President Mike Pence said Tuesday while visiting Japan.

After meetings with Prime Minister Shinzo Abe and other leaders, Pence told reporters that President Donald Trump was confident that economic and diplomatic pressure has a chance of compelling North Korea to cooperate.

“It is our belief by bringing together the family of nations with diplomatic and economic pressure we have a chance of achieving a freeze on the Korean Peninsula,” Pence said.

“We will not rest and will not relent until we obtain the objective of a denuclearized Korean Peninsula,” he said.

But as CBS News correspondent Margaret Brennan reports, Mr. Trump has refused to explain his strategy, suggesting he wants to keep the North Koreans guessing, but in an interview on Monday he said all of his predecessors had been outwitted by North Korea’s ruling Kim dynasty.

Pence struck a stern tone after arriving at a U.S. naval base in Japan from South Korea.

“We appreciate the challenging times in which the people of Japan live with increasing provocations from across the Sea of Japan,” he said. “We are with you 100 percent.”

On Monday, Pence traveled to the tense Demilitarized Zone dividing North and South Korea, where he warned North Korea’s leaders that after years of testing the U.S. and South Korea with its nuclear ambitions, “the era of strategic patience is over.”

A senior North Korean official then accused the United States of bringing the countries to the brink of thermonuclear war.

Pence, on a 10-day Asia trip that will also take him to Indonesia and Australia, said Mr. Trump hopes China will use its leverage to get its longtime ally North Korea to give up its nuclear weapons program and ballistic missiles.

U.S. Defense Secretary Jim Mattis said on Tuesday, meanwhile, that North Korea’s latest failed missile launch was a reckless act of provocation intended to “provoke something,” but he also stressed the desire for a political resolution to the crisis.

Mattis commented on the weekend missile launch in an interview with reporters traveling with him Tuesday to Saudi Arabia, where he begins a weeklong Mideast tour. His language was stronger than in an initial written statement he issued shortly after the launch, in which he simply said he was aware of the failure.

“The leader of North Korea again recklessly tried to provoke something by launching a missile,” he said.

Mattis did not identify the type of missile but said it was not of intercontinental range, meaning it could not reach U.S. territory. He did not comment on what might have caused the missile to fail.

Mattis credited China with trying to help get the North Korea situation “under control” with the goal of denuclearizing the Korean Peninsula.

He said the failed missile launch, “shows why we are working so closely right now with the Chinese... to try to get this under control and aim for the denuclearized Korean peninsula.”