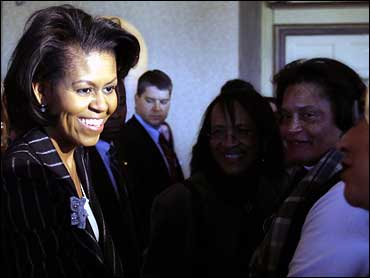 The wife of Democratic presidential contender Barack Obama sought Wednesday to clarify her comment that for the first time she's really proud of her country.

On Monday, Michelle Obama told an audience in Milwaukee that "For the first time in my adult life, I am really proud of my country. Not just because Barack is doing well, but I think people are hungry for change." Cindy McCain, wife of Republican presidential contender John McCain, later sought to capitalize on the remark, saying "I have, and always will be, proud of my country."

Asked by WJAR-TV if she would like to clarify her comment, Obama replied that she has been struck by the number of people going to rallies and watching debates, as well as record voter turnouts.

"What I was clearly talking about was that I'm proud in how Americans are engaging in the political process," she said.

"For the first time in my lifetime, I'm seeing people rolling up their sleeves in a way that I haven't seen and really trying to figure this out - and that's the source of pride that I was talking about," she added.

When asked if she had always been proud of her country, she replied "absolutely" and said she and her husband would not be where they are now if not for the opportunities of America.

Obama himself gave a similar explanation during an interview Tuesday with WOAI radio in San Antonio, Texas. Expressing frustration that his wife's remarks had been taken out of context and turned into political fodder, the Illinois senator said, "What she meant was, this is the first time that she's been proud of the politics of America, because she's pretty cynical about the political process, and with good reason, and she's not alone. But she has seen large numbers of people get involved in the process, and she's encouraged."

Michelle Obama was campaigning in Rhode Island two weeks before the state's March 4 primary. She planned a rally later with her brother, Craig Robinson, the coach of the Brown University men's basketball team.