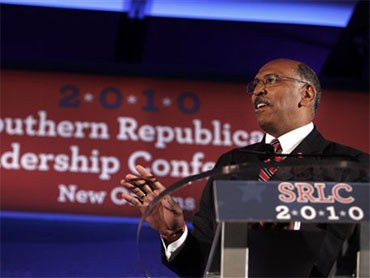 NEW ORLEANS - Republican National Committee chair Michael Steele closed the Southern Republican Leadership Conference here Saturday with a speech meant in part to help stem the criticism directed at him in the wake of a series of scandals that have led to a staff shakeup and calls for his resignation.

"In life, you realize very quickly that you can't please everyone, but you can certainly make them all mad at you at the same time," Steele told a half-empty room of conservative activists, who greeted him with polite but muted applause.

The outspoken Steele did not specifically address his organization's scandals, most recently revelations that the party paid nearly $2,000 for a night out for young donors at a bondage-themed nightclub in West Hollywood. But he referenced the criticisms he has faced, stating that he is "the first to admit I've made mistakes."

Steele said that Democrats and members of the media "are looking for those distractions, and Lord knows I've provided a few."

But he said it was important for the party not to get bogged down in internal criticism.

"They'd love nothing more than for us to keep pointing fingers at me and others" instead of talking about Democratic policies, he said, telling the crowd, "we're not falling for that crap." Steele said it was time for himself and others to "shoulder responsibility and move on."

"Let's tune out all the background noise and go on offense," he said. Added the party chairman: "The one mistake we cannot make is to lose."

Steele spent much of his speech criticizing Democrats for excessive spending and what he called their "health care takeover nonsense." He said Democratic policies had meant there is now an "expiration date on their majority in Congress," suggesting that Republicans would win back the House and Senate in November despite his earlier suggestion that was unlikely to happen.

"Come November, we win, they lose," he said.

"We live in a time when the constitution has lost its sway over those who would govern us," Steele told the Republicans gathered here, criticizing "elite" Washington Democrats for seeing their time in power as an "opportunity for unchallenged social experimentation."

"I tell you how we get our country back, folks: Fire Nancy Pelosi," he said, bringing some in the room to their feet.

Steele mocked President Obama for urging Americans not to accumulate excessive debt despite policies that have deepened the national debt, asking rhetorically what part of that debt Mr. Obama does not think is excessive.

He suggested pro-life Democrat Bart Stupak had been forced not to run for reelection as a result of the fallout from his vote in favor of the health care bill.

"When America says no, you better listen. Just ask Bart Stupak," said Steele. Steele said Stupak had claimed that he is "not the first casualty" of that vote, before adding: "Well, Mr. Stupak, sorry bro, you are."

Steele said Americans are "fed up and ready to throw the bums out in November," telling the crowd he's "never seen the kind of anger that is brewing right now."

On Friday, the chairman of the North Carolina GOP called for Steele to resign. But he also got the backing of the party leaders in a majority of states, who said he "can lead the RNC to be a full partner with us this fall."

His organization's troubles have resulted in some GOP donors opting to donate to other party organizations or straight to individual candidates instead of the RNC.

Jindal Jokes RNC Staffers Should Avoid Bourbon Street
Sarah Palin Fires Back at Obama, Mocks His "Experience" on Nuclear Issues
Is This How Straw Polls are won?
"Evangelicals for Mitt" Step Into Romney Vacuum
Newt Gingrich: We Need a President, Not an Athlete
Liz Cheney: Obama Putting America on Path to Decline
All Hotsheet Coverage of the SRLC