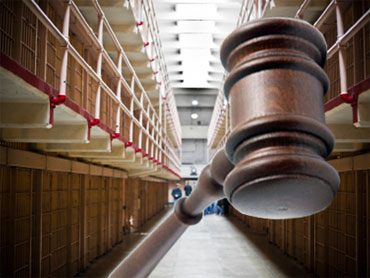 (CBS/AP) CLEVELAND -- A murder defendant freed after spending nearly 25 years on death row in a botched prosecution had a chance to watch an unobstructed sunrise Friday -- and then plan a family reunion.

Michael Keenan, 62, also savored a pizza as his first meal out of prison but looked "weathered, old, white-haired. He needs some sun," his brother, Marty Keenan, said.

Michael Keenan was freed Thursday evening after a judge dismissed the murder charge against him in the 1988 throat-slashing death of a man found dead in a brook in a Cleveland park.

It was the second reversal for a defendant in the case. Joe D'Ambrosio, who was tried separately, was freed in 2010 by a judge who determined prosecutors withheld evidence that could have exonerated him.

A Roman Catholic priest who lobbies against the death penalty, the Rev. Neil Kookoothe, befriended D'Ambrosio and began looking into the case, stumbling on information suggesting another man had a motive.

The case highlighted a win-all tactic by prosecutors of indicting people on serious charges to wrangle a guilty plea from defendants trying to avoid long prison terms, Kookoothe said.

In Keenan's case, Cuyahoga County Common Pleas Judge John Russo said the withheld evidence would have helped Keenan's defense. The harm done by the state's failure to disclose the evidence "cannot be resolved by a new trial," he said.

Keenan, a landscaper, was convicted twice of killing Tony Klann, 19, in a dispute that may have been over missing drugs. His first conviction was overturned after the Ohio Supreme Court determined prosecutorial misconduct, but he was convicted again in 1994, defense attorney John Hildebrand said.

Prosecutors, who have steadfastly defended the handling of the case, said the latest decision would be appealed. Assistant Prosecutor Richard Bell said Keenan could have received a fair retrial.

"We were prepared to prove for the third time that Keenan and his employees murdered Tony Klann," Bell said.

The information various courts have said should have been disclosed to the defense includes a possible murder motive for another man facing a rape case in which Klann was a key witness.

"This evidence could have strengthened Keenan's case by establishing a motive of someone other than Keenan for the murder of Anthony Klann," Russo ruled.

In addition, a third co-defendant who testified against Keenan and D'Ambrosio said Klann was killed in the park, but the first investigators at the scene concluded he had been killed elsewhere.

Edward Espinoza, who pleaded guilty to a reduced charge of manslaughter, was released in 2001 after serving 12 years in prison. He has since died.

Russo said his decision wasn't a judgment on Keenan's guilt or innocence.

"Instead, it is a decision that is founded in the basic right that our forefathers envisioned for those accused of a crime to be afforded a fair trial free from prejudice and misconduct," the judge ruled.

Hildebrand said Keenan is considering suing the state for wrongful imprisonment, as D'Ambrosio has done.

But even money won't make up for lost time and freedom, Keenan's brother said.

"The state can never make things balanced and fair. The state screwed him over," Marty Keenan said. "He hasn't been able to walk outside and enjoy the fresh air all these years."

The freed inmate does not yet have a phone and could not be reached for comment, but Marty Keenan said his brother's first goal is arranging to have his wife come from Colombia. The two were married about six years ago, capping an unlikely romance.

According to Marty Keenan, his sister-in-law had imagined as a child the man she would marry. When she began corresponding with inmates including Keenan, he sent his photo.

"She says, 'This is the guy I was dreaming about as a child'," Marty Keenan said. She traveled to the U.S. to meet Keenan behind bars and be introduced to his family.

Keenan also wants to reconnect with nieces and nephews and meet their children.

The victim's father, Dick Klann, could not be reached for comment Friday. He sat expessionless while the judge ruled Thursday and left before the hearing ended, The Plain Dealer newspaper reported.