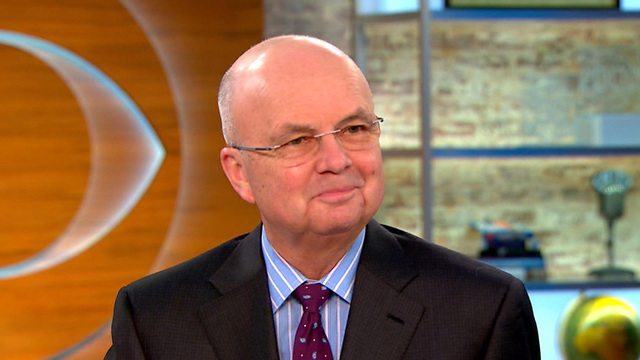 The legal battle between Apple and the FBI over unlocking the phone of one of the San Bernardino killers shows no signs of quieting soon.

In a statement posted on the Lawfare blog Sunday, FBI director James Comey fired back at the tech company Sunday for refusing a federal court order to help the FBI hack into the password-protected iPhone of Syed Farook.

Retired Gen. Michael Hayden, former director of the NSA and CIA, weighed in on the dispute on "CBS This Morning" Monday.

"I think Apple is right in terms of opposing universal backdoors to make it easier for our or any government to get into encrypted communications ... but I am not convinced that what the FBI is asking Apple to do in San Bernardino is that," Hayden said. "And I think the burden of proof is on Apple to show there is an inevitable slippery slope."

Still, Hayden acknowledged the potential threat that "governments who actually wish us no good" could "exploit and take advantage" of the backdoor.

"And my judgment in this particular case is that universal backdoors - although it may facilitate American law enforcement for very good purposes - on balance, on balance, actually are an overall negative for American security, not just for American privacy."

Apple has cooperated with law enforcement to unlock phones in similar cases in the past. But this case requires Apple to create a new software to bypass security protections that are built into its phones because Farook stopped backing up his information over a month prior to the Dec. 2 attack.

"There are other tools available but in this particular case it wasn't backed up to the cloud... And you can't get it to talk to the cloud without getting into it and changing its cloud code," Hayden said.

In his new book, "Playing to the Edge: American Intelligence in the Age of Terror," Hayden opens up about conflicted moral decisions he's made regarding other "gray issues" throughout his career as a powerful intelligence insider. In deciding what information to disclose in the book, Hayden said he received clearance from the CIA, NSA and the director of national intelligence, but was also aware of his "own limits."

"I've been doing this for a while... so I write to what I think the 'edge' is in terms of classification," Hayden said.

One controversial issue he discloses is when he contributed intelligence leading to the decision to carry a drone attack at a WMD expert for Al Qaeda, knowing the target's grandson was nearby.

"When the phone would ring in the middle of the night ... before I would pick it up I would actually say to myself, 'Okay Hayden, listen up. Whatever you're going to decide on this call, you're going to live with the rest of your life,'" Hayden said.

"But when you're director of these kinds of agencies, you still have your personal moral self but you're also acting on behalf of the nation and you have to realize that the failure to make a tough decision, the failure to take that kind of shot could actually lead to something catastrophic."

On the 2016 campaign trail, comments by presidential candidates regarding moral decisions of war have also made headlines.

Sen. Ted Cruz vowed to "carpet bomb" ISIS "into oblivion," while GOP front-runner Donald Trump said he'd "bring back a hell of a lot worse than waterboarding" because "they deserve it."

Hayden rebuked the candidates for turning the "hard, infinitely gray" issues into "bumper stickers" for their campaigns.

"We never did anything to anyone because they deserved it," Hayden asserted. "This was never looking backward. This was trying to keep American safe looking forward. People can argue what we did, but it was never a form of punishment."