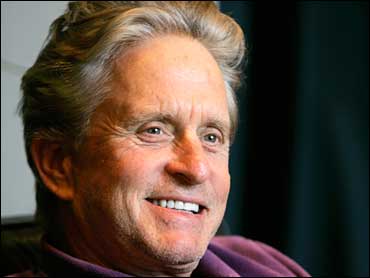 Michael Douglas won an Academy Award as a ruthless man with a nose for stock market gold in "Wall Street." Now he's a lovable kook sniffing after Spanish treasure in "King of California," a shaggy-dog tale that marks his return to independent films.

Douglas still jumps into roles that grab him but finds the urge to work has diminished since his 2000 marriage to Catherine Zeta-Jones, with whom he has a young son and daughter.

"It's funny how your priorities change, and mine definitely have since getting married and starting the family," Douglas, 63, said in an interview at the Toronto International Film Festival, where "King of California" played before its theatrical debut. Now playing in limited release, the film is gradually rolling out nationwide.

2"Basically, for the last eight years, I haven't done a lot," Douglas said. "It takes a lot to drag me out of the house."

Douglas won a best-picture Oscar for producing the 1975 indie sensation "One Flew Over the Cuckoo's Nest."

As an actor, he was a steady hit-maker in the 1980s and '90s in studio hits like "Fatal Attraction" and "Basic Instinct." But lately he has delivered box-office duds. They included the Secret Service thriller "The Sentinel," the action comedy "The In-Laws" and the domestic drama "It Runs in the Family," which co-starred his parents, Kirk and Diana Douglas, and his grown son, Cameron.

Douglas said he generally has outgrown the pressure to keep producing hits, saying the lower-budgeted indie world is a better option for interesting roles than gigantic studio productions that live or die by their opening weekends.

"It is if you've been lucky enough to have the career I've had and have invested wisely," Douglas said. "But I don't feel so good for a lot of people who just are starting out now and what they face. The alternatives aren't good."

In "King of California," Douglas got a chance to do something he's rarely done on screen: Act like a kook. With a bushy beard and a wildly infectious glint in his eye, Douglas plays jazz bass player Charlie, a man with a history of mental problems who has just gotten out of a psychiatric hospital.

He returns to the family homestead, where his wise-beyond-her-years teenage daughter (Evan Rachel Wood) has been paying the bills with her fast-food job. Rather than stepping up to become a responsible dad, Charlie takes his daughter along on a delirious quest to find long-lost loot he's convinced is buried somewhere under the suburban sprawl of California.

Douglas is used to playing earnest characters, but they're generally sober sorts, the kind with a quiet, even menacing edge. Having shown subdued comic flair in "Wonder Boys," "Romancing the Stone," "The Jewel of the Nile" and "War of the Roses," Douglas felt confident taking on the anarchy of Charlie's life.

"I saw the crazies from day one and I was not worried about that, certainly was not worried about playing the mania, based on my history of intensity and all of that," Douglas said. "But I was curious and challenged by where the humor and comedy were going to come from. For someone who's not inherently known as a comedic actor, I love to get a laugh. I'll do just about anything to get a laugh."

3Douglas' antics were so successful, he had the cast and crew doubling over in laughter, co-star Wood said.

"The best actors, I just love watching them switch on and off," Wood said. "Michael's kind of quiet, and they would yell 'Action!' And all of a sudden, he would just be this crazy, kooky, funny character," she said.

"There was a hand-held camera, and the cameraman would be trying not to laugh so hard that the camera would be shaking and we would have to re-shoot everything, because he was just so wild-eyed and with the beard, it was too much for us," Wood said.

"King of California" writer-director Mike Cahill said watching a Douglas double feature of "Wonder Boys" and "Falling Down" convinced him that the actor was right for the role.

In "Wonder Boys," Douglas plays a writer whose novel manuscript and personal life both spin out of control. In "Falling Down," he's a worker bee pushed too far, who snaps and embarks on a personal mission to get payback.

"I went, 'OK, that'll work,'" Cahill said. "On the one hand, he showed the sort of madness, and on the other, he really portrayed disenfranchisement well, someone on the fringes and really not fitting in."

Quietly thoughtful and measured in interviews, Douglas said he falls somewhere between the grave restraint of his earlier hits and the exuberance of "King of California."

"I'd say I'm a pretty good reflection of the two. I'm out of the '60s, so there's a certain stoner mentality and joy and humor that I have from that period," Douglas said. "I'm also a current events freak, so I guess you're sobered up by what's going on in the world today.

"I like to think I'm unpredictable. I think that's what life's about. You don't know what's going to come at you next. I think comedy is much more difficult to do. I've never understood why it's not respected as much, at least in the States, as it is in a country like France. We all know how we cherish our funny friends. We don't have that many, so they're like a valued, endangered species."

Douglas continues to develop scripts, including one about art forgery, one about a basketball coach, and another about an attorney handling lawsuits pegged to SUV rollovers. But he has nothing definite up next.

With Zeta-Jones in her prime, Douglas said she gets to choose roles first, then he fits in his own around her schedule.

He and Zeta-Jones co-starred in the ensemble drama "Traffic," though they did not have any scenes together. Douglas said they might work on another film together, but he's wary of the pitfalls of real-life lovers sharing screen time.

"There seems to be a fear about married couples playing romantic leads together, so we'll maybe come up with something, give her a young, studly leading man and have them fall in love," Douglas said. "And I'll be the villain trying to kill them, maybe."