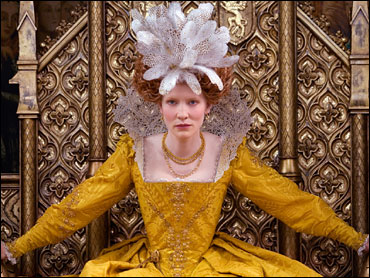 The fall is traditionally the season when so-called "serious" movies fill multiplex screens across the country, replacing the mostly mindless thrill rides that pass for summer blockbusters with thoughtful fare like literary adaptations and issue-oriented films - in other words, Oscar bait.

But the fall has its share of action, comedy and genre fare as well (ever notice the glut of horror films right around Halloween?), ensuring that the season's offerings are not necessarily better than the summer's flicks but certainly more diverse. There are plenty of them as well; without giant tent poles like "Spider-Man 3" taking over whole weekends by themselves, there are many more movies between now and New Year's Eve fighting to attract your interest. Here's a look at what is ahead in the next few months, roughly grouped into seven categories.

The Iraqi occupation and the "war on terror" loom large on the screen this fall. "In The Valley of Elah" (Sept. 14), writer-director Paul Haggis' first film since his Oscar-winning "Crash," stars Tommy Lee Jones as an ex-military man searching for his AWOL Iraq-vet son.

"The Kingdom" (Sept. 28) puts FBI agents Jamie Foxx and Jennifer Garner in the middle of terrorism in Saudi Arabia.

John Cusack has to explain to his two children that their mother just died in Iraq in "Grace Is Gone" (Oct. 5).

Reese Witherspoon tries to find out why her Middle Eastern husband has been abducted by the U.S. government in "Rendition" (Oct. 19).

Director/star Robert Redford stars as a professor who brings the war into his classroom in "Lions for Lambs" (Nov. 9), with Tom Cruise along as a Republican senator.

Cate Blanchett returns to the role that made her an international star in "Elizabeth: The Golden Age" (Oct. 12), which focuses on the British monarch's middle years.

Denzel Washington, meanwhile, gets behind the camera for a 1930s lesson on "The Great Debaters" (also on Christmas).

The Coen brothers' adaptation of Cormac McCarthy's ultra-violent novel "No Country For Old Men" (Nov. 9) was the hit of Cannes and left people stunned by Javier Bardem's personification of the hideously evil hitman Chigurh - this one is a must-see by all accounts.

George Clooney is "Michael Clayton" (Oct. 5), who uncovers a terrible conspiracy at the heart of the law firm he works for and rediscovers his moral center.

"Reservation Road" (Oct. 19) is where the lives of Joaquin Phoenix, Mark Ruffalo, Jennifer Connelly and Mira Sorvino collide after the death of a child.

Dane Cook woos Jessica Alba but is scared of his reputation as the guy girls break up with before meeting the love of their lives in "Good Luck Chuck" (Sept. 21).

Ben Stiller is "The Heartbreak Kid" (Oct. 5) in the Farrelly brothers' raunchy remake of the 1972 comedy.

Clooney is both in front of and behind the camera for "Leatherheads" (Dec. 7), a romantic comedy that sounds like a 1920s pro football version of "Bull Durham."

"The Seeker: The Dark is Rising" (Oct. 5) is one of several attempts to follow "Harry Potter" and "Narnia" with screen versions of other fantastical epics.

New Line has bet $180 million - the farm, in other words - on "The Golden Compass" (Dec. 7), with Kidman and Daniel Craig in the first of author Philip Pullman's dense, allegorical trilogy.

On the sci-fi side of things, Richard Matheson's apocalyptic classic "I Am Legend" gets its third and hopefully most faithful screen treatment (Dec. 14) despite Will Smith in the lead.

Dec. 25 brings a gift for fanboys everywhere in the shape of "Aliens vs. Predator: Requiem."

Of course, October is where the scares are really at: Dark vampire epic "30 Days of Night" (from the best-selling graphic novel) flaps onto screens on the 19, while Oct. 26 brings "Saw IV." Still looking for scares? "Stephen King's The Mist" wafts into theaters on Nov. 21, carrying tentacled monsters with it.

Oscar bait: Are you kidding?