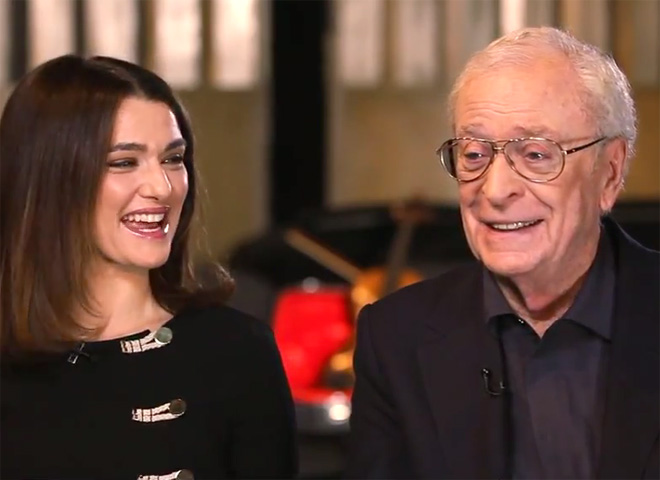 One reviewer calls the film "an emotionally rich contemplation of life's wisdom gained, lost and remembered." It stars Michael Caine and Harvey Keitel as the two friends, along with Jane Fonda and Rachel Weisz.

CBS News correspondent Michelle Miller sat down with the costars in Florence Gould Hall in New York City to discuss their new film and lessons learned over the span of their own careers.

Caine and Weisz had no trouble jumping into their roles as father and daughter without airs, inhibitions or, in the beginning, even clothes.

"We met 3 a.m. in the Swiss Alps. Not a bad place to be. Naked, covered in mud," said Weisz. "What a way to meet Michael Caine right?"

"We were all covered in mud!" said Caine.

"It was health mud," Weisz corrected. "It was good mud. This mud costs a lot of money!"

Even after more than 20 years of acting -- including an Oscar- and Golden Globe-winning performance in "The Constant Gardener" -- Weisz is still surprised by her success.

"I never thought I'd grow up and be in a movie with these icons, really," she said.

"You can never get used to that, people saying you're an icon and all that," Caine added.

"You've become an icon from being yourself -- there's not a false bone in his body," Weisz said about her costar.

Caine said it's "too tiring to be false," and being himself ("lazy") was the "easiest way out."

He grew up Maurice Micklewhite in South London, where gangsters were his friends and family, not just characters on the big screen.

"I used to play the butler, the policeman that came away at the end and took away the villain. And I used to get the tea and run errands for the leading lady," Caine said. "The third rep I was in, I married the leading lady! That was a big errand!"

Caine went from bit parts to movie stardom as the selfish womanizer in "Alfie."

He's won two Oscars -- as a man in love with his wife's sister in "Hannah and Her Sisters," and as an orphanage's doctor in "The Cider House Rules."

He also got a role written specifically for him. Filmmaker Paolo Sorrentino only wanted to make "Youth" if Caine would play the lead.

"I brought it up to him the other day and he thought I was getting very conceited about this, Paolo," Caine said laughing. "So I said, 'It's great that you wrote this for me.' And he said, 'Actually I wrote it for two of you, but the other guy was busy.' And I said, 'who's the other guy?' And he said, 'I'm not telling you.'"

Weisz said "Youth" is about having the "spirit of youth." "And Michael's character, I think, rediscovers his youth at his age. At the age of 82, he suddenly has a bright golden future."

"Usually when people ask me what the film's about I usually say about an hour and fifty minutes, gets me out of trouble," Caine said.

But Caine said one particular scene in the film stuck out -- when he is at the doctor's office, and the doctor asks him, "How do you feel about getting old?"

"I say, 'I don't understand how I got here,' which is true. Because I'm 82 and I sometimes think, why is it I'm 82 and just six years ago I was 38?" Caine said. "Reporters ask me, 'How do you feel about growing gold?' And I say, 'Considering the alternative, great!'"

Caine said he also gets asked about his retirement, but says it's not possible to retire from movies. "Movies retire you," Caine said. "If you're very unlucky, after your first movie you might be retired."

Caine said he currently is not working on a movie, so he is retired "at the moment," but we'll see how long that lasts.