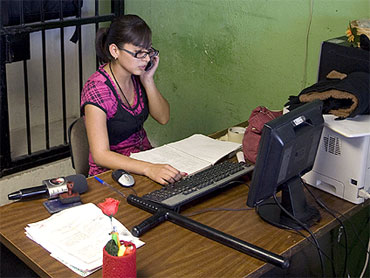 She's been called the bravest woman in Mexico after taking a job no macho man wanted. Marisol Valles, a 20-year-old mother and student, is the new top cop in Praxedis, a small town situated along a key drug smuggling route just across the border from Texas.

Her predecessor was kidnapped more than a year ago. His head was deposited outside the police station a few days after he disappeared. After that, no one came forward to fill the police chief vacancy for more than a year -- until Valles put her name down for the position.

The town's former mayor was killed in June, but the spiraling violence in the state of Chihuahua -- Mexico's deadliest -- didn't deter the young criminology student and mother to a baby boy. She says she took the job because she wants a better future for her son.

"I took the risk because I want my son to live in a different community to the one we have today. I want people to be able to go out without fear, as it was before," Valles said during her swearing in ceremony on Wednesday.

"My people are out there going door to door, looking for criminals, and (in homes) where there are none, trying to teach values to the families," she told the Associated Press before the ceremony.

Praxedis is about an hour drive from Juarez, better known these days as "the murder capital of the world" thanks to its high murder rate. The Juarez valley, where Praxedis is located, has had a total of 2,500 drug violence-related deaths this year.

With a population of just 10,000, the town had eight murders last week alone.

It was once a peaceful town. Now, those who are able flee to other areas to escape the violence between the Sinaloa and Juarez cartels, as they battle for control of the lucrative smuggling routes into the U.S.

Valles will have a total of 19 police officers under her command, at least half of whom are women. She plans to hire more women and says she will focus on reviving family values, public spaces and a better work ethic.

"I'm not going after the 'malos' (bad ones); that's the federal police and soldiers' responsibility," she said. "We're going after the good ones, like children, parents, men and women who we have to organize so they don't fall prey to the temptation of crime, drugs and easy money."

This "easy money" is the biggest problem facing Mexico today, often corrupting underpaid police who will moonlight for drug traffickers.

President Felipe Calderon is pushing for an overhaul of the national police force in an attempt to root out corruption. His plan is to bring as many as 2,500 municipalities like Praxedis under the control of state governments, which are thought to be less corrupt.

Mexico's drug violence has claimed almost 29,000 lives since President Calderon took office in late 2006 and sent about 45,000 soldiers to fight the powerful drug cartels. But the cartels' activities now extend beyond drug smuggling to include human trafficking, kidnapping, extortion and piracy.

"Young people need to engage with their communities," said Valles. "I don't have experience, but experience builds up on the job."

This story was filed by CBS News producer Susana Seijas in Mexico City.