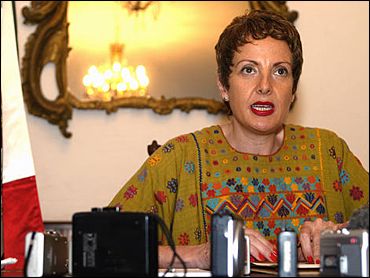 The Mexican government, accusing Cuba of meddling in its internal affairs, gave the ambassador of the communist-run island his walking papers and said it will call its own ambassador home immediately.

Cuban officials had no immediate reaction, but the Mexican government's decision underscored the extent to which bilateral relations have deteriorated since President Vicente Fox took office in 2000.

"We want to make clear that Mexico does not and will not tolerate, under any premise or circumstances, the attempt of any foreign government to influence our domestic or foreign policy decisions," Derbez said.

Cuba embarrassed and infuriated Fox in 2002 by releasing a clandestine tape recording of the Mexican leader trying to persuade Castro to leave a summit meeting before the arrival of President Bush.

One source of contention has been Mexico's vote in the past several years in favor of a resolution criticizing Cuba's human rights record at the U.N. Human Rights Commission in Geneva.

President Fidel Castro severely criticized that stance in his May Day speech Saturday, saying that the prestige Mexico once gained in Latin America and throughout the world for its foreign policies had "turned to ashes" as it began toeing the line for the United States.

Derbez indicated that Castro's remarks were unacceptable. Creel, meanwhile, said one of the reasons Fox decided to scale back diplomatic relations was because Cuban Communist Party members entered the country on diplomatic passports last month without advising Mexican officials.

With the assistance of the Cuban Embassy's political affairs adviser, Orlando Silva, the Cubans were "handling issues … that should be dealt with through diplomatic channels," Creel said, adding that he would not publicly release the details.

Derbez said Silva had been declared a "persona non grata" and was to leave Mexico immediately — and permanently.

The diplomatic breakdown also came as the result of recent remarks Cuban officials made regarding an ongoing political scandal in Mexico, Derbez said.

Ahumada admitted to making the videotapes, saying that officials were trying to extort him. Mexico City Mayor Andres Manuel Lopez Obrador claimed the federal government was behind the tapes in an effort to tarnish his image. Lopez Obrador is seen as an early leading presidential contender in 2006. The government denied the charges.

Cuban Foreign Minister Perez Roque claimed Ahumada told Cuban officials the videos were "deliberately calculated to achieve political objectives and planned with months of anticipation." He said Cuba was deporting Ahumada because it did not want to be involved in the scandal. Mexico's Foreign Relations Department immediately took exception to the remarks.

Derbez said Mexico "does not intend or desire to alter its friendly relations with a nation that has historically been its brother."

"But let it be clear that the magnitude of what President Castro has said and the actions of his functionaries in Mexico cannot and should not be overlooked."

Mexico is the only country in Latin America that never broke ties with Cuba. For decades, it used those ties to mollify Mexican leftists upset by Mexico's close relationship with the United States.

The United States, which lists Cuba as a "state sponsor of terrorism," has long accused the Castro regime of interfering in the affairs of other Latin American states, most recently Colombia, where two leftist armies are locked in a long war against the government.