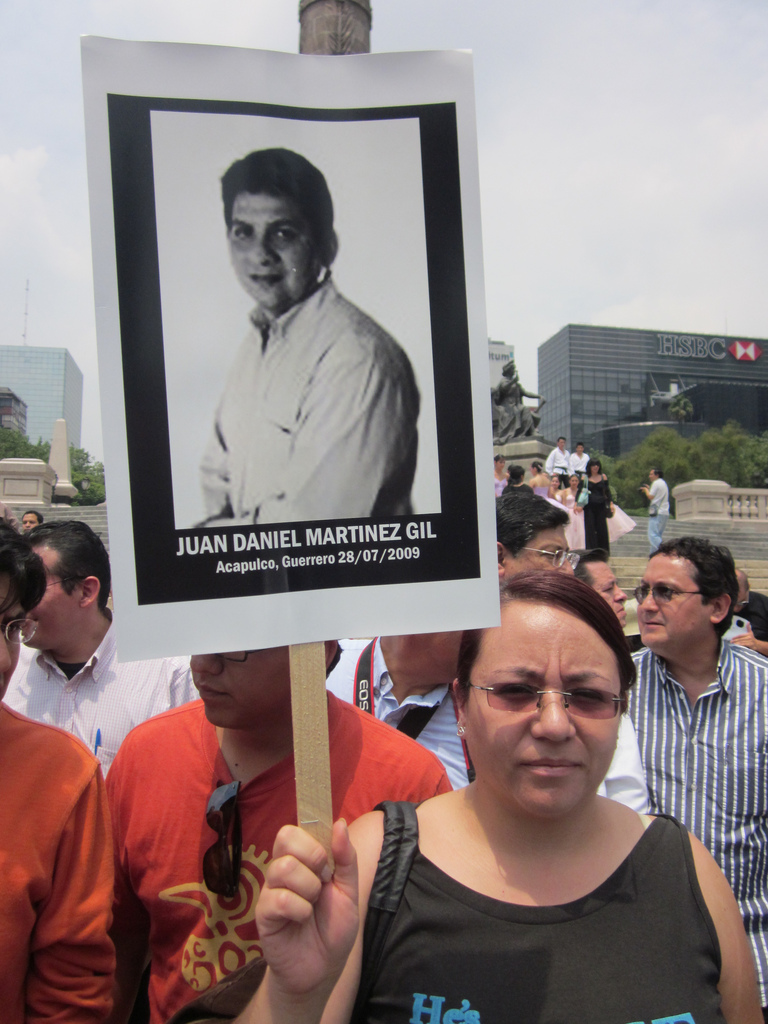 Hundreds of journalists marched in downtown Mexico City and thousands joined in other marches across the country Saturday in protest of the escalating intimidation, kidnapping and murder of fellow journalists by organized crime.

"Los queremos vivos," or "we want them alive," read banners carried by journalists who marched from Mexico City's Angel of Independence down Reforma Avenue towards the Ministry of the Interior, demanding justice and protection for journalists.

Journalism in Mexico has been a life-threatening profession for some years now. A total of 67 journalists have been killed here since 2000, according to Reporters Without Borders, making Mexico one of the most dangerous countries to be a journalist.

As drug-related violence in Mexico has intensified, claiming some 28,000 lives since President Felipe Calderon took office on Dec 1, 2006 and declared war on Mexico's ruthless drug cartels, reporters have increasingly become the targets of organized crime.

"This is the first march organized by journalists calling for the protection of journalists," said Marcela Turati, who heads Journalists on Foot, an organization that assists reporters threatened by organized crime. "It's an important first step that so many of us have come out today protesting the insecurity suffered by journalists, some of the most vulnerable members of Mexican society today. But we need more follow-up, more mechanisms to protect journalists," added Turati.

"We've reached a critical extreme," said investigative reporter Victor Ronquillo during Saturday's march. "The kidnapping of four journalists last month was the last straw. Our colleagues were just covering a breaking news event, not doing any muckraking investigative work, which shows you the level of total impunity and danger we've reached."

In today's Mexico, just being a reporter, photographer or cameraman increasingly means putting your life on the line. William Booth of The Washington Post recently reported that intimidation from drug cartels is such that a five hour-long gun battle in Nuevo Laredo resulted in a media blackout - with journalists too scared to report on a confrontation between soldiers and drug traffickers which killed up to 12 people, including innocent bystanders.

The turning point in the debate over journalists' safety, however, came when four journalists, including three from major TV networks, were abducted by drug traffickers on July 26 while covering the Gomez Palacio prison in Durango state, where prison wardens allegedly armed and let out inmates on a night-time killing spree that ended in the massacre of 17 partygoers in nearby Torreon, Coahuila state on July 18.

In a rare outcome for the kidnapping victims, two of the reporters were rescued days later, on August 1, by Mexico's federal forces. (The other two journalists had been released earlier on in the week.)

"What this march shows is total solidarity with reporters in the most dangerous parts of Mexico - mostly in the north of the country," said Manuel Clouthier, a federal congressman who is part of a committee that monitors attacks on the media at Congress and one of the few politicians present at the march.

"In the past, before the four journalists were abducted, we had a total disconnect between what happened to journalists in other states. It's as if attacks on the media were happening in another country," Clouthier said. "We have to applaud that Mexico City and journalists here are in complete solidarity with colleagues in places like Durango and Juarez."

"Attacks on the media are now part of the national debate," said Carlos Zuniga, a news anchor at Milenio TV who took to the airwaves denouncing his colleagues' abduction. Javier Canales, a cameraman for Milenio in Torreon was one of the four journalists kidnapped last month.

"Let's hope something good comes of this march, we all need to get more involved - we need to further the dialogue of journalism safety among media owners and the government," Zuniga added.

Georgina Olson, a Mexico City-based reporter for Excelsior newspaper, said the march was creating awareness and strengthening ties among reporters.

"If we don't come out and protest, the narcos are going to end up terrorizing us all," said Olson.

"For Mexico City and foreign journalists covering the drug war we have the luxury of being able to parachute in and out of places like Juarez, but for our colleagues who live and work there, there is no reprieve, no time out from the violence," said Ronquillo as journalists put up protest banners on the gates of the Ministry of the Interior. "What's worse, not even the Mexican government can guarantee our safety."