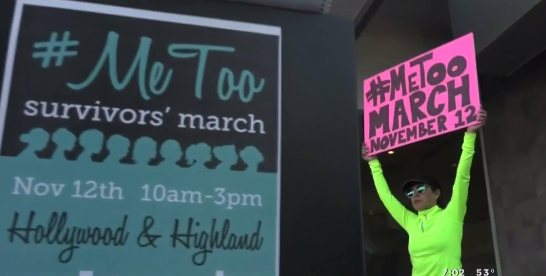 HOLLYWOOD -- Along the famous Hollywood Walk of Fame, hundreds met to take the #MeToo movement from social media to the star-lined streets on Sunday.

The demonstration was scheduled to begin at 10 a.m. at Hollywood Boulevard and Highland Avenue with a march to the CNN Building on Sunset Boulevard, where a press conference was expected to be held at noon local time, CBS Los Angeles reports.

A flood of accusations against Hollywood heavy hitters like Harvey Weinstein, Kevin Spacey and Louis C.K. acted as a catalyst for more people to come forward.

March organizer Brenda Gutierrez, a sexual assault survivor herself, was motivated to help the victims.

"I'm definitely hoping that people leave here and be like, 'ok i'm not alone, I have, there's like all these other people that I can reach out to now," Gutierrez told CBS News correspondent Mireya Villarreal.

"Me Too" is a grassroots project that started in New York more than a decade ago. Founder Tarana Burke is a victim of multiple sexual assaults.

"This day is kind of emotional. I never imagined a time where people would stand together in the street and say out loud that we survived this thing and we stand together. It feels really special, and really important, and the start of something new. A new way for us to do this work," Burke told Villarreal.