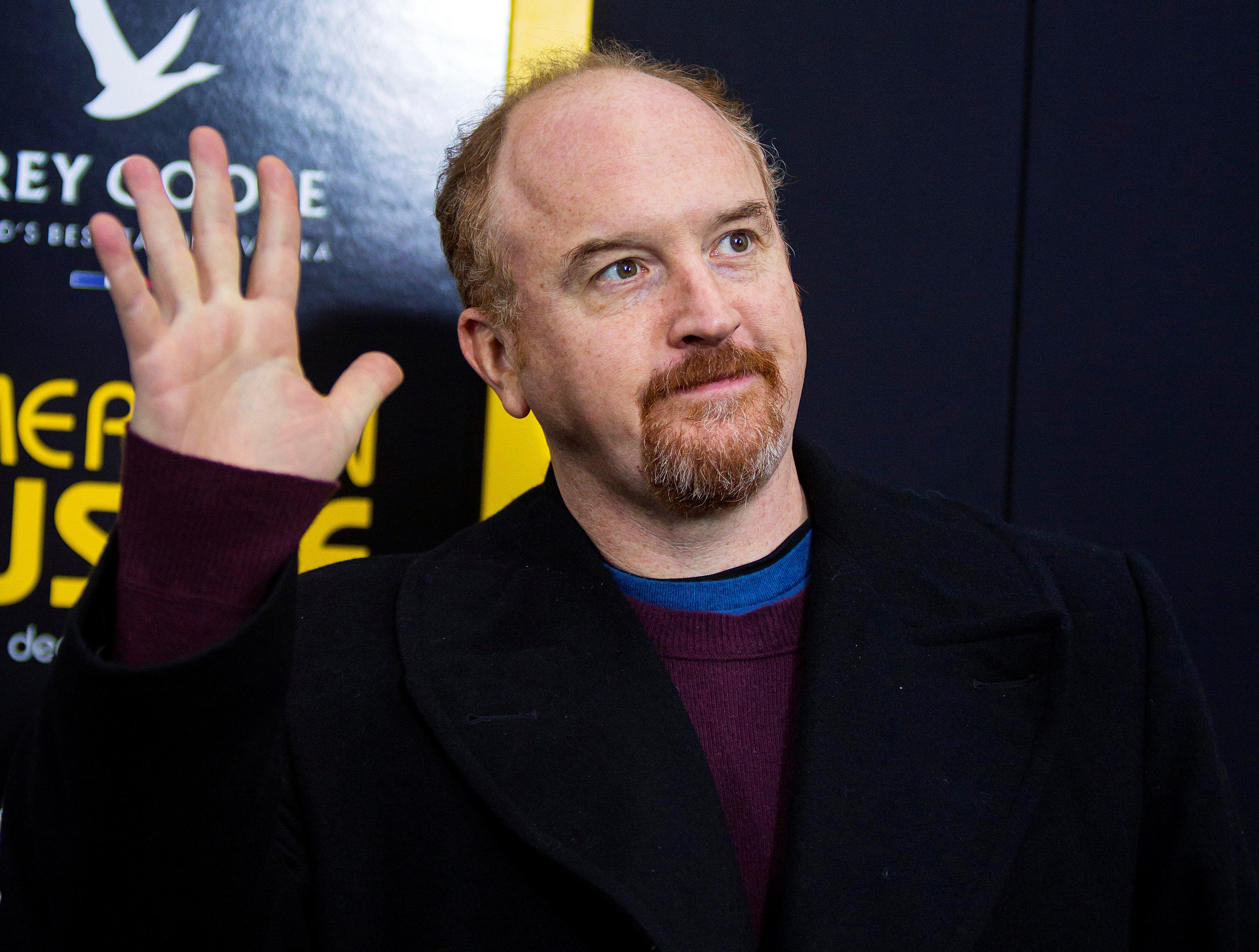 The comedian said in a statement that the harassment claims by five women detailed in a New York Times report published Thursday "are true."

CBS News contributor Jodi Kantor, who co-authored the Times report, said the women who came forward were in "complete shock" when the incidents happened.

"Louis C.K. is now one of the biggest names in comedy," Kantor said on "CBS This Morning" Friday. "And so they felt like they weren't really sure if they could speak out or say anything."

In his statement, C.K. apologized to the cast and crew of several projects he's been working on, his family, children and friends, his manager and the FX network, among others.

Hours later, FX canceled its deal with C.K.'s production company, saying in a statement that he would no longer be executive producer or receive compensation on any of the four shows the network was producing with him.

Pamela Adlon, C.K.'s longtime creative partner, said in a statement that she and her family are "devastated and in shock after the admission of abhorrent behavior by my friend and partner, Louis C.K.  I feel deep sorrow and empathy for the women who have come forward. I am asking for privacy at this time for myself and my family. I am processing and grieving and hope to say more as soon as I am able."

Additionally, CBS News confirmed late Friday that Universal Pictures and Illumination have terminated their relationship with Louis C.K. on the upcoming project "The Secret Life of Pets 2."  Netflix said Friday it will not produce a second planned stand-up special starring the comedian, citing his "unprofessional and inappropriate behavior." He had been tapped for two specials, with the first airing in April. At least five of the comedian's stand-up specials remain on Netflix.

C.K.'s 438-word statement (scroll down to read it in its entirety) ends with the comedian vowing to stop talking and leave the spotlight, stating "I will now step back and take a long time to listen."

The comedian stepped forward on the same day the indie distributor The Orchard said it will scrap the release of C.K.'s film "I Love You, Daddy." C.K. has already been edited out of the upcoming HBO benefit "Night of Too Many Stars" and his work is being scrubbed from the cable network's vaults.

CBS News legal analyst Rikki Klieman said on CBSN that C.K. was making his case in the court of public opinion.

"Louis C.K., his attorneys, his managers, his PR people or anyone else who may have been involved with him since the story broke decided to make a statement with the hope that they could really mitigate the ultimate damages, which is personal and professional fallout," Klieman said.

C.K. is the latest high-profile man caught in a flood of accusations that began after an October report in the New York Times alleging that Hollywood mogul Harvey Weinstein had sexually harassed or assaulted several women. Others who face sexual harassment or assault accusations include "House of Cards" star Kevin Spacey and filmmaker Brett Ratner.

The widening allegations have also reached former "Gossip Girl" actor Ed Westwick. The BBC scrapped a TV series in the wake of rape allegations against Westwick. The broadcaster also paused filming on the 1980s-set sitcom "White Gold," which stars Westwick. He has been accused of raping two women, charges he denies. On Instagram, he called the allegations "unverified and provably untrue."

"ER" actor Anthony Edwards revealed that he was molested when he was 12 by director and producer Gary Goddard. In a post Friday on Medium, Edwards said he's been in therapy for years over the assault and confronted Goddard over it 22 years ago at an airport. Goddard, he said, "swore to his remorse." Attorney Alan Grodin, a lawyer for Goddard, said Goddard has been out of the country and "will have a response shortly."

Actor Jeremy Piven also took to social media to once again declare his innocence of sexual misconduct, saying on Twitter he hopes the string of sexual harassment allegations will lead to "a constructive dialogue on these issues" but warned about "false accusations."

"We seem to be entering dark times - allegations are being printed as facts and lives are being put in jeopardy without a hearing, due process or evidence. I hope we can give people the benefit of the doubt before we rush to judgment," he wrote.

Piven, who has been accused by two women of sexual misconduct, faces a fresh accusation made against him from an advertising executive. Tiffany Bacon Scourby told People magazine that Piven held her down while he performed a sex act at a hotel 14 years ago.

The crisis has led to Los Angeles District Attorney's office to announce a special task force is being created to deal with the widespread allegations of sexual abuse in the entertainment industry.

"It's important that as allegations come in from around the county, as they do, they have centralized stop," former LA sex crimes prosecutor Steve Meister told CBS News' Carter Evans.

The crisis has also roiled the world of journalism, with editors at The New Republic and NPR losing their jobs. The latest accusation involved Rolling Stone: Ben Ryan, a freelance writer, accused the magazine's publisher, Jann Wenner, of sexual harassment, saying Wenner offered a writing contract if Ryan spent the night at the publisher's Manhattan townhouse. Wenner acknowledges he did attempt to have a sexual liaison but denied offering a writing contract for sex.

In other developments, Jenny McCarthy also reiterated an allegation she made against actor Steven Seagal, saying she fled from a 1995 audition with Seagal after he repeatedly asked her to take off her clothes for a part that didn't require nudity.

McCarthy recounted her encounter with Seagal during a tryout for "Under Siege 2" on her Sirius XM radio show Thursday, a day after actress Portia de Rossi accused Seagal of unzipping his pants during an audition.

McCarthy said Seagal was the only person in the room when she showed up to read for her part, she said. After declining his invitation to sit next to him on a couch, McCarthy, who said she purposefully wore a loose-fitting garment to the audition so the focus would be on her acting instead of her body, said Seagal asked her to remove her clothes. When McCarthy countered that she was told the part didn't require her to be naked, she said Seagal told her that it involved "off-camera nudity."

"I know you must have a beautiful body underneath there. Can you lower it so I can see your breasts," she recalled Seagal saying.

A representative for Seagal didn't immediately return a request for comment Friday, but a Seagal spokesman has denied McCarthy's accusations to The Daily Beast. McCarthy told the same story to Movieline in 1998.

The following statement from Louis C.K. is unedited except for explicit language:

I want to address the stories told to the New York Times by five women named Abby, Rebecca, Dana, Julia who felt able to name themselves and one who did not.

These stories are true. At the time, I said to myself that what I did was okay because I never showed a woman my d*** without asking first, which is also true. But what I learned later in life, too late, is that when you have power over another person, asking them to look at your d*** isn't a question. It's a predicament for them. The power I had over these women is that they admired me. And I wielded that power irresponsibly.

I have been remorseful of my actions. And I've tried to learn from them. And run from them. Now I'm aware of the extent of the impact of my actions. I learned yesterday the extent to which I left these women who admired me feeling badly about themselves and cautious around other men who would never have put them in that position.

I also took advantage of the fact that I was widely admired in my and their community, which disabled them from sharing their story and brought hardship to them when they tried because people who look up to me didn't want to hear it. I didn't think that I was doing any of that because my position allowed me not to think about it.

There is nothing about this that I forgive myself for. And I have to reconcile it with who I am. Which is nothing compared to the task I left them with.

I wish I had reacted to their admiration of me by being a good example to them as a man and given them some guidance as a comedian, including because I admired their work.

The hardest regret to live with is what you've done to hurt someone else. And I can hardly wrap my head around the scope of hurt I brought on them. I'd be remiss to exclude the hurt that I've brought on people who I work with and have worked with who's professional and personal lives have been impacted by all of this, including projects currently in production: the cast and crew of Better Things, Baskets, The Cops, One Mississippi, and I Love You Daddy. I deeply regret that this has brought negative attention to my manager Dave Becky who only tried to mediate a situation that I caused. I've brought anguish and hardship to the people at FX who have given me so much The Orchard who took a chance on my movie. and every other entity that has bet on me through the years.

I've brought pain to my family, my friends, my children and their mother.

I have spent my long and lucky career talking and saying anything I want. I will now step back and take a long time to listen.

Thank you for reading.