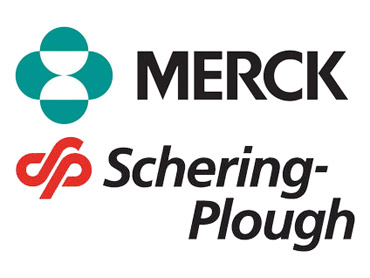 Merck spokeswoman Amy Rose said 99.6 percent of the votes cast, or about 1.4 billion shares, supported the $41.1 billion acquisition of Schering-Plough. The vote came at a special shareholders meeting near Merck's headquarters in Whitehouse Station, New Jersey.

The deal allows Merck, the world's eighth-biggest drugmaker by prescription medicine sales, to leapfrog to No. 2 worldwide, just behind Pfizer Inc. The new Merck would have about $42.4 billion in annual sales.

Shareholders of Schering-Plough will vote on the merger this afternoon at a special meeting in Boston.

The two companies still need approval from the Federal Trade Commission and regulators in other countries. They plan to close the deal in the fourth quarter.

Shares of both companies jumped Friday morning after news of the Merck vote results, with Merck shares up 55 cents at $29.88 and Schering-Plough shares up 41 cents at $26.46.

Buying Schering-Plough also boosts Merck's sagging pipeline of drugs in development, gives it a sizable biotech unit and creates a dominant player in vaccines as well as cholesterol, respiratory and women's drugs. And it allows the new company to slash costs — including roughly 15,000 jobs — to maintain profits as the industry deals with increasing generic competition and the unknown impact of health care reform.

The deal is structured as a reverse merger, meaning Kenilworth, New Jersey-based Schering-Plough is technically the surviving company but will operate under Merck's better-known name.

That's an attempt to hold onto $2 billion a year in revenue Schering-Plough gets under its partnership with Johnson & Johnson to sell lucrative biotech drugs for rheumatoid arthritis and other immune disorders. J&J argues a change-of-control provision in its contract with Schering-Plough allows it to take all revenue from the drugs — Remicade and newly approved successor Simponi — and has started arbitration proceedings to press its suit.

Merck has removed what looked to be the only other significant hurdle to closing the deal, announcing plans last Thursday to sell its half-interest in the Merial animal health business to partner Sanofi-Aventis SA for $4 billion. That addressed antitrust concerns the U.S. Federal Trade Commission raised because Schering-Plough has its own large business selling medicines and vaccines for pets and livestock.

Merck still needs official clearance from the FTC and regulators in the European Union, Switzerland, Canada and China.

Rival Pfizer won't have to worry about the new Merck overtaking it as the undisputed industry leader soon after the merger. New York-based Pfizer is ensuring its dominance with a $68 billion deal to acquire Wyeth later this year.

In the year's third big pharmaceutical acquisition, Switzerland's Roche Group bought the part of California-based biotech pioneer Genentech it didn't own already for $47 billion in March.