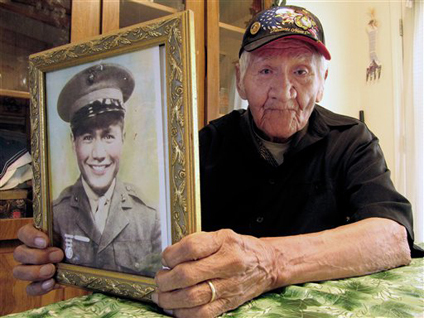 CAMP VERDE, Ariz. - Lloyd Oliver wasn't much of a talker, but it was clear that he was proud to have his native language serve as a key weapon during World War II. As part of an elite group of Marines, he helped develop and implement a code based on the Navajo language that helped win the war.

Years later, his hearing remained impaired because of gun blasts and other explosives during the war. He rarely brought up his time as a Code Talker, but his eyes gleamed when holding a picture of himself in his uniform. He kept a Marine cap and a U.S. flag displayed on his bedroom walls in the home he shared with his wife on the Yavapai Apache Reservation.

Oliver's death Wednesday means that only one of the original 29 Navajo Code Talkers survives — Chester Nez of Albuquerque, N.M. The 88-year-old Oliver died at a hospice center in the Phoenix suburb of Avondale where he had been staying for about three weeks, his nephew, Lawrence, said Friday.

"It's very heartbreaking to know that we are losing our Navajo Code Talkers, and especially one of the original 29 whose stories would be tremendously valuable," said Yvonne Murphy, secretary of the Navajo Code Talkers Foundation.

Hundreds of Navajos followed in the original code talkers' footsteps, sending thousands of messages without error on Japanese troop movements, battlefield tactics and other communications critical to the war's ultimate outcome.

The Code Talkers took part in every assault the Marines conducted in the Pacific.

Navajo President Ben Shelly called Oliver a "national treasure" and ordered flags lowered across the reservation in his honor.

Oliver, who preferred not to have a hearing aid, spoke audibly but his words could be difficult to understand.

The Code Talkers were instructed not to discuss their roles and felt compelled to honor those orders even after the code was declassified in 1968. His military records make a single mention of "code talker." He otherwise was listed as "communication duty," or "communication personnel."

Oliver was attending school in Shiprock, N.M., when he signed up for the Marine Corps in 1942 and was discharged as a corporal three years later. Much of his military record focuses on the financial support he provided for his siblings.

Oliver wrote in a 1943 document that his father died recently and his mother didn't make enough to take care of them. He would send $15 or $20 a month to his mother, Ollie, who worked at the U.S. Army's Navajo Ordnance Depot in Bellemont at the time.

"I am now the chief support," he declared in the document.

Oliver's brother, Willard, also served as a Code Talker and died in October 2009. Lawrence Oliver, who is Willard's son, said the two men never spent much time together because his father lived on the reservation and his uncle worked as a silversmith in the Phoenix area.

He recalled one day in the early 1970s when Willard Oliver looked toward a mountain on to a dirt road in the reservation town of Lukachukai and saw a man driving up.

Turns out, the driver — Lloyd Oliver — was in the right place.

When he married his second wife, Lucille, in 2006 after they had been together for years, he was able to mutter "I do." But "those were the only two words," she said.

The couple moved to the Phoenix area last year as his health was failing. His family remembered him as a quiet, giving man.

"We will miss his wonderful smile most of all. He loved his family and was very proud to be a Navajo Code Talker," his stepdaughter, Louanna Hall said in a statement.

Oliver's attention to cleanliness was meticulous. He smoothed out wrinkles in a table cloth, picked up crumbs from the floor, and brushed the dirt off the stucco wall and rose petals off the driveway during a visit with The Associated Press in September 2009.

Oliver communicated with most people through body language or notes, though he could understand what was being said and particularly liked being spoken to in Navajo.

During the visit with the AP, he muttered his recollection of his service as "overseas in the war," and laughed off assertions that he was famous for it.

Oliver's life was peppered with honors and awards after the Code Talkers became well-known. He received the Congressional Gold Medal in 2000 and served as a guest of honor in the nation's largest Veterans Day parade.

Oliver traveled with his grandson and a dozen other Code Talkers to New York in November 2009. He smiled as he looked up at the tall buildings and visited HBO studios and Ellis Island, said Murphy, of the Navajo Code Talkers Association, who went along on the trip.

"He was such a sweet man," said Murphy, the daughter of a Code Talker. "His disposition and character spoke widely of him even though he wasn't verbal."