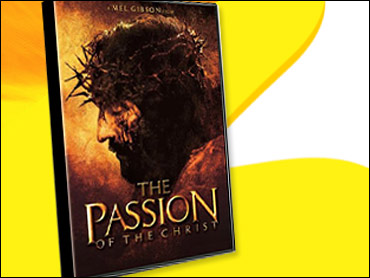 One of the successful and controversial films of the year makes its way to home video this week.

Entertainment contributor and People magazine senior editor Jess Cagle has all the details in The Early Show's Home Theater.

Back in March when "The Passion Of The Christ" was released in theaters, a lot of people wondered what Mel Gibson was thinking when he spent $30 million of his own money on a religious epic completely in Aramaic. Well, they seem to have been very wrong. In the end, of course, his labor of love also became a box-office smash.

Cowritten, coproduced and directed by Gibson, "The Passion Of The Christ" details the final hours and cruxifiction of Jesus Christ.

The controversy began when critics from different denominations denounced it as being anti-Semitic, even before many had seen it. Others were shocked by the graphic depiction of Jesus' suffering.

Gibson has granted very few interviews about the controversy, but in a promotional interview that he released himself, he said it was a film that he had to make.

"I focused on the passion," he said. "It was my own own personal, personal meditiation. I found it healing for me, because, like most of us, you get to a point in your life when you're pretty wounded by everything that goes on around you, by your own transgressions, by other people. Life is a kind of scarring thing, so I used the passion as a meditation of healing myself"

The title role was played by Jim Cavizel, a devout Christian, who was warned the film could be career suicide

Cavizel noted, "You know Mel actually said that to me when I took the film, he said 'You know, you may never work again,' but I can go down with this ship. If this is the one that takes me out, then that's fine with me. I'd like to work again, but I've never been a guy who would sell his soul to get money and fame. It was never my goal. It was to serve my faith, my God."

Thanks, in part, to a grass-root direct appeal to churchgoers, the film made over $125 million in its first five days. It has since grossed a total of $370 million in the U.S, making it the second-biggest film of the year and the seventh-highest grossing movie of all time.

While it's still too early to see how the video will do, expectations are so high that 20th Century-Fox has reportedly shipped more than 10 million copies to retailers. It's already on its way to becoming one of the highest selling releases of all time.