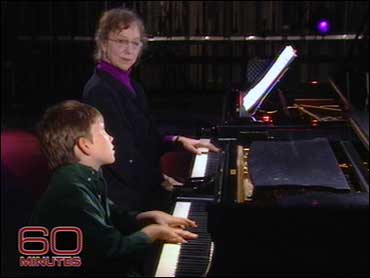 The human mind can be mystifying in its capacity to accommodate both disability and genius in the same person, as 60 Minutes found in a little boy named Rex.

Rex was born blind, with brain damage so severe it looked as though he would never walk, talk, or do much of anything. And yet he has a talent few of us can imagine. To understand Rex's brain would be to unlock mysteries of language, memory, and music.

Correspondent Lesley Stahl has followed Rex and his mother, Cathleen, for several years now; she first met them in 2003.


Rex Lewis-Clack at age eight was a study in contrasts. Blind and full of enthusiasm, Rex was unable to dress himself, or even carry on a basic conversation.

But with everything Rex can't do, he can instantly identify any note that is played for him. It's a talent only one in 10,000 people have.

But that was just the beginning of Rex's gifts at the piano.

Stahl played Rex a song he had never heard – "Do You Know the Way to San Jose" – with Rex's piano teacher singing along. Despite not being able to see the keys, Rex was able to play the song himself after a single hearing.

Rex is a musical savant, one of a handful of people in the world who share a mysterious combination of blindness, mental disability, and musical genius.

But away from the piano, Rex was a different child, easily upset and confused by basic concepts.

The savant gift remains a mystery, which drew 60 Minutes back to Rex last year to see how he has progressed.

At age 10, Rex was as charming and excitable as ever.

"It's nice to see you, Lesley. Are you having a good day?" Rex asked Stahl.

When asked what he likes to do and if he had ever been in a swimming pool, Rex said no.

"Oh, we have a swimming pool at home, Rex," his mother said.

At the piano, Rex has improved dramatically. He worked diligently, and had moved beyond repeating music into the realm of genuine creativity.

In one exercise, one of his two new teachers, Sara Banta, makes up a run of music, and Rex has to instantly offer a musical response. "Some days we get a volley that goes on for a long time, you know, like a tennis volley," explains Banta.

Asked whether he is just making up his musical responses, Rex said, "Yes, Lesley," with a laugh.Rex was born with a cyst in his brain. He was blind, didn't learn to walk or talk, and developed autistic-like symptoms. It seemed there was little hope for Rex, until his second birthday, when his father gave him a keyboard.

But with all his accomplishments, those dexterous little fingers still can't button a button, And real conversation continues to elude him. Emotionally too, Rex is immature.

But not so in his music, says David Pinto, Rex's other piano teacher, who specializes in working with the blind.

Rex is even driven to practice the dreaded scales. But he gets really agitated when he doesn't get something just right. "We need to try this over again," Rex said, visibly irritated at one point.

David thinks Rex's frustration is counter-productive, and has started turning the mistakes into a game. "I deliberately had him go faster and faster, and I said, 'OK, now you're going to make a mistake.' But if you make a mistake, all you have to say is 'No big deal.'"

During an exercise, Rex made a mistake, started to moan, prompting David to take his hands off the piano.

"OK, stop. What are you going to say?" David asked. "No big deal," Rex replied, and completed the exercise perfectly.

David introduced Stahl us to another of his students, 11-year-old Rachel Flowers. Rachel is also blind and a musical prodigy.

David teaches Rachel piano; the flute she is teaching herself.

"She picked up the flute five, six months ago. And now she can play in a nightclub as a jazz flautist. She's just amazing," says David.

And she's improvising. Intellectually, Rachel performs at grade level, but she lags in social skills, focusing almost obsessively on music.

"There is this intriguing triangle of blindness, mental impairment of some kind, and it doesn't have to be the same, and musical genius," Stahl remarks.

"I think that gives us a clue about ourselves. A child who has a limitation has a direct access to parts of themselves that we have in us, but we don't have access to it," replies Pinto.

Sometimes Rachel and Rex play together, and have the musical equivalent of a conversation.

Outside of the music, Rex and Rachel have no interaction. Rex's mother explains her son is not interested in Rachel, the person – just the music. "Maybe down the road, it'll be Rachel the person," she added, laughing.

As Rex and Rachel grow up, will their remarkable talents continue to develop, or will disability at some point get in the way?

A surprising answer can be found in a young man named Derek Paravicini, a brilliant jazz pianist. Twenty-six years old and blind, Derek is even more mentally impaired than Rex.Derek was born extremely premature, weighing just a pound and a half. Like Rex, he started playing the piano at age two, and began lessons at age five. His teacher was Adam Ockelford, who worked with Derek daily for more than ten years.

Ockelford compares Derek's intelligence to that of a two-and-a-half-year-old. Derek does not dress himself, cannot do a button and needs assistance going to the bathroom.

With all his disabilities, though, Derek remembers every song he's ever heard. He's like a living iPod. He retains popular songs as easily as classical masterpieces, playing "The Girl From Ipanema" and Beethoven's "Für Elise" upon Stahl's request.

And he doesn't just remember the music – he can transform it instantly and seemingly without conscious thought.

Stahl asked Derek if he could play "Für Elise" as if Mozart had written it and Derek performed the piece "a la Mozart" with a smile.

When asked how he knows how to do that, Derek replied, "I can't remember."

"Do you think that we will ever really understand how they do it?" Stahl asks Ockelford.

"No," he replies. "I don't think so. We don't understand how any of us enjoys music or can play, let alone a Derek or a Rex who have such outstanding abilities."

Just imagine what Rex's life would be without music. This little boy was flown with his mother halfway around the world to Tokyo last year for his first paid concert before an international audience of 3,000.

If Rex keeps at it the way Derek has, with lessons and practicing every day, though he may never be a virtuoso classical soloist, he may well be headed toward a career in music that will outlive the childish charm.

"People can sense a sweetness from the stage don't they?" Stahl asks David Pinto.

"Oh yes. Later on, though, aside from his disability, aside from that he's an adorable kid, when he's a grown up, can he compete in the world of music? I think so," he says.
Produced By Shari Finkelstein