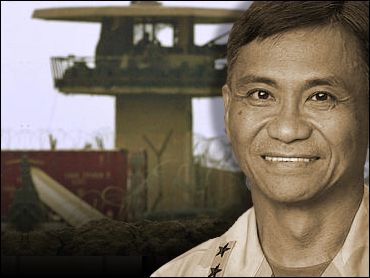 The Army general who probed abuse at Abu Ghraib prison is the son of an Army sergeant who was taken prisoner by the Japanese during World War II.

Major Gen. Antonio Taguba, 53, stepped into the national spotlight on Tuesday with testimony before the Senate Armed Services Committee. His report on the U.S.-run prison complex near Baghdad found numerous "sadistic, blatant and wanton criminal abuses."

Taguba's report has won praise for its thoroughness and a candor that some see as risky for a career military man.

Taguba's Army career came naturally. His father, Tomas Taguba, retired from the U.S. Army as a sergeant first class. According to the New York Times, the elder Taguba was taken prisoner by the Japanese during the battle of Bataan in 1942, but managed to escape and fight in the Filipino resistance until the end of the war.

The Los Angeles Times reported that Tomas Taguba made his escape during the infamous Bataan death march.

Gen. Taguba later lamented that his dad left the Army "without so much as a retirement ceremony to thank him for those 20 years of hard work and faithful service," according to the New York Times. [Tabguba's father and mother were cited for their work during the war in 1999.]

Born Oct. 31, 1950, Taguba spent his first 10 years in the Manila district of Sampaloc. The residential area features the Philippines' oldest institution of learning, the University of Santo Tomas. He grew up in a pious household with two brothers and five sisters.

The Tagubas' home district has a military history of its own.

Filipino historian Benito Legarda says Sampaloc was the site of the first American artillery bombardment and ground assault of the Philippine-American War, a bloody three-year exercise that followed the 1898 Spanish-American War and cemented U.S. control over the islands ceded by Spain.

From Sampaloc, the Tagubas emigrated to Hawaii when the boy was 11.

Antonio left the islands for Idaho and graduated in 1972 from Idaho State University. He joined the Army and, taking his advice about education being the key to success, steadily made his way through the ranks by attending numerous military and other schools.

Just promoted to major general, he was acting director of the Army staff last year when he honored his fellow Asian-Pacific Americans. He was deputy commanding general of the 3rd Army when assigned to investigate reports of wrongdoing among American military jailers in Iraq.