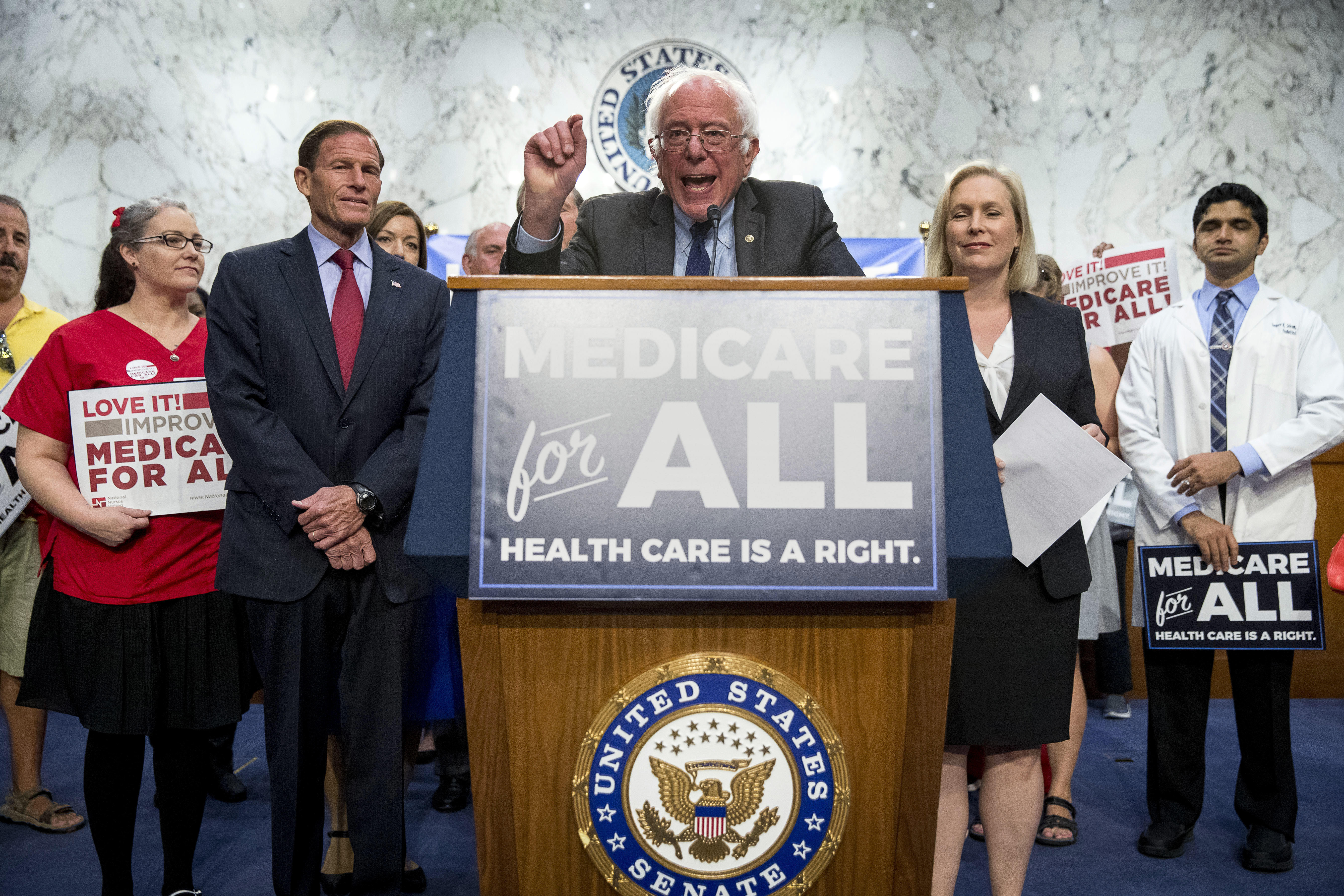 "Today, all of us stand before you and proudly proclaim our belief that health care in America must be a right, not a privilege," Sanders said, flanked by several Democratic senators co-sponsoring his bill.

The Vermont senator's bill seeks to set up a single-payer model for health insurance, which he says would make health care both less complicated and less expensive for Americans. It would expand the Medicare program to cover more of the 28 million individuals who currently lack health insurance, even under the Affordable Care Act.

During the Wednesday press conference, Sanders said that health care is "not only a moral issue, it is an economic issue," adding that under the current health care system, the United States spends 18 percent of its GDP on health care, or approximately $10,000 per person. He called this model "economically unsustainable for our country."

"Under Medicare for all, the average American family will be much better off financially than under the current system because you will no longer be writing checks to private insurance companies," Sanders said, noting that the bill's passage would cause taxes to increase.

"Everyone gets covered, no one goes broke and families in some of the toughest moments of their lives will not be left alone," Warren said in the conference Wednesday.

Harris spoke after Warren's remarks, saying that health care should be "a non-partisan issue."

"This is about a right, not about a privilege for a few," Harris said.

Sanders also added that "a whole lot of folks in the House of Representatives" and grassroots organizations are in support of his single-payer health care bill.

More moderate Democrats have expressed concern that the bill goes too far by risking a major tax increase and eliminating employer-provided coverage.

While some Democrats are focused on improving the already existing health care law, Sens. Chris Murphy, D-Connecticut, and Sherrod Brown, D-Ohio, plan to introduce their own health care bills that would expand coverage, but on a lesser scale compared to Sanders' legislation.

Meanwhile, Republicans have begun crafting their own answer to the high price of health insurance. Sens. Lindsey Graham, Bill Cassidy, Dean Heller, and Ron Johnson, introduced their plan after the GOP's failed attempts at repealing and replacing Obamacare over the summer. Their bill would transition federal health care funding into state-by-state block grants.

"We refuse to quit, we have been working on a bill that should've been our first approach to repealing Obamacare, not our last," said Graham at a press conference introducing the plan Wednesday.

"If you want a single-payer system, this is your worst nightmare. Bernie, this ends your dream of a single-payer health care system for America," he said.

Meanwhile, Sanders called out congressional Republicans and condemned their support of the Obamacare repeal and replace efforts, which would result in millions more Americans remaining uninsured, according to government estimates.

"Not only does the president not support [Sen. Sanders' bill], but America doesn't support it, or Bernie Sanders would be sitting in the Oval Office right now," she said. "He pushed these ideas during he campaign, they were rejected, not just by America but by Democrats. He didn't make it into the primary, he didn't make it into Oval, I think that's a pretty clear indication of what America wants to see, and it's not a single-payer system."

Neither Sanders' bill nor the GOP-sponsored bill is likely to pass in the Senate.

Sanders thanks participants, concludes the conference

"Here is the simple truth: our opponents on this issue have the money and they have the power," Sanders said, calling on American citizens to get involved in the political process and concluding his Medicare-for-All remarks.

Sen. Mazie Hirono calls for "quality health care for all"

Sen. Mazie Hirono, D-Hawaii, gave her personal testimony of her battle against stage four kidney cancer, adding that the health insurance that saved her life should be accessible to all.

"Justice is quality health care for all as a right, not a privilege," She said.

Sen. Cory Booker: "this is a defining moment"

"You cannot have justice in this country where you have millions of Americans who cannot get access to basic health care because of the amount of money they make," said Sen. Cory Booker, D-New Jersey.

"This is a defining moment of the character of our country," he said.

"This is about a right, not about a privilege for a few," said Sen. Kamala Harris, D-California, a co-sponsor of the Medicare-for-All bill, identifying health care as "a non-partisan issue."

Sanders invited several senators who have announced their support of the bill to speak.

"Never again in America does anyone go bankrupt just because they got sick,"said Sen. Elizabeth Warren, D-Massachusetts, who is a co-sponsor of Sanders' legislation.

"Everyone gets covered, no one goes broke and families in some of the toughest moments of their lives will not be left alone," she said.

Sanders concludes his remarks, invites other senators to speak

The Vermont senator said that his Medicare-for-All bill will "guarantee health care to all Americans as a right."

Sanders said that 16 senators and "a whole lot of folks in the House of Representatives," as well as grassroots organizations, support his health care legislation.

"To my Republican colleagues: please don't lecture us on health care," Sanders said.

He criticized Republicans who supported efforts to repeal and replace the Affordable Care Act over the summer, which would have taken health care away from 32 million citizens.

"You, the Republican Party, have no credibility on the issue of health care," Sanders said.

Sanders said that under his bill, Medicare coverage would expand to include dental care, hearing aids, and vision.

"As good as Medicare is, we have heard your concerns," Sanders said.

Sanders on the cost of health care:

Sanders began his remarks by noting that the United States spends 18 percent of its GDP on healthcare, or roughly $10,000 per person.

"That is economically unsustainable for our country," he said.

Sanders then called out insurance companies and drug manufacturing companies who profit from the U.S. health care system for their "greed."

"Under Medicare-for-All, the average American family will be much better off financially than under the current system because you will no longer be writing checks to private insurance companies," he said, noting that taxes will go up as a result of the bill's passage.

"Access to health care is a human right," she said, noting the ease with which she accesses medical care in Canada.

Health care as "a moral issue" and "an economic issue"

"Health care for all is not only a moral issue, it is an economic issue," Sanders said.

Sanders then invited CEO of MCS Industries Inc. Richard Master to speak to health care's role in the U.S. economy.

"I encourage every member of Congress to leave their ideology at the door and to work with us," he said.

"We are finally making health care a basic human right," said a physician and pediatrician from the George Washington University Medical Facilities.

Sanders also invited an oncologist up to the podium to speak who identified the financial challenges her cancer patients face throughout their treatment.

"I see the suffering and pain this causes every single day in the faces of my patients," she said of the current health care system's effects.

Senator Sanders began by thanking the Democratic senators present at the press conference for their support of his single-payer health insurance bill proposal.