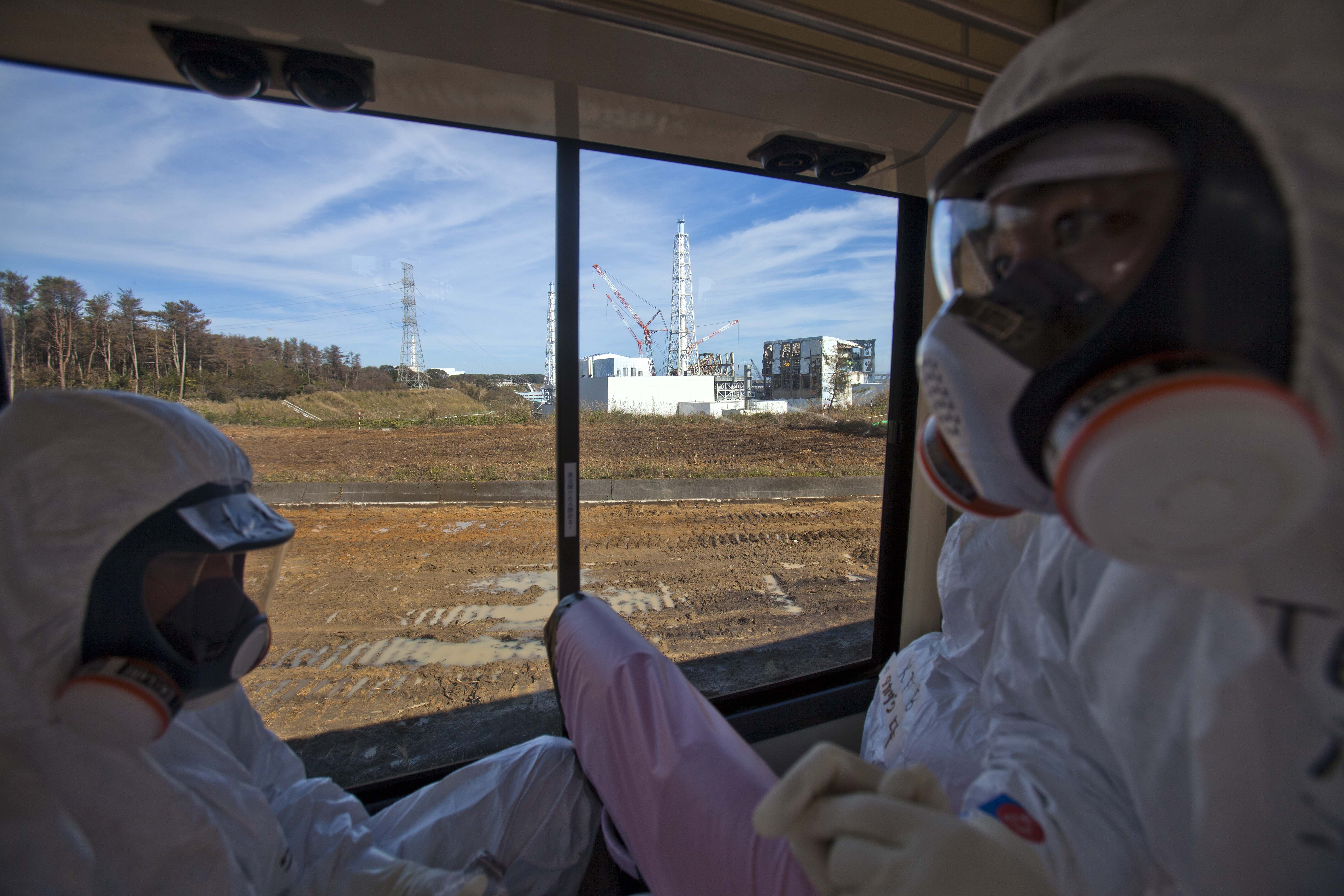 In their shadow, plumbers, electricians and truck drivers, sometimes numbering in the thousands, go dutifully about their work, all clad from head to toe in white hazmat suits. Their job — cleaning up the worst nuclear disaster since Chernobyl — will take decades to complete.

Reporters, also in radiation suits, visited the ravaged facility Saturday for the first time since Japan's worst tsunami in centuries swamped the plant March 11, causing reactor explosions and meltdowns and turning hundreds of square miles of countryside into a no man's land.

Eight months later, the plant remains a shambles. Mangled trucks, flipped over by the power of the wave, still clutter its access roads. Rubble remains strewn where it fell. Pools of water cover parts of the once immaculate campus.

Tens of thousands of the plant's former neighbors may never be able to go home. And just as Hiroshima and Nagasaki become icons of the horrors of nuclear weapons, Fukushima has become the new rallying cry of the global anti-nuclear energy movement.

Yet this picture is one of progress, Japanese officials say. It has taken this long to make the plant stable enough to allow Saturday's tour, which included representatives of the Japanese and international media — including The Associated Press. Officials expect to complete an early but important step toward cleaning up the accident by the end of the year.

"I think it's remarkable that we've come this far," Environment Minister Goshi Hosono, Japan's chief nuclear crisis response official, said before leading the tour. "The situation at the beginning was extremely severe. At least we can say we have overcome the worst."

The group was taken through the center of the facility, a once-neat row of reactor buildings that are now shells of shattered walls and steel frames. Journalists were then briefed inside the plant's emergency operations center, a spacious, bunker-like structure where it is safe to remove the heavy protective gear required outdoors.

Woefully unprepared for the wave that swept over its breakwater, the plant just 140 miles northeast of Tokyo was doomed almost from the start.

"During the first week of the accident, I thought several times that we were all going to die," plant chief Masao Yoshida said.

At the height of the crisis, all but a few dozen workers — dubbed the "Fukushima 50" — were evacuated. Officials boast that number is now up to as many as 3,000 a day, compared with the pre-crisis work force of 6,400.

Evidence of the tremendous man-hours already invested in the cleanup is piling up in the workers' staging area, on the edge of the 12-mile (20-kilometer) no-go zone around the plant. More than 480,000 sets of used protective gear — which can be worn only once — lie in crates or plastic bags at the complex, which before the tsunami was a training facility for national-level soccer teams.

"Obviously, it was very dangerous at that time," he recalled during a recent visit to Tokyo. "Luckily, we got out without experiencing any life-threatening situations."

Workers like Okawa — in Chernobyl they were called "liquidators" — have restored the plant's supply of electricity, set up elaborate cooling and drainage systems, rebuilt crumbled walls and erected a huge tent to cover one of the worst-hit reactors, cutting the amount of radioactivity leaking into the surrounding environment.

Tokyo Electric Power Co., which runs the plant, says it will achieve a "cold shutdown" by the end of the year — a first step toward creating a stable enough environment for work to proceed on removing the reactors' nuclear fuel and closing the plant altogether.

But that is by no means the end of the story.

A preliminary government report released this month predicted it will take 30 years or more to safely decommission Fukushima Dai-ichi. Like Chernobyl, it will probably be encased in a concrete and steel "sarcophagus."

Hiroaki Koide, a nuclear physicist at Kyoto University, said he doubts the decommissioning process will go as smoothly as the government hopes. He said pools for spent fuel remain highly volatile, and cleaning up the three reactor cores that melted through their innermost chambers will be a massive challenge.

"Nobody knows where exactly the fuel is, or in what condition," he said. "The reactors will have to be entombed in a sarcophagus, with metal plates inserted underneath to keep it watertight. But within 25 to 30 years, when the cement starts decaying, that will have to be entombed in another layer of cement. It's just like Russian Matryoshka dolls, one inside the other."

The no-go zone around the plant will likely be in effect for years, if not decades, to come. Officials reluctantly admit that tens of thousands of evacuated residents may never be able to return home.

Recent studies suggest that Japan continues to significantly underestimate the scale of the disaster — which could have health and safety implications far into the future.

According to a study led by Andreas Stohl the Norwegian Institute for Air Research, twice as much radioactive cesium-137 — a cancer-causing agent — was pumped into the atmosphere than Japan had announced, reaching 40 percent of the total from Chernobyl. The French Institute for Radiological Protection and Nuclear Safety found that 30 times more cesium-137 was released into the Pacific than the plant's owner has owned up to.

"We have not studied the content of their research, and are not in a position to respond," said Hiroki Kawamata, a TEPCO spokesman. "We have no plans at this point to modify our estimates."

Before the crisis, resource-poor Japan relied on nuclear power for about one-third of its electricity. It was planning to boost that share to 50 percent by 2030.

Without nuclear, Japan will have to import more fossil fuels, cutting its potential GDP by 1.2 percent and costing 7.2 trillion yen ($94 billion) annually, according to an estimate by the Japan Center for Economic Research.

But public support for nuclear power — and the trust that the industry is built on — has plummeted.

Tens of thousands of Japanese have turned out in protest. Suspicious of government and TEPCO reassurances, grassroots groups are scouring the country with radiation detectors. Several "hot spots" in and around Tokyo are now being investigated by the authorities.

Because of the outcry, Japan has essentially abandoned its long-term goal of expanding nuclear energy production. The status of even its existing plants is murky.

Currently, 43 of Japan's 54 nuclear reactors are shut down, either because of mechanical problems or routine inspections, which must be conducted every 13 months. Local approval is required to restart nuclear power plants, even after routine inspections, and local leaders fearing repercussions at the polls have been loath to provide it.

TEPCO announced two weeks ago there will be enough power to see the country through the winter, but after that, the effect of the nuclear crisis on electricity production could become even more acute. If political resistance remains as high as it is now, every nuclear reactor in Japan could be offline by May.