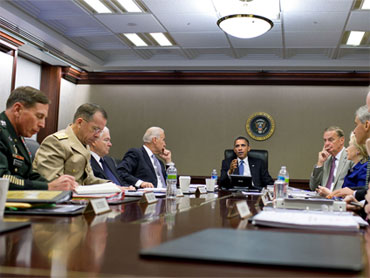 Though he never served in the military, President Obama today served notice on Pentagon brass that he's a tough Commander-in-Chief with zero tolerance for comments that undermine his authority or policies.

In relieving Gen. Stanley McChrystal of command in Afghanistan, Mr. Obama said he wasn't acting "out of any sense of personal insult" for the critical comments attributed to McChrystal and unnamed aides in the new issue of Rolling Stone.

"The conduct represented in the recently published article does not meet the standard that should be set by a commanding general," the president said in a Rose Garden statement.

In his view, "it undermines the civilian control of the military that is at the core of our democratic system." In other words, as Commander-in-Chief, he demands respect and not a hint of insubordinate language, much less conduct.

Ironically, parts of Mr. Obama's 8-minute statement sounded more like a lavish tribute to Gen. McChrystal, not an explanation of why he was being fired.

Mr. Obama conceded that there were no policy differences at issue with Gen. McChrystal. He said they are "in full agreement" about U.S. strategy in Afghanistan.

And the word insubordinate did not appear in Mr. Obama's statement in any form.

But just as he made the argument that McChrystal could not stay in his post, another president might have brushed off the remarks in the article, reprimanded the general and kept him on the job.

But the president said there must be "strict adherence to the military chain of command and respect for civilian control over that chain of command." He felt McChrystal was in breach of that policy. He said the military code of conduct "applies equally to newly enlisted privates and to the general officer who commands them."

In fact, Mr. Obama said he expects the same conduct from the civilians on his national security team. He said he told them today that "now is the time for all of us to come together." He called it "an obligation" and "not an option."

"I welcome debate among my team, but I won't tolerate division," he said.

It's a blunt statement of policy from a president 17 months on the job.