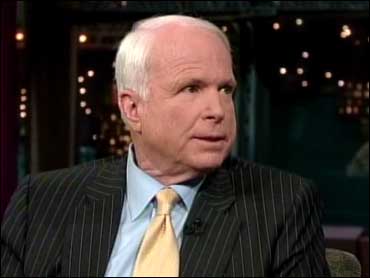 Republican Sen. John McCain will officially enter the presidential race — his second run after a bitter loss to George W. Bush in 2000 — with a formal announcement in early April.

The Arizona senator disclosed the timing of the long-expected announcement in a taping for the "Late Show With David Letterman" on CBS for airing Wednesday night.

"I am announcing that I will be a candidate for president of the United States," the senator told the talk show host — and then added he would give a formal speech to that effect in early April.

There was no doubt that McCain would eventually become a full-fledged White House candidate, and he had been expected to make his candidacy official in the spring.

The 2006 midterm campaign had just ended when McCain took the first formal step toward a presidential run in November. He formed an exploratory committee and gave a speech casting himself as a "common-sense conservative" in the vein of Ronald Reagan who could lead the party back to dominance after a dreadful election season by returning to the GOP's core principles.

A political celebrity, McCain is considered a top contender for the nomination.

However, he faces strong challenges from former New York Mayor Rudy Giuliani, who has widened his lead over McCain in popularity polls in recent weeks, and former Massachusetts Gov. Mitt Romney, who is little-known nationally but is drawing notice for his deft fundraising.

The other two have spent the past two months mostly campaigning while McCain largely has been tied to Capitol Hill in his role as the highest-ranking Republican on the Senate Armed Services Committee, which is focused largely on the unpopular Iraq war.

McCain, a former Navy pilot who was a prisoner of war in Vietnam, has emerged as the Senate's go-to guy on Iraq. He has become President Bush's most outspoken supporter of sending 21,500 additional U.S. troops to Iraq, a position that could endear him to GOP primary voters but anger much of the rest of the electorate.

A four-term senator, McCain unsuccessfully ran for president in 2000 against Bush and has been laying the groundwork for a second run for more than a year.

Since losing that race, McCain has alternately challenged and embraced the president, building an independent reputation as one who isn't afraid to speak his mind. At the same time, he's sought to mend fences with conservatives he alienated in his first presidential run.

Should he win this nomination and then the presidency, McCain, 70, would be the oldest president ever sworn into office for a first term. Only Reagan, who was 73 at the start of his second term, was older.