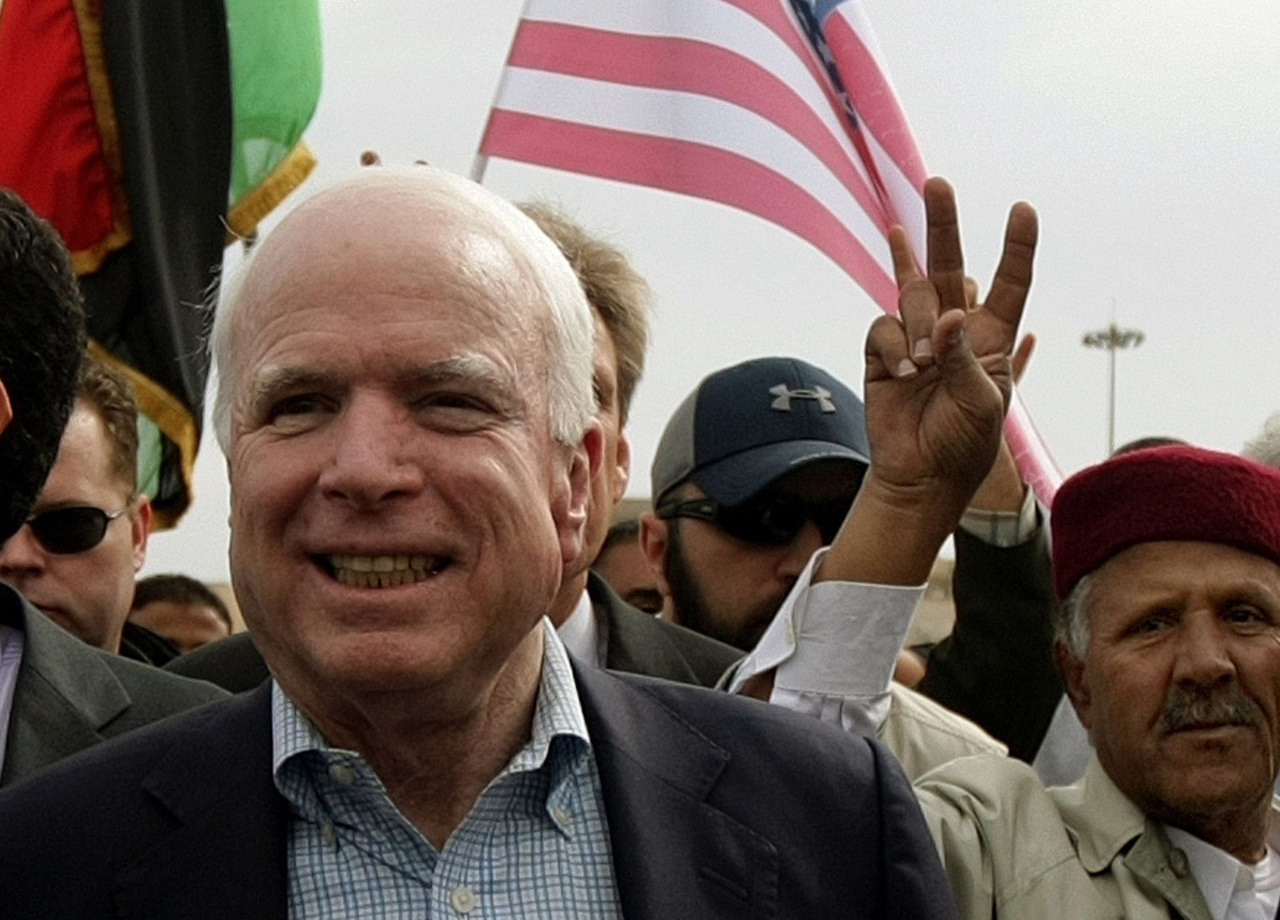 BENGHAZI, Libya - U.S. Sen. John McCain, one of the strongest proponents in Congress of the American military intervention in Libya, called Friday for increased international military support of the rebel fighters.

The top Republican on the Senate Armed Services Committee spoke in Benghazi, a city that has been the opposition capital in the rebel-held eastern Libya.

McCain said he was in Benghazi "to get an on-the-ground assessment of the situation" and to meet with opposition leaders and members of the rebel military.

"They are my heroes," McCain said of the rebels as he walked out of a local hotel in Benghazi.

He also said today the rebel Transitional National Council deserves recognition as the legitimate voice of the Libyan people.

Reporting from Benghazi, Libya, CBS News correspondent Allen Pizzey said the arrival of McCain is exactly the kind of VIP trip the Transitional National Council has been looking for.

McCain told Pizzey that what he really thinks should happen is that $30 billion in assets that are already frozen that belong to Libya, should be released to the Transitional National Council so that they can get this part of the country working.

The rebel military effort also got a vote of confidence, but not a total commitment from the Senator.

"They also need weapons but those I think could be provided by other countries," McCain told Pizzey.

Meanwhile, the Chairman of the Joint Chiefs of Staff said today that the conflict in Libya is moving closer to a "stalemate," but that the U.S. will not take steps to arm the rebels at this point.

"The U.S. position on arming the rebels is clear ... right now, that's not going to happen" Adm. Mike Mullen told reporters at a press conference in Iraq.

He said that the fighting in the eastern cities of Ajdabiyah and Brega had become "essentially very stalemate-like," and noted that, while Qaddafi's forces had been degraded by 30 to 40 percent, they have also shifted tactics in order to minimize the threat of NATO airstrikes.

Mullen also reiterated that the long-term U.S. goal is "to see Qaddafi and his family out of power" though specifics about how the achieve that end are unclear.

Video: Win or die for rebels in Misrata
Complete coverage: Anger in the Arab World

McCain's visit is the highest yet by an American official to the rebel-held east and a boost to the anti-Qaddafi forces. Details of the trip were shrouded in secrecy due to heightened security in a country fiercely divided by the two-month-old anti-Qaddafi rebellion.

McCain's trip comes after Defense Secretary Robert Gates announced Thursday that President Barack Obama has authorized armed Predator drones against forces loyal to Qaddafi. It is the first time that drones will be used for airstrikes since the United States turned over control of the operation to NATO on April 4.

The rebels have complained that NATO airstrikes since then have largely been ineffective in stopping Qaddafi forces.

McCain said the Libyan rebels need a lot of help, and that he is glad President Obama has authorized use of two armed Predator drones against the Libyan government's military; he thinks they should have been used earlier.

"I think the idea has come a long time ago, particularly since we are not using the most effective assets which we have, which are the A-10s and the AC-130s," he told Pizzey.

"I hope the Predator will be effective. It will hopefully prevent further humanitarian disaster taking place in Misrata."

Invoking the humanitarian disasters in Rwanda and Bosnia in the 1990s, McCain pressed for U.S. military intervention in Libya in February, weeks before the U.N. Security Council authorized military action to protect civilians and impose a no-fly zone.

When Mr. Obama acted with limited congressional consultation, McCain defended the president, saying he couldn't wait for Congress to take even a few days to debate the use of force. If he had, "there would have been nothing left to save in Benghazi," McCain said.

But as the U.S. handed operational control over to NATO — and withdrew U.S. combat aircraft — McCain criticized the administration.

"For the United States to withdraw our unique offensive capabilities at this time would send the wrong signal," McCain said. He said the U.S. must not fail in Libya and said he spoke as someone experienced in a lost conflict, a reference to his time as a prisoner of war in Vietnam.

McCain also has pushed for arming the rebels, saying the U.S. and its partners cannot allow Qaddafi to consolidate his hold on one section of the country and create a military deadlock.

Rebels in the western Libyan city of Misrata are celebrating gains. They raised their tricolor flag today over an eight-story building with a commanding view of the main thoroughfare through the city.

Rebel fighters drove Muammar Qaddafi's forces from the building and others nearby, where snipers had been keeping rebel fighters pinned down and terrorizing residents for weeks.

Hundreds of people have been killed during the government's siege of Misrata. NATO air forces have been largely unable to strike because of how close government forces are to civilians.

Farther west, rebels have consolidated control over a border crossing with Tunisia. The crossing has opened a supply line to a rebel stronghold in Libya's western mountains.