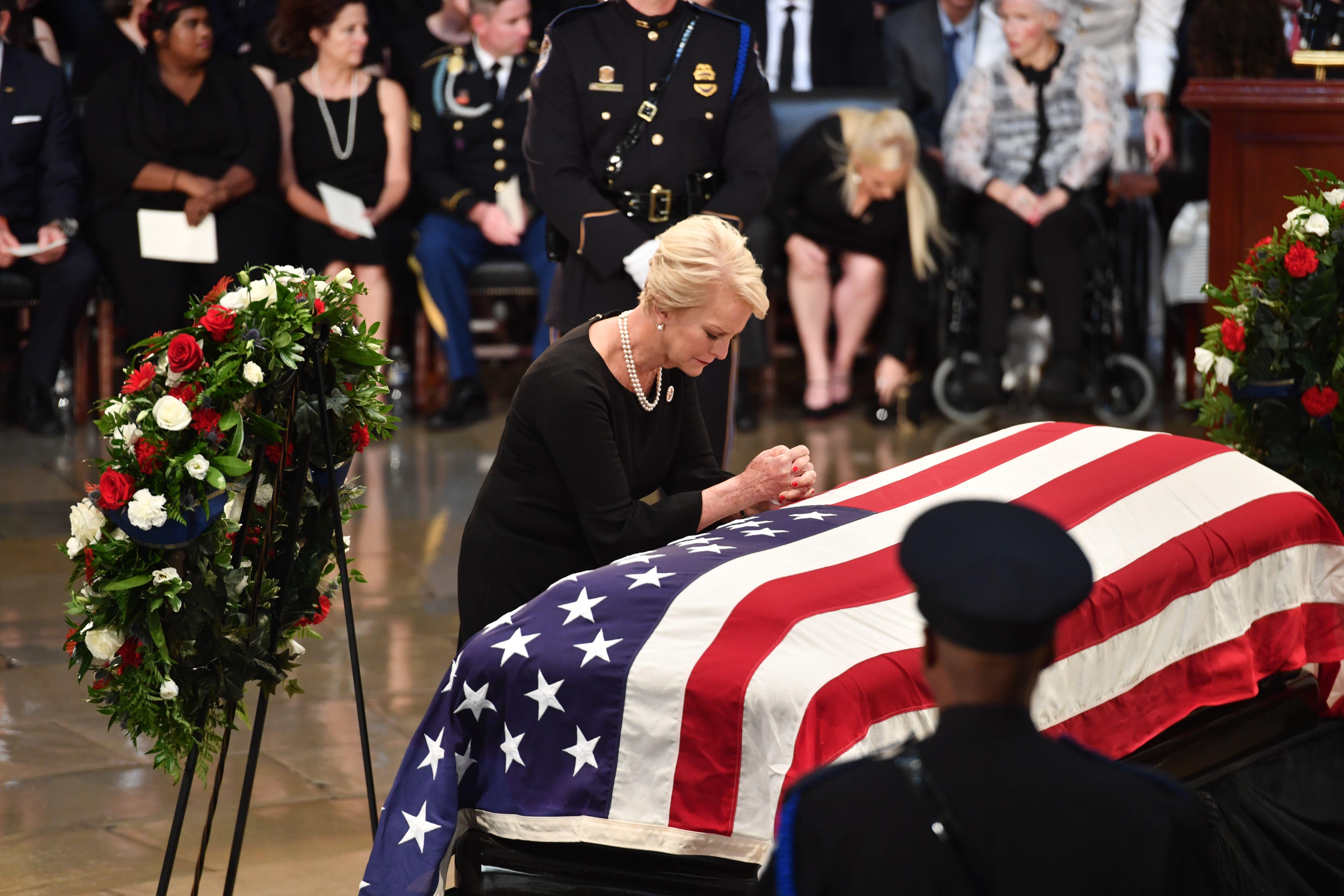 The nonprofit named for the late Sen. John McCain is looking for "mavericks" to vote in the Nov. 6 midterm election and fight for human rights around the world. The plea comes as President Trump pursues his "America first" foreign policy.

"The ideals that John spent his life fighting for weren't just his, they are American values — and it's time to fight for them again," McCain's widow, Cindy, says in a video that's part of the "Mavericks Needed" nonpartisan campaign to be announced Tuesday.

The rollout, previewed by The Associated Press, comes about two months after McCain's Aug. 25 death at 81 from brain cancer.

The Arizona Republican was honored at a memorial service that was widely seen a bipartisan rebuke of Mr. Trump by official Washington. The service came after a cross-country funeral procession that McCain planned himself, including its themes of preserving freedom and serving a greater cause. Forming the backdrop was his life story: The scion of a Navy family, McCain was held as a prisoner of war in Vietnam and returned to serve in Congress for more than three decades. He never became president, but after two campaigns he returned to the Senate to burnish his brand as a party-bucking "maverick."

McCain at the end of his life made clear his disdain for Mr. Trump and his sense that the United States was losing its way on human rights.

The issue is especially relevant amid the international outcry over the killing of journalist Jamal Khashoggi in a Saudi Arabian consulate in Turkey. The controversy has raised questions not just for the Trump administration, which is closely aligned with the Saudis, but also for American institutions that have accepted the country's money. The McCain Institute for International Leadership at Arizona State University, the entity launching the "Mavericks Needed" campaign, is among the recipients of Saudi cash.

The Royal Embassy of Saudi Arabia donated $1 million to The McCain Institute Foundation in 2014, the largest single gift listed on its tax filings since its creation in 2012. The nonprofit also gets large donations from other sources. It was established with about $8.7 million from the McCain-Palin Compliance Fund, a political account used to pay for legal and other fees related to McCain's 2008 presidential campaign.

Kurt Volker, executive director of the McCain Institute, said Monday that the Saudi gift was a one-time donation. He said the nonprofit would not accept any more Saudi funds.

He and other McCain acolytes said the institute has, from its inception, advocated for human rights as part of its broader agenda. In March, they presented the idea that became "Mavericks Needed" to McCain.

Volker said younger Americans, age 18 to 35, don't think about the term "human rights" — and when they do, they think of social justice issues like racial and gender-based discrimination. "They tend not to think in terms of fundamental freedoms, such as freedom from arbitrary arrest," he said.

Mark Salter, McCain's biographer, said the campaign is aimed at building a constituency. Both he and Volker said the effort is not about Mr. Trump.

"We've lost an important voice in human rights," Salter said of McCain. "We're trying to encourage other people who have a collective voice that was as potent and influential as his was. Even more so."

Developed in detail after McCain's death, the "Mavericks Needed" campaign features a centerpiece ad that includes McCain's voice from his speech to the Munich Security Conference in 2017. It will run on digital and social media platforms across five U.S. markets: Austin, Texas; Kansas City, Missouri; Minneapolis, Minnesota; Nashville, Tennessee; and Phoenix, in McCain's home state.

"We stand for truth against falsehood, freedom against tyranny, right against injustice, hope against despair," McCain's voice can be heard saying in the ad. "I believe we must always stand up for it. For if we do not, who will?"

In the version running between now and the midterm election, the one-minute spot closes with text on black background: "Vote on November 6."

A building-sized banner is expected to be unfurled Tuesday on ASU's Fulton Center in Tempe, Arizona.

A second version of "A Call For Mavericks" will run through March. The whole campaign is expected to run through 2020.