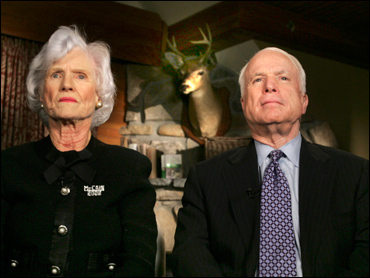 Republican John McCain, climbing in polls but lagging in money, is negotiating a $3 million loan while some of his backers launch an independent advertising effort seemingly at odds with his years of fighting outside influence in campaigns.

The ad campaign, financed by contributions from undisclosed donors, drew a prompt rebuke from McCain.

"I condemn them," he told The Associated Press on Friday. "They are a violation of everything I believe in."

Steps under way inside and outside McCain's campaign indicate a degree of urgency as the first nominating contests draw near and as he shows signs of resurgence after a dismal spring and summer.

Campaign aides said they hoped to finalize arrangements within days for a line of credit of about $3 million to help pay for expenses as well as for ads, mailings and other means of voter contact. The campaign also is considering taking public matching funds, but some aides fear the attached spending limits could hinder McCain if he does secure the nomination.

Separately, a newly created group was airing an ad Friday in South Carolina that portrays the Arizona senator and two of his congressional allies as "leaders who share our priorities" of supporting funds for U.S. troops and opposing pork-barrel spending.

"I have no clue about it," McCain said in a brief interview while campaigning in Meredith, N.H. "I didn't know they were doing them. I didn't even know about it until a short time ago."

In a statement issued later, McCain added: "If anyone considering an outside expenditure thinks they are benefiting me, I would prefer they do not air the ads. If there are ads up, I believe they should come down."

Financed mainly by McCain backers, the Foundation for a Secure and Prosperous America was created with the help of Republican admaker Rick Reed. He called himself a volunteer with McCain's presidential effort earlier this year, and he is close to McCain's campaign manager, Rick Davis.

McCain wrote a strict 2002 campaign finance law and has criticized independent advertising in the past. His aides said they had no knowledge of or involvement in any outside efforts.

Reed is not new to independent advertising efforts during presidential campaigns. He was the media strategist who co-produced a series of ads in 2004 by the Swift Boat Veterans for Truth, who questioned Democratic nominee John Kerry's service in Vietnam. McCain, at the time, condemned those ads.

"I condemned them when they were swift boat ads. I condemn them now," McCain said.

The new group, a 501(c)4 nonprofit corporation under IRS regulations, is not required to disclose its donors, unlike political campaign and political action committees the Federal Election Commission covers.

Reed would not disclose how much has been raised or the identity of donors. Asked if they were McCain supporters, he said, "Some are, maybe even all at this point."

He said the group is designed to promote a strong national security, limits in spending and vigorous anti-terrorism efforts while identifying leaders who best reflect the group's positions.

"Right now Senator McCain seems to be the closest to the group's views," Reed said. Others, he said, include South Carolina Sen. Lindsey Graham and Arizona Rep. John Shadegg; both appear in the first ad and both have endorsed McCain.

A disclaimer at the bottom of the group's Web site states: "As a qualified nonprofit organization, Foundation for a Secure and Prosperous America may on occasion use some of its funds for political purposes such as supporting or opposing persons who happen to be candidates."

Said McCain spokeswoman Jill Hazelbaker: "The McCain campaign does not coordinate with any outside groups that are making or planning to make independent expenditures in the presidential election."

The campaign paid Reed's firm $1,690 in May for what aides said was archival McCain footage from the 2000 campaign that was in the firm's possession. Aides said the firm has provided no services for McCain's 2008 bid.

Reed's effort could be the first of several independent ventures that could help McCain. Other supporters and donors have been discussing how to expand his advertising reach in key early nominating states. Backers of other presidential hopefuls also are contemplating independent efforts to boost their candidates.

Such steps allow major fundraisers and donors of candidates who have already given the maximum allowed by law to individual campaigns to assist their candidates by putting money into other entities.

By organizing itself as a nonprofit 501(c)4 organization, the Foundation for a Secure and Prosperous America can raise unlimited amounts of money for its ads without disclosing its donors or details of its spending. Under Internal Revenue Service regulations it can engage in political activity provided that is not the sole purpose of its existence.

The ad does not mention McCain's candidacy, but it does show pictures of him and flash his name. Broadly, the ad focuses on promoting military funding legislation in Congress and calling on viewers to urge Congress to approve.

Any independent ad campaign has to be unaffiliated to the McCain campaign and organizers would be prohibited by law from discussing their plans with McCain or his staff.

Reed said the group is abiding by the law, and that he had not spoken with the campaign since his firm ended an affiliation with it early this year.

Still, such a separate organization could undermine McCain's image as a campaign finance reformer by creating the appearance that McCain backers are exploiting loopholes in the law.

McCain was one of the authors of a 2002 campaign finance law that ended the ability of national parties to collect unlimited contributions known as soft money. McCain also has criticized the emergence of other nonprofit groups, known as "527" organizations, that have skirted campaign finance laws and raised millions in unlimited money from wealthy donors.

"On the one hand, he's obviously always been a strong proponent of campaign finance reform," said Dan Schnur, a Republican strategist who worked on McCain's 2000 campaign but who is unaffiliated now. "On the other hand, I know he doesn't believe in unilateral disarmament either."

McCain is considering accepting public matching funds for his campaign. At this point, he would be eligible for $5 million, but aides said McCain has made no decision on whether to seek the money. McCain is the only Republican at the top of the presidential field who has taken steps to obtain the public funds. By accepting the money, McCain would have to restrict his spending in primary states, placing him at a potential disadvantage against better-financed rivals.

Once considered the GOP front-runner, McCain found himself all but broke and languishing in polls at summer's end. As fall began, his fortunes improved, and he now senses opportunity, particularly in New Hampshire and South Carolina.

The compressed primary calendar has increased pressure on his campaign to capitalize on his improved standing — and spend heavily on television ads. The Iowa caucuses are scheduled for Jan. 3 and could be followed promptly by the New Hampshire primary. Michigan is considering holding a primary Jan. 15, followed by South Carolina on Jan. 19.

McCain ended the third quarter of the year with $3.5 million, $1.7 million of which was available for the primaries. He also reported a debt of $1.7 million.

He's been running ads in New Hampshire, recently expanding to the expensive Boston market, but he has been unable to afford to go on the air in South Carolina, though advisers say he will soon. The campaign is also conducting direct mail campaigns in Iowa and New Hampshire.

Aides and fundraisers for McCain said donors are beginning to open up their wallets again and the campaign is raising money faster than it is spending it.

"We don't have to do it. We think it would improve our competitiveness if we do it," Davis said. "This helps us manage the cash flow."