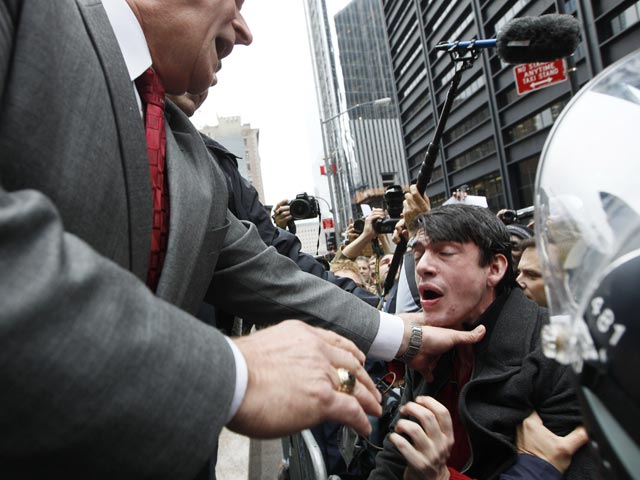 PORTLAND, Ore. - Don't set a midnight deadline to evict Occupy Wall Street protesters -- it will only give a crowd of demonstrators time to form. Don't set ultimatums because it will encourage violent protesters to break it. Fence off the parks after an eviction so protesters can't reoccupy it.

As concerns over safety and sanitation grew at the encampments over the last month, officials from nearly 40 cities turned to each other on conference calls, sharing what worked and what hasn't as they grappled with the leaderless movement.

In one case, the calls became group therapy sessions.

While riot police sweeping through tent cities in Portland, Ore., Oakland, Calif. and New York City over the last several days may suggest a coordinated effort, authorities and a group that organized the calls say they were a coincidence.

"It was completely spontaneous," said Chuck Wexler, director of the Police Executive Research Forum, a national police group that organized calls on Oct. 11 and Nov. 4. Among the issues discussed: safety, traffic and the fierceness of demonstrations in each city.

"This was an attempt to get insight on what other departments were doing," he said.

From Atlanta to Washington, D.C., officials talked about how authorities could make camps safe for protesters and the community. Officials also learned about the kinds of problems they could expect from cities with larger and more established protest encampments.

In Portland, for example, protests were initially peaceful gatherings. Then the city's large number of homeless people moved in, transforming the camp into an open-air treatment center for drug addiction and mental illness.

On Oct. 11, just five days after protesters set up camp, police chiefs who had been dealing with the encampments for weeks warned that the homeless will be attracted to the food, shelter and medical care the camps offered.

There were more tidbits, including the midnight deadline.

City police did exactly that when they evicted protesters during the day from two downtown parks over the weekend. Officers came armed with pepper spray, bean-bag rounds and stun guns, but didn't need to deploy them.

One protester says he was injured when he fell and police dragged him from the scene.

Going in at midnight "would have been a confrontation that really wasn't necessary," police spokesman Sgt. Pete Simpson said.

It was advice that came after the Oakland, Calif., protest was shut down Oct. 25 in a confrontation that turned violent. One protester, Iraq War veteran Scott Olsen, was badly injured.

In that city, where protesters' encampment was peacefully removed on Monday, city officials took part in strategy sessions with other big cities dealing with similar demonstrations.

Interim Police Chief Howard Jordan said he participated in a call organized by Wexler's group and has talked with officials in the New York police department's civil disturbance unit and high-ranking police officials in San Francisco.

He said a theme was how the atmosphere at the camps had shifted from a haven for peaceful protest to one for criminal behavior.

"Some chiefs had been tolerant of the progressive movement, but that all changed when the criminal element showed up," Jordan said. "As police, you can't allow anything that foster criminal activities in any city."

Jordan said that he and other police brass and city officials began planning last week for officers to remove the camp outside City Hall for a second time after collecting enough evidence that gang activity and an open-air drug market had emerged at the park.

The camp's removal became an urgent issue after a 25-year-old man was fatally gunned down on Thursday.

"We don't need any more evidence than that," Jordan said. "We had to step it up."

Mayors of mid-sized and large cities held similar calls twice last week, one of which was organized by the U.S. Conference of Mayors.

Portland Mayor Sam Adams said the primary issue among the mayors was how to get a message to a movement that didn't have any clear leadership. "A lot of time was spent on how do you effectively communicate with a group that doesn't have a leader?" Adams said.

Some departments didn't have to rely on the conference calls. Like most police agencies, they are constantly exchanging information.

Los Angeles police Cmdr. Andrew Smith said his department gets updates as much as several times a day from various sources, including other law enforcement agencies and media outlets that are monitoring the Occupy protests.

Some of the information shared among law enforcement officials included how many people are involved in the protests, if there have been any arrests and if demonstrators are planning any events. Smith said he was unaware of other agencies' plans to evict protesters.

In New York, where police cleared out a tent camp in a park near Wall Street that had become the center of the movement when it sprang up several months ago, authorities declined to discuss details of their talks with other agencies.

New York Police Commissioner Ray Kelly said the department had been in touch with police departments elsewhere, but that what works in one city may not necessarily work in another.

"We're sort of unique. I don't think you can look at one city . We have the ability to mass a large number of police officers," he said. "Some of these other cities quite frankly don't.

In Seattle, protesters initially gathered at a downtown park near one of the city's main shopping districts. After warnings that overnight camping wouldn't be allowed, several people were arrested when they wouldn't leave.

"Our response has been localized," police spokesman Sean Whitcomb said. "We're aware that other cities are going through other circumstances. Of course, we monitor the news.

"Ultimately we're acting on information that we have here, not with what's going in Boston or New York or Los Angeles," he added.