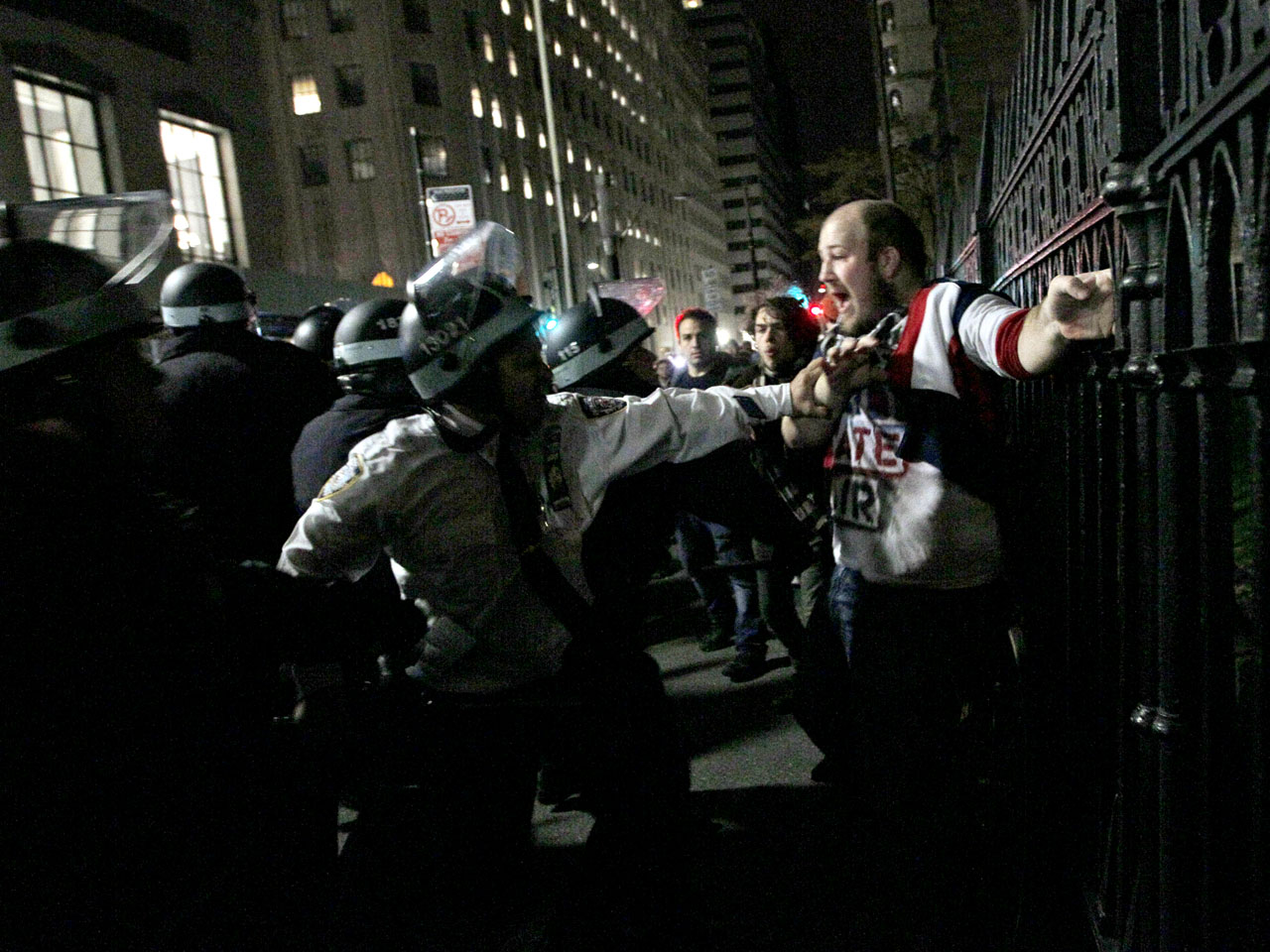 NEW YORK - Crackdowns against the Occupy Wall Street encampments across the country reached the epicenter of the movement Tuesday, when police rousted protesters from a Manhattan park and a judge ruled that their free speech rights do not extend to pitching a tent and setting up camp for months at a time.

It was a potentially devastating setback. If crowds of demonstrators return to Zuccotti Park, they will not be allowed to bring tents, sleeping bags and other equipment that turned the area into a makeshift city of dissent.

But demonstrators pledged to carry on with their message protesting corporate greed and economic inequality, either in Zuccotti or a yet-to-be chosen new home.

"This is much bigger than a square plaza in downtown Manhattan," said Hans Shan, an organizer who was working with churches to find places for protesters to sleep. "You can't evict an idea whose time has come."

State Supreme Court Justice Michael Stallman upheld the city's eviction of the protesters after an emergency appeal by the National Lawyers Guild.

The protesters have been camped out in the privately owned park since mid-September. Mayor Michael Bloomberg said he ordered the sweep because health and safety conditions had become "intolerable" in the crowded plaza. The raid was conducted in the middle of the night "to reduce the risk of confrontation" and "to minimize disruption to the surrounding neighborhood," he said.

By early Tuesday evening, some protesters were being allowed back into the park two by two. But they could each take only a small bag.

Still, some protesters believed the loss of Zuccotti Park may be an opportunity to broaden and decentralize the protest to give it staying power.

"People are really recognizing that we need to build a movement here," Shan said. "What we're dedicated to is not just about occupying space. That's a tactic."

But without a place to congregate, protesters will have a harder time communicating with each other en masse. The leaders of the movement spent most of Tuesday gathering in small groups throughout the city — in church basements and on street corners — and relaying plans in scattered text messages and email.

Robert Harrington, owner of a small importing business in New York, stood outside the barricade with a sign calling for tighter banking regulations.

"To be effective it almost has to move out of the park," Harrington said. "It's like the antiwar movement in the `60s, which started as street theater and grew into something else."

"The issues," he added, "are larger than just this camp."

Protesters milling around Zuccotti Park said they were dismayed by the court ruling.

Chris Habib, a New York artist, said he hoped the group could settle on a new protest site during a meeting later Tuesday evening. He was confident the movement would continue even if its flagship camp was dismantled.

"A judge can't erase a movement from the public mind," he said. "The government is going to have to spend a lot of time in court to defend this."

Pete Dutro, head of the group's finances, said the loss of the movement's original encampment will open up a dialogue with other cities.

"We all knew this was coming," Dutro said. "Now it's time for us to not be tucked away in Zuccotti Park, and have different areas of occupation throughout the city."

The aggressive raid seemed to mark a shift in the city's dealings with the Wall Street protests. Only a week ago, Bloomberg privately told a group of executives and journalists that he thought reports of problems at the park had been exaggerated and didn't require any immediate intervention.

The New York raid was the third in three days for a major American city. Police broke up camps Sunday in Portland, Ore., and Monday in Oakland, Calif.

The timing did not appear to be coincidence. On Tuesday, authorities acknowledged that police departments across the nation consulted with each other about nonviolent ways to clear encampments. Officers in as many as 40 cities participated in the conference calls.

When New York police began their crackdown at 1 a.m., most of the Occupy Wall Street protesters were sleeping.

Officers arrived by the hundreds and set up powerful klieg lights to illuminate the block. They handed out notices from Brookfield Office Properties, the park's owner, and the city saying that the plaza had to be cleared because it had become unsanitary and hazardous.

Many people left, carrying their belongings with them. Others tried to make a stand, locking arms or even chaining themselves together with bicycle locks.

Dennis Iturrralde was fast asleep on a cot when the shouting woke him up. Dark figures were running through the tents in the dim orange light of streetlamps. Something slammed into the cot, flipping him to the ground.

"They came in from both sides, yelling, `You have 20 minutes to vacate the premises!"' said Iturralde, a Manhattan cook.

Within minutes, police in riot gear had swarmed the park, ripping down tents and tarps. The air was filled with the sound of rustling tarps, rumbling garbage trucks, shouts and equipment crashing to the ground.

"They were tearing everything apart," Iturralde said. "They were hitting people, spraying people if they didn't move fast enough."

Around 200 people were arrested, including a member of the City Council and at least a half-dozen journalists. The arrested journalists included a reporter and photographer from The Associated Press who were held for four hours before being released.

Earlier in the day, another judge had issued a temporary restraining order that appeared to bar the city from preventing protesters from re-entering the park, but it was unilaterally ignored by the police and city officials.

In contrast to the scene weeks ago in Oakland, where a similar eviction turned chaotic and violent, the police action was comparatively orderly. But some protesters complained of being hit by police batons and shoved to the ground.

City Councilman Ydanis Rodriguez, who has been supportive of the Occupy movement, was among those arrested outside of the park. Police Commission Ray Kelly said Rodriguez was trying to get through police lines to reach the protesters.

"The law that created Zuccotti Park required that it be open for the public to enjoy for passive recreation 24 hours a day," Bloomberg said. "Ever since the occupation began, that law has not been complied with, as the park has been taken over by protesters, making it unavailable to anyone else."

The police commissioner said officers gave the crowd 45 minutes to retrieve their belongings before starting to dismantle tents, and let people leave voluntarily until around 3:30 a.m., when they moved in to make mass arrests.

"Arresting people is not easy," he said, adding that he thought the officers "showed an awful lot of restraint in the face of "an awful lot of taunting, people getting in police officers' faces, calling them names."

The ouster at Zuccotti Park came as a rift within the movement had been widening between the park's full-time residents and the movement's power players, most of whom no longer lived in the park.

Some residents of the park have been grumbling about the recent formation of a "spokescouncil," an upper echelon of organizers who held meetings at a high school near police headquarters. Some protesters felt that the selection of any leaders whatsoever wasn't true to Occupy Wall Street's original anti-government spirit: That no single person is more important or more powerful than another person.