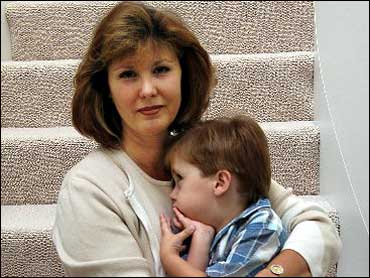 When Cynthia Papageorge found out she was pregnant, she expected to get plenty of support from her employer, one of the world's biggest sellers of maternity clothing.

But Papageorge said she was stunned when a Mothers Work vice president showed up at her office toward the end of her pregnancy and allegedly expressed doubts about whether she could fulfill her job duties because of her "condition." Papageorge was later out of a job.

"I was horrified. I was 37 weeks pregnant, and I hadn't slowed down despite my doctor's coaxing. I was very devoted," Papageorge said.

She has filed a lawsuit against Philadelphia-based Mothers Work and the vice president, Frank Mullay, alleging they discriminated against Papageorge because of her gender and her pregnancy. The suit seeks unspecified damages.

Mullay did not return a call seeking comment. The company defended its policies for expectant mothers and expressed confidence that it would prevail in the lawsuit.

Mothers Work has created a mini-empire out of maternity clothes, operating some 800 stores and about 150 leased departments under the Motherhood Maternity, A Pea in the Pod and Mimi Maternity names, as well as Internet sales.

Papageorge took the job in 1997 overseeing Mothers Work stores in the Boston area, Connecticut, and Rhode Island. In October 1999, Mullay inspected four district stores unannounced, and then told Papageorge to meet him at the Natick store where Papageorge was based.

He criticized housekeeping in three stores, and made several references to her pregnancy, suggesting it was interfering with her work, according to the lawsuit.

Within days, Mullay had allegedly ordered Papageorge's supervisor to fire her during her upcoming maternity leave. The reason was because she was pregnant, the lawsuit alleges.

The supervisor, Jan Dowe, refused. But about six months later, Papageorge said, she was put on leave and fired anyway after medical problems arose unrelated to her pregnancy. Dowe said she was also fired - after she, too, returned from vacation and maternity leave.

Dowe filed her own discrimination lawsuit against the company in California, where she was based.
By Theo Emery