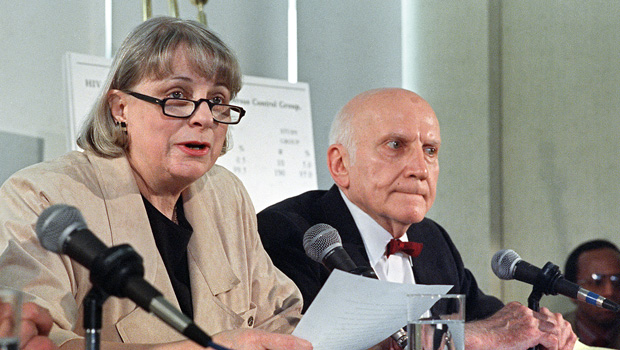 It wasn't enough that Masters & Johnson investigated all the questions about sex people were afraid to ask. As Martha Teichner now shows us, they then went ahead and told us what they'd found:

When TV was black and white and attitudes toward sex were, too, their book, "Human Sexual Response," detonated rather than just appeared.

The fact that a physician and his research assistant at that time had been doing laboratory studies of people actually having sex was eye-opening.

They seem so tame -- Dr. Bill Masters and Virginia Johnson, deliberately cooling down a hot topic.

"If one is looking for pornography, one's going to have a long look," said Masters in 1966.

"There's nothing of a very exciting nature in this book," said Johnson.

Oh, but there was -- and to their own story as well.

Thomas Maier, who wrote a biography of Masters and Johnson (called "Masters of Sex"), said the couple dealt with virtually every aspect of human sexuality.

"Instead of the male being the more powerful of the sexes, what they were clinically showing was that women actually had a greater capacity for sex," said Maier. "They found out that older people can enjoy sex."

Their studies were conducted in absolute secrecy at Washington University in St. Louis, to discover what happened to a woman during sex.

Soon after he hired Johnson, a divorced mother of two without a college degree, Masters pressured her to have sex with him as part of their work.

"She said that she really didn't want to have sex with him, but she didn't want to lose this job," said Maier. "In today's terms, that would definitely be sexual harassment."

But in 1970, Masters divorced his wife of 29 years, and almost immediately married Johnson.

By then, their names had long been linked professionally -- Masters & Johnson, like Procter & Gamble . . . a brand.

So, would Kolodny argue that Virginia Johnson deserved the equal billing she got? "Oh, absolutely," he said. "Her signal contribution to my mind is that she played a very key role in designing the approach to sex therapy that they took."

They reported an astonishing 80 percent.

The best part: The treatment only took just two weeks.

"Essentially what they did was they taught couples how to touch one another again, literally how to communicate physically, where it had broken down," said Maier.

Playboy's Hugh Hefner helped bankroll their work. As the national dialogue about sex became more candid, they informed the conversation, one way or another:

Johnny Carson: "You have just done what Masters and Johnson would call a premature ovation."

The laughter was good-natured, until the publication of their book on homosexuality in 1979. Masters was ridiculed for claiming that people could be converted from homosexuality to heterosexuality, his conversion results questioned.

Teichner asked, "Do you, in your heart of hearts, believe that at some level Dr. Bill Masters exaggerated, or fabricated [the conversion numbers]?"

And then came the bombshell: the couple who taught other couples about sex was getting a divorce, in 1992, after 21 years of marriage. Masters left Johnson for another woman.

"Regardless of the tragic way their love story ends, fundamentally, their story is about bringing medicine and science into the discussion of sexuality," said Maier.