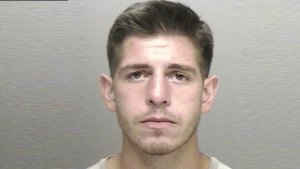 (CBS) QUINCY, Mass. - A 25-year-old Massachusetts man allegedly bragged to an undercover police officer that he was a wanted man, so now he's bragging about himself from behind bars, CBS Boston reports.

Boston Transit Police say William Mavrides of Weymouth struck up a conversation with the undercover officer at the Quincy Center MBTA Station on Thursday.

According to police, Mavrides was bragging about being a wanted criminal and said he would probably end up in jail soon.

Mavrides, who had outstanding warrants for witness intimidation, larceny, assault and battery, was arrested and taken to jail, the station reports.