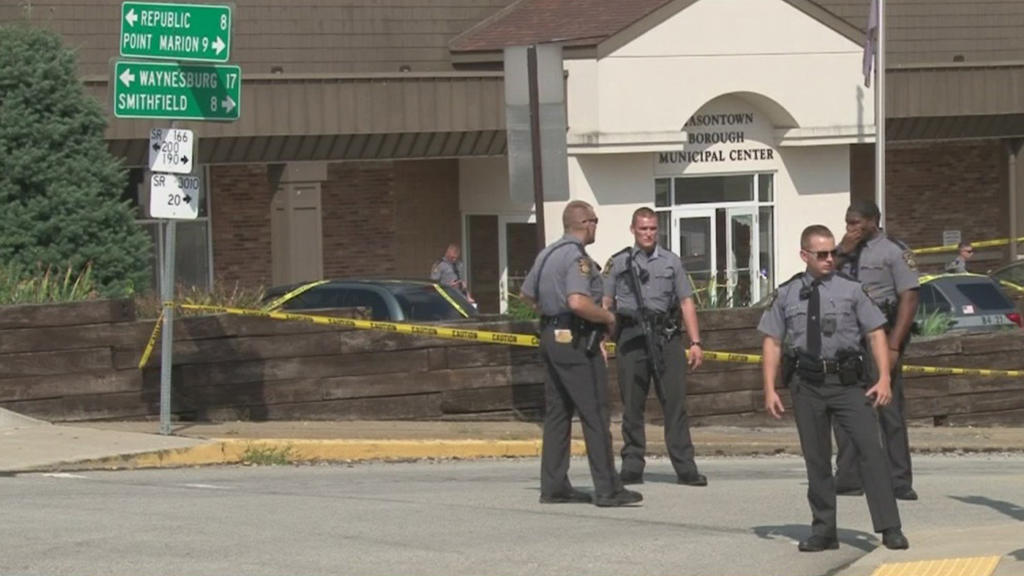 Four people including a police officer were shot after a man opened fire Wednesday in the lobby of municipal building near a judge's office in Masontown, Pennsylvania, state police said. The suspected gunman was also shot and killed by an officer at the scene, state police said.

State police would not identify the suspect, but said he was expected to appear in District Judge Daniel Shimshock's courtroom on Wednesday. The suspect had a protection of abuse order against him in regards to a domestic violence case.

There were about 60 people in the courtroom at the time, Grant reports.

Masontown Mayor Toni Petrus was at the hospital Wednesday afternoon checking on a Masontown police officer who had received non-life-threatening injuries during the shooting. State police confirmed via social media that the shooting happened about 2 p.m. Wednesday at the Shimshock's office in Masontown, about 60 miles south of Pittsburgh.

The 911 supervisor said two victims were flown to Ruby Memorial Hospital in Morgantown, West Virginia, by helicopter and another was taken by ambulance. The extent of their injuries was unclear Wednesday afternoon.

A witness told CBS Pittsburgh he was in the parking lot when he heard gunshots. When he turned around, he saw a woman running from a man with a gun.

"I was standing in the parking lot in front of the magistrate and I heard a gunshot or what seemed to be a gunshot," Xuan Sayles said. "I turned around and saw a guy with a gun and lady was five to eight feet away from the shooter and his gun jammed up. He was trying to get it to shoot again and it wouldn't shoot. So when he got it to shoot again, I took cover beside the magistrate.

Sayles said the suspect shot out the front door windows and continued to fire once he went inside the building.

"The shooter had shot the windows out as I was running to the cop, he was shooting through the glass doors," Sayles said. "Once he went in, I heard at least 10 shots."

The police officer was being treated for hand injuries at a hospital in nearby Uniontown.

Those inside the building attempted to take cover when they heard gunfire, CBS Pittsburgh reports.

"I'm watching the door, I'm crouched down against the wall, there are people to my left, people still flowing into the courtroom and the gentleman comes in, sweeps the room with the gun and it ends up being on me. I'm staring at this gun, staring at him and praying, 'Dear God, don't let this be my day,'" a witness said. "I've never looked down the barrel of a gun."

State police said the scene had been "secured" and there was no longer any threat.

A state police spokesman said on Twitter that all lockdowns at schools, offices and businesses had been lifted shortly before 4 p.m. They are asking for any witnesses to contact their local office.

At least one nearby elementary school was placed on lockdown after the shooting. The Masontown Elementary School officials redirected several student bus routes to the fire station for parents to pick up students.