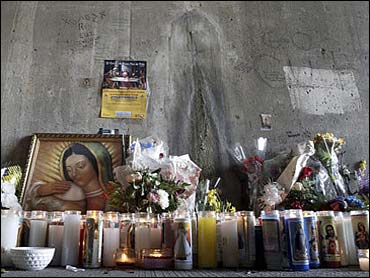 They say that seeing is believing. But sometimes it's a question of what you're willing to believe.

As Vince Gerasole WBBM-TV reports on The Early Show, in a week centering on the spiritual, when millions from around the world flocked to Rome as the new pope was picked, hundreds in Chicago have been taking part in their own pilgrimage, a procession to the site of what they call a miracle.

"I think, with everything happening in the world, maybe it's a sign that everybody should just start praying," says Patricia Villadonga.

Beneath the busy Kennedy Expressway, the faithful keep coming, day and night, just to be near what they believe is a viaduct vision of the Virgin Mary.

"I don't know how to explain it. but it's something beautiful. It really is," says Olga Davila.

They see the image holding a rosary, hands clasped in prayer.

A commuter on her way home from work first spotted the freeway fresco over the weekend.

Inspectors said it was probably just a stain from last winter's snow and road salt.

But as word got out, so many came that traffic was blocked. Barricades and understanding officers, though, turned the street into a shrine of sorts. That left plenty of time and space for reflection.

Not everyone is moved by the image that's come to be called "Our Lady of the Underpass."

One girl remarked, "They say there's a girl holding a rosary, but I can't see no one."

Yet others leave convinced of divine intervention, even if it's under the interstate.

Highway workers were all set to wash away the image, but since so many have come to see it, it's unlikely the anything will happen to the image anytime soon.