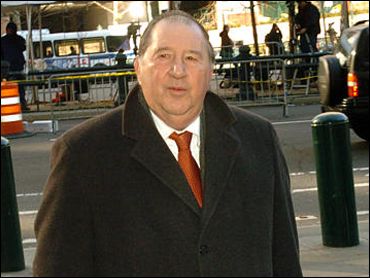 
Martha Stewart apparently selected her defense attorney with as much care as she selects the fruits she uses to bake her pies.

Whereas co-defendant Peter Bacanovic's attorney, Richard M. Strassberg, droned on Tuesday and had to apologize for his lack of precision, Stewart's attorney, Robert Morvillo, presented as fine a summation as I've seen in years. He reportedly charges $650/hour and for my money he is worth every penny Stewart has paid him to defend her in this stock conspiracy trial.

When Morvillo stepped up to the podium, the federal jury was shown the vast gulf between plain lawyering and great lawyering.

Such differences don't necessarily guarantee results, but they don't hurt the defense, either. Morvillo didn't just give jurors sizzle, he gave them some steak, too -- carefully and thoroughly rebutting the remaining conspiracy, obstruction and false statement charges against his client.

Although Stewart obviously stands to gain the most from Morvillo's magic, it ultimately may help Bacanovic.

Strassberg spent a huge portion of his closing argument trying to skewer the credibility of the main government witness, Douglas Faneuil, his client's former associate at Merrill Lynch, while Morvillo accomplished the task in just one word.

After pointing out that Faneuil had reached a particularly incriminating conclusion about Stewart and Bacanovic that only the most suspicious, cynical, conspiratorialist would reach: Morvillo labeled Fanueil "supersleuth."

Everyone laughed. The point was made -- a supremely concise way to dismiss the gravity of the prosecution's star witness; a fellow whom prosecutors themselves Monday called the key to their case.

No wonder the junior varsity from the U.S. Attorneys' office in Manhattan tumbled into the auxiliary courtroom late Tuesday morning to hear Morvillo speak. The next generation of leading prosecutors came with their conservative dark suits and slacks to hear what it means to be fantastic in court. You keep your friends close and your enemies closer, I guess.

Morvillo took aim and fired on charges of conspiracy.

Where prosecutors used the inconsistencies between the defendants as proof of their lies, Morvillo used them to argue that sharp, successful people like Bacanovic and Stewart certainly would lie better than the government says they did.

The logic of the defense case, he told jurors, is that innocent people make innocent mistakes; that the discrepancies between Stewart's version of events and Bacanovic's version of events were so "fundamental," they are proof the pair were neither in cahoots, nor laboring under guilty consciences.

You cannot obstruct justice, Morvillo argued, when you don't know you are obstructing anything. Following that logic, the fact that Stewart didn't know she was being investigated by the SEC in early 2002 means she couldn't have known she was obstructing that investigation when was questioned by federal lawyers.

To believe the government's case, he said, you would have to believe Stewart was willing -- even eager -- to ruin all that she had worked for to participate in a conspiratorial cover up of conduct that wasn't a crime.

Just before he finished, Morvillo challenged jurors not to reach a compromise verdict. "One count of conviction," he told them, and "it's over for us."

He means, of course, that a conviction on any of the charges probably means prison time for Stewart and certainly means a loss of her ability to run a publicly traded company. You've got to be my lawyers," he told jurors before turning them back over to lead prosecutor Karen Patton Seymour. Let Stewart "return to her life," he said, "... if you do that, it's a good thing."

Cases are rarely won or lost on closing arguments. By the time the lawyers get in their last words jurors typically have made up their minds, or at least have stopped listening to the same arguments made over and over again.

But this case isn't your average case and never has been; it's been a case that has teetered back and forth for weeks between chaos and order; between silliness and sanctity. If the government's case is as weak as I think it is, and if jurors are on the fence as much as I think they are, Morvillo's personality and skill may have just pushed them into the defense's yard.

And, win or lose, that's why he makes the big bucks.