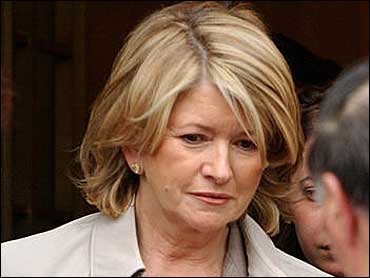 As Martha Stewart presses her case to convince the public she is innocent in a stock-trading scandal, her attorneys are gearing up for a trial that is likely months away.

Stewart was due back in a Manhattan federal courtroom Thursday, two weeks after she was indicted on five counts in connection to her sale of ImClone Systems Inc. stock in 2001.

Stewart and stockbroker Peter Bacanovic, also indicted in the scandal, were scheduled to appear for a status conference — a routine step for lawyers to take care of housekeeping matters in preparation for trial.

"Status conferences are almost always ministerial events, where the judge makes sure that the parties are all on the same page about how the case is going to proceed," said CBSNews.com Legal Analyst Andrew Cohen. "I'm sure there will be scheduling decisions made — although we may not get a trial date set — and by the end of the conference the logistical contours of the case ought to be in place."

Both Stewart and Bacanovic have pleaded innocent. They face charges including securities fraud, conspiracy, obstruction of justice and making false statements, and could go to prison if convicted.

Already, lawyers for the domestic maven are drafting routine motions, including one to dismiss the charges against her.

The federal courthouse in lower Manhattan planned additional security outside its front door, and barricades to keep photographers and camera crews together on the sidewalk.

While Stewart has not answered reporters' questions directly, she is using a Web site to proclaim her innocence. It includes supportive e-mails — Stewart claims to have received 55,000 — and a statement from her lawyers.

A Stewart spokeswoman declined comment ahead of the hearing. A call to Bacanovic's attorney, Richard Strassberg, was not returned.

The government claims Stewart sold because she was tipped by Bacanovic that the family of ImClone founder Sam Waksal was trying to sell its shares. Prosecutors say Stewart then lied to investigators about the sale.

Stewart maintains she had previously arranged to sell if the shares dropped below a certain price.

She is also accused of propping up stock in her own company, Martha Stewart Living Omnimedia, last summer by claiming she was innocent and was cooperating with investigators — claims the government says were false.

"I was a little surprised at that," said Richard A. Serafini, a former economic crimes prosecutor in New York. "There's kind of a natural tendency when you're confronted with something to deny it. Now they're charging it as market manipulation."

Legal experts said the charge is a high-risk move designed to convince a jury that Stewart hurt thousands of ordinary stockholders in Martha Stewart Living Omnimedia by trying to cover up her legal problems.

Stewart resigned as chairwoman and CEO of the media company hours after she was indicted. She plans to remain on the board and serve as its creative director.

Stewart was a contributor to CBS News' The Early Show until last summer.

The hearing comes a week after Waksal, Stewart's longtime friend, was sentenced to more than seven years in prison and ordered to pay more than $4 million. Waksal pleaded guilty last year to six counts in the scandal.